Eiffel tower reopens as WHO warns of Europe virus upsurge 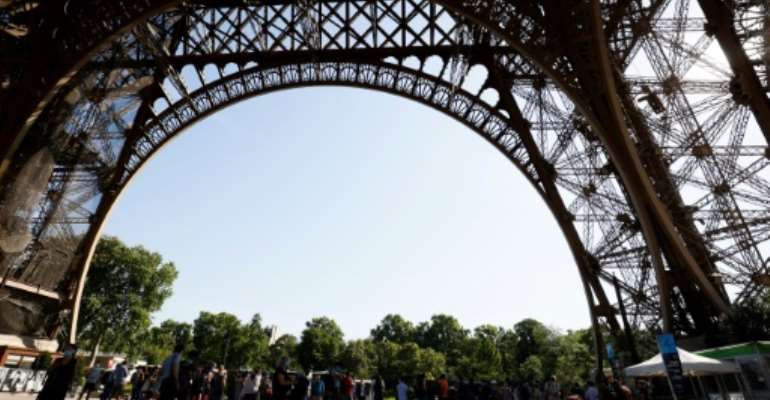 France reopened the Eiffel Tower to tourists on Thursday after three months of closure because of the coronavirus, ramping up attempts to return to normality even as the WHO warned the disease was resurgent in Europe and continued its rampage through the Americas.

Europe saw an increase in weekly cases for the first time in months last week, according to the World Health Organization's regional office, which warned that health systems in some countries would once again be pushed to the brink.

But the number of new cases in Europe is dwarfed by the Americas, where Brazil and the United States recorded almost 80,000 infections between them on Wednesday.

While some US states have moved to reimpose lockdowns, Brazilian expert Domingos Alves warned that his country was sending people "to the slaughterhouse" by reopening its economy too soon. 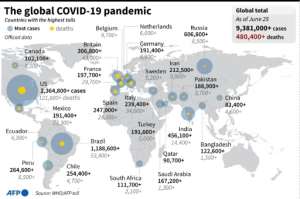 Graphic highlighting the countries with the largest number of COVID-19 cases and deaths since the start of the outbreak.. By (AFP)

Governments are still struggling to balance public health needs of fighting a virus that has infected almost 10 million people and killed almost 500,000 with the damage that lockdown measures are doing to their economies.

The International Monetary Fund is the latest to quantify the economic damage -- predicting that global GDP will plunge by 4.9 percent this year and wipe out $12 trillion over two years.

It said many countries would face recessions twice as severe as those caused by global financial crisis in 2008-2009.

In the face of the grim news, a few dozen mostly French tourists braved scorching heat in Paris to climb the Eiffel Tower's iron stairs as the lifts were deemed too small for social distancing. 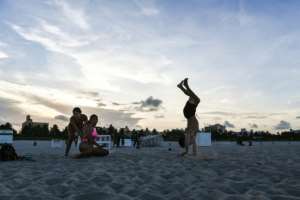 The US state of Florida has reopened its economy but still faces a surge in cases. By CHANDAN KHANNA (AFP)

"I'm tearing up, but they're tears of joy. I'm going to climb, but slowly," said Therese, 60, from the southwestern city of Perpignan. "And if I don't make it, it's no big deal!"

But the joyous reopening of an iconic tourist site was dampened by a new warning from the WHO that the virus is not yet done with Europe.

Some 30 European countries have seen increases in the past two weeks, said WHO regional director Hans Kluge.

"In 11 of these countries, accelerated transmission has led to very significant resurgence that if left unchecked will push health systems to the brink once again in Europe," he said. 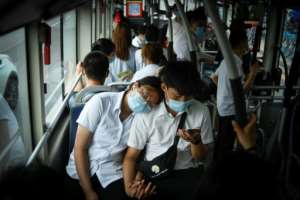 China, where the disease was first detected last year, declared that it had controlled an outbreak in Beijing that had briefly raised fears of a second wave. By WANG ZHAO (AFP)

Australia's Qantas announced it was cutting 6,000 staff -- one fifth of its workforce -- in a $10 billion cost-cutting blitz.

European airlines are faring little better -- the European Union gave its backing to a $10 billion state rescue of German airline Lufthansa, although the deal still faces a possible shareholder backlash as well as litigation from competitors including RyanAir.

In Britain, the Royal Mail postal service said it would axe 2,000 management jobs even though the COVID-19 had sparked as jump in demand for parcel delivery.

'Completely out of control'

The Americas is bearing the brunt of the human toll of the virus at the moment, with new cases in the south and west of the United States on an upward trend.

White House adviser Anthony Fauci warned the next two weeks would be "critical" to assess the country's ability to cope with surges in Florida, Texas and other states. 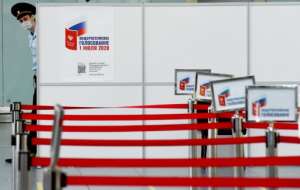 A postponed referendum on constitutional changes that could see Russian President Vladimir Putin stay in power until 2036 kicked off across 10 times zones on Thursday. By OLGA MALTSEVA (AFP)

Texas Governor Greg Abbott said the state, which was one of the most aggressive about reopening, could see new restrictions.

"If it's not contained in the next couple of weeks, it will be completely out of control, and Texas will have to ratchet back," said Abbott, an ally of President Donald Trump.

The total number of deaths in Latin America and the Caribbean surpassed 100,000 on Wednesday, with Brazil the hardest-hit country.

While the situation in Europe and the Americas continued to cause global concern, other more localised outbreaks in Asia and the Middle East also raised alarm bells.

Iran confirmed its death toll had surpassed 10,000 on Thursday, with health officials recording more than 100 daily deaths for the seventh consecutive day in the region's worst-hit nation.

China, where the disease was first detected late last year, declared that it had controlled an outbreak in Beijing that had briefly raised fears of a second wave and prompted restrictions and several million tests.

China's giant neighbour Russia, however, was making intense efforts to get back to normal life.

A postponed referendum on constitutional changes that could see President Vladimir Putin stay in power until 2036 kicked off across 10 times zones on Thursday, with masks and disinfectant gels on offer in polling stations.

Have Confidence In Me, I'm An Honest Leader — Akufo-Addo
17 minutes ago