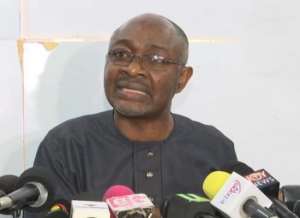 The Supreme Court has directed the state to mobilize funds and purchase four properties belonging to Alfred Agbesi Woyome who was wrongly paid GH¢51.2 million from the state.

This was after the court held that the Attorney General's (AG's) Department cannot transfer the property to the National Security Council Secretariat as it was seeking to do through its application before the court.

According to the court presided over by the Chief Justice, Justice Anin-Yeboah, and assisted by Justices Paul Baffoe-Bonnie, Samuel Marful-Sau, Nene Amegatcher and Gertrude Torkornoo, the writ of Fi Fa (legal instrument by which the assets of a judgement debtor may be seized) was already in action hence the AG cannot transfer the property to the National Security but can buy it and decide what it wants to do with it.

The court held that the state would have to purchase the properties through a public auction from the auctioneer.

Deputy AG Godfred Yeboah, therefore, decided to withdraw the application for leave to transfer the properties and it was subsequently struck out as withdrawn.

Meanwhile, the Supreme Court has completely stayed the hearing of a suit filed by Woyome at the High Court seeking to stop the sale of the properties.

The suit, the Chief Justice held, undermines the authority of the Supreme Court as well as 'frustrates' the ongoing sales process.

The AG filed an application seeking the leave of the Supreme Court to transfer the four properties to the state.

The application was filed as a result of challenges the licensed auctioneer is facing in the bid to sell the properties to offset the GH¢51.2 million Woyome fraudulently received as judgement debt.

The application is necessitated by the fact that the AG's department cannot on its own transfer the property to the National Security though it is another branch of government, as that would amount to defying the express orders of the Supreme Court for the properties to be sold through public auctions.

“The auctioneer has been encountering numerous difficulties in conducting a sale of the properties by public auction, as all potential buyers who express an interest in buying subsequently shy away citing a number of factors including the very circumstances of the instant matter,” the AG's application indicated.

The Supreme Court presided over by a single judge, Justice Alfred A. Benin, on July 2019, ordered the state to go ahead and sell four properties of beleaguered businessman Alfred Woyome to defray the money he fraudulently took from the state when the NDC was in power.

This was after the court found that Woyome had colluded with the defunct UT Bank to hide the properties from the state.

The properties include three residential properties – two at Trassaco Valley and one at Kpehe, as well as a quarry at Mamfi in the Volta Region.

The state has also indicated that it has discovered two more properties belonging to the businessman and would take step to sell them off.

The Ministry for National Security proposed that some properties belonging to Woyome be transferred to the state to offset the GH¢51.2 million fraudulently paid him as judgement debt.

The Ministry in letter signed by the National Security Minister, Albert Kan Dapaah, and addressed to the AG said they are proffering the advice due to the difficulties the auctioneer is facing in the sale of the properties.

The letter further pointed out that potential buyers are staying away from the properties some of which are located at Trassaco Valley, Accra, due to fears they could lose them in the event that there is a change in government.

Following challenges faced by the licensed auctioneer to sell the properties through public auction as ordered by the Supreme Court, the AG's Department is seeking the permission of the court to transfer the four properties to the National Security.

It further states that the National Security considers the location of all the properties as very vital for some of its operations and are desirous of assuming control and ownership of same.

“It is our respectful view that it will amount to the same if the National Security which is an organ of government acquires the said properties for its work, and the total values of the properties set off against the judgement debt,” the application added.