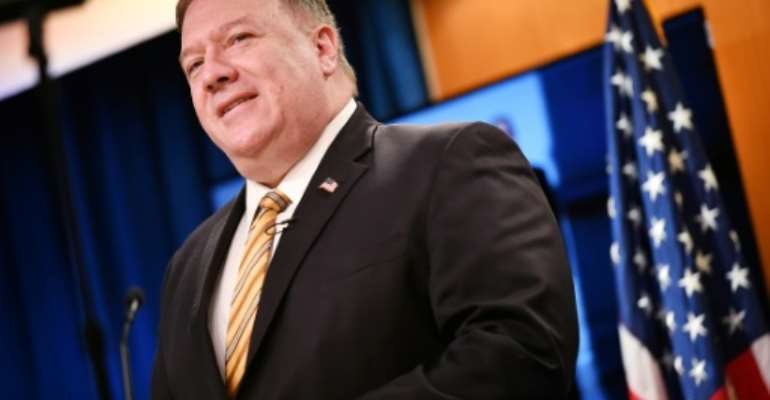 US Secretary of State Mike Pompeo tells a news conference that he hopes for a resolution soon with Sudan. By MANDEL NGAN (POOL/AFP)

US Secretary of State Mike Pompeo voiced hope Wednesday for a resolution in the coming weeks with Sudan, which said it expects soon to be delisted as a state sponsor of terrorism.

Pompeo said he spoke Wednesday by telephone with Sudan's Prime Minister Abdalla Hambok, a civilian whose near year-old government has been pushing to remove the designation by Washington that severely impedes foreign investment.

"We're working very closely with him to try and come to a solution so that we get the right outcome for their new leadership and for the Sudanese people," Pompeo told reporters.

"I'm hopeful that that will be forthcoming in the weeks ahead," said Pompeo, who was asked about the terrorism designation.

Sudan's Foreign Minister Asma Abdalla told AFP on Tuesday that the government was finishing a deal to compensate victims of the simultaneous 1998 bombings of the US embassies in Kenya and Tanzania.

Once the deal is complete, she said she expected the United States to move ahead with the delisting of Sudan "as soon as possible."

He welcomed Osama bin Laden and Sudan was accused of aiding the jihadists who carried out the bombings, which killed 224 people and injured around 5,000, almost all of them African.

Bashir was ousted by the military in April last year following months of protests and the new transitional government has sought to repair Sudan's international standing.

Pompeo was speaking at the launch of an annual US report on terrorism, which credited the new government's work with the United States and distancing from extremist groups.

The report, however, said that militants from the Islamic State group appeared to have an active "facilitation networks" in Sudan.

Sudan always denied any involvement but agreed to the settlement to fulfill US conditions.