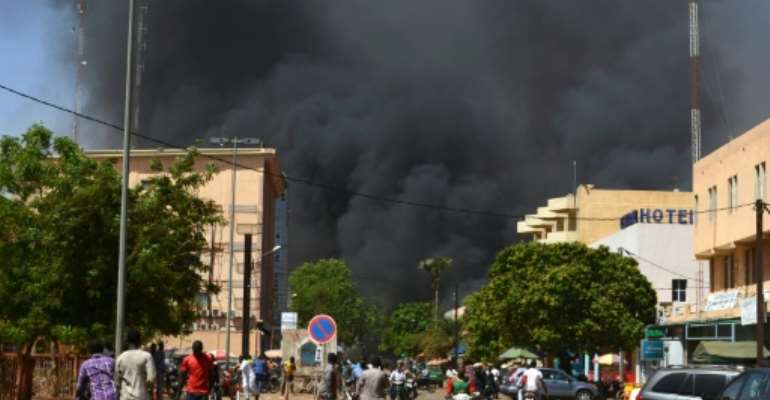 Smoke rises from the Burkinabe capital Ouagadougou from a jihadist attack in March 2018. Eight soldiers and eight assailants died, according to an official toll. By Ahmed OUOBA (AFP/File)

Jihadist attacks in Burkina Faso have killed more than 1,650 civilians and soldiers over the past five years, a local monitoring group said on Wednesday.

The armed forces were responsible for 588 civilian deaths, it said.

Jihadists carried out "at least" 580 attacks between April 2015 and May 2020, targeting schools, town halls, police stations, the army and militias cooperating with the state, according to the Observatory for Democracy and Human Rights (ODDH).

Of those attacks, more than 350 targeted civilians, killing over 1,200.

'Numerous other incidents were reported in the media and on social media networks, which suggests that the total number of attacks committed during this period is likely to be much higher," the ODDH said.

Of civilian deaths at the hands of the armed forces, "the overwhelming majority... were members of the Fulani community," the ODDH report said, referring to an ethnic herder group accused by other communities of complicity with the jihadists.

Burkina Faso, one of the world's poorest countries, has battled a jihadist insurgency since 2015 that spread from neighbouring Mali.

The north and east of the country are the regions most affected by jihadist killings, which have forced more than a million people to flee their homes.

The authorities have been unable to stem the spiral of violence despite the help of foreign forces, notably from France, which has 5,100 troops deployed in its anti-jihadist Barkhane force in the region.

Attacks in Mali, Niger and Burkina Faso killed at least 4,000 people in 2019, according to the United Nations.