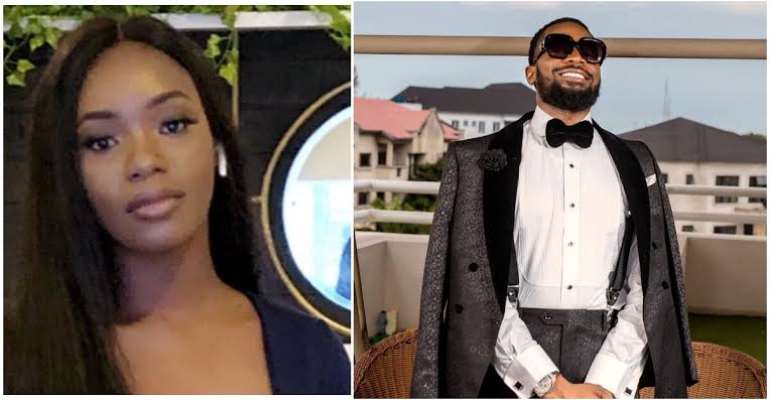 The lady who accused Dbanj of rape has finally opened up on her ordeal with the Nigerian police. This is barely thirty six hours after I released an informed report on the rape titled ‘Dbanj, Rape and the Police’ where I lambasted the irresponsible behavior of the police authorities in detaining her in police cell with criminals for over 24 hours.

The lady, Seyitan Babatayo, had revealed that she was detained for 48 hours with criminals and released into the hands of Dbanj, to delete her tweets, hide evidences and proofs of the rape, and turned her into an advert executive for the super star artiste.

I had argued in the report concerning the strange arrest that,

“This is the height of irresponsible behavior of the police. This lady was forced to delete her tweets, and turn to advert executive for Dbanj new music which she was said to be promoting on her social handle. The police abandoned this lady in cell with criminals; she was probably slapped and maltreated by the criminals. The lesbian inmates in the cell might have molested her. She was abandoned for more than 24 hours without any bath, against the laws of the land, because a wealthy artist was throwing money around”

“There is no rationale for Seyitan Babatayo to be arrested and detained in cell in the first instance. The police are trying to harass and intimidate her into submission. That is not the purpose hundreds of billions of naira is budgeted to the police annually, to harass and intimidate victims. There is no rationale for the lady to be forced at the police station to delete all her tweets, if not to cover up a crime.

“Dbanj had slammed a N100 million naira threat on an alleged rape victim. Let the law serve its purpose. Using the police again to detain and force the lady to delete evidences, in the midst of this national uproar, is an insult on our collective dignity, and that of all women. Let the police act responsible for once, and let the defenseless be defended. If at the end of the day, it was proven that the rape case was a set-up, let Babatayo face the music according to the statutes of the land”.

All these things stated earlier, and more have been confirmed by the lady, thirty six hours late in a press statement where she revealed her ordeals with the police, sparking another round of national outrage.

According to the victim, “On 16′ lune 2020, almost two weeks after going public with my story, I was arrested by four (4) armed Police officers, who, under the pretence as delivery agent, gained entry into my home I was then taken to IGP IRT office in Harold Shodipo, Ikeja and detained in a cell like a criminal My mum was not arrested, contrary to widespread speculations. My mum remained supportive and engaged all her efforts like any good mother, alongside various other interventions to secure my release

“In that cell, I had the right to remain silent, limited access to a lawyer, yet still oblivious to the crime I was being detained for I spent almost 48 hours at the Police station, without being charged for a single crime. When I requested to know the reason for the detention, the Police refused to answer, but they continued to treat me like a criminal.”

“D’banj through his legal representative published a document In response to my Lawyer’s document, demanding N100m in damages. 16″ June 2020: Four (4) armed Policemen stormed my apartment, and arrested me without a warrant. They seized my phones, other personal effects and detained me in the Police cell overnight at IGP – IRT Office at Harold Shodipo.

“With various efforts, I was released from custody after being made to sign a gag order by the Police and D’bani’s team, and could only post on social media what had been approved by D’bans’s team I spent the night in a location of Dbancs team’s choosing, which was not made known to the public.

“I was isolated from my family, coerced, pressured and intimidated in person by Dbanj and his team to retract all statements and to announce that my testimony was a publicity stunt. Thanks to my friend, thanks to the Executive Director of Stand To End Rape Initiative (STER), and other activists who swung into action, and tracked me to the location where I was being held by D’ban) and his team, using satellite mapping I was immediately removed from the environment and taken to a safe place where I was provided with immediate support. ”

I want to warn the relevant police, statutory and public authorities charged with dealing with rape cases that if they try to cover up this case, Nigeria will be visited with rape pandemic never seen in the history of the world. I am talking as a prophet, not a columnist and activist, that any attempt to apply the corruption factor to this rape issue will backfire on the already traumatized Nigerian nation state.

I have forwarded all Seyitan Babatayo’s statements to relevant international bodies that are monitoring the progress on the issue. As I said in the piece if Seyitan ‘s rape accusation is a set-up, let the law take its course, but from my own investigations, there was rape, there is an attempt to cover up, and the world is watching.

Rape must not be condoned in any sane society, CHIBOK girls were kidnapped and many of them raped to death, and the nation carried on as though nothing happened. I warned of the consequences in the piece titled ‘Chibok Girls, Boko Haram and Jihad of the Penis’, in 2014, and another follow up titled, ‘From Jihad of the Penis to Rape in the Church-Chibok, Dapchi, RCCG’ now the nation has birthed rapists everywhere.

Dbanj’s rape victim had opened up on ordeals with the police and it is not palatable, let the nonsense stop, and let the society protect victims of rape or else the zoo is headed for catastrophe.

Opinion
Powered By Modern Ghana
Eugene Osei-Tutu Writes: Act On The Carnages And End The Menace
The Museveni Govt Has A Lot Of 'Useful Idiots!'
I Want To Meet The Advocates Behind The "Let Us Write Bono Language Campaign"
The Manifesto Pressure: How The NDC Did It
Urbanisation In Africa: Creating Greater Access To The Customer?
Is Academic Examination In Ghana Becoming A Vehicle For Exodus Into The 'Corrupt Land'?
The People’s Manifesto: Pushing The Frontiers For Youth-Driven Governance Towards A New Ghana
Opinion: The Infectious Charisma Of Professor Opoku-Agyemang
Opinion: Caregiving, An Option To Solving The Youth Unemployment Challenge
COVID-19 Updates Live Dashboard
TOP STORIES