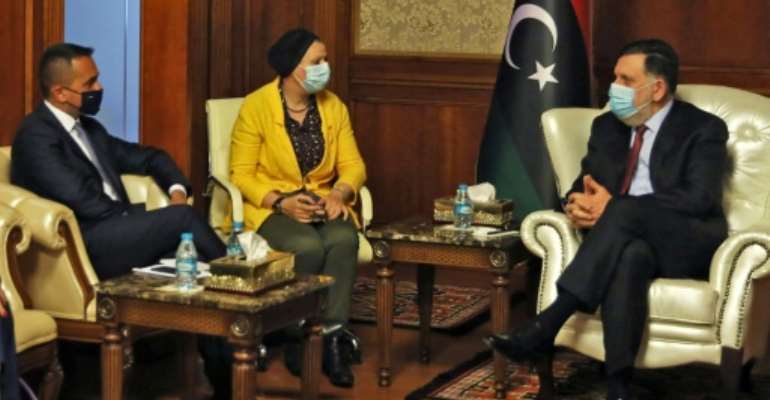 Italy's foreign minister met the head of Libya's unity government during a lightning trip to Tripoli Wednesday, weeks after the UN-recognised administration pushed back strongman Khalifa Haftar's bid to seize the capital.

Luigi Di Maio and head of the Government of National Accord Fayez al-Sarraj stressed "the need to resume the political process and end foreign interference" in Libya, according to a statement from Sarraj's office.

Referring to the Irini naval operation launched by the European Union in the Mediterranean to enforce an arms embargo on Libya, Sarraj said enforcement needed to be "global", covering maritime, land and air routes.

Sarraj, whose government has received weapons from Turkey, has previously criticised Irini on the grounds it favours eastern-based Haftar, who takes delivery of arms overland and via air.

Egypt, Russia and the United Arab Emirates have all supported Haftar.

Di Maio and Sarraj also discussed the struggle against illegal immigration, and Italian support for de-mining Tripoli's war-ravaged southern suburbs, according to the prime minister's office.

"We can't afford a partition of the country. That is why we went first to Ankara, a (diplomatic) channel we've always kept open," the source said, referring to Di Maio's trip to Turkey on June 19.

He last visited Libya in January.

Libya has been mired in chaos since the 2011 uprising that toppled and later killed long-time dictator Moamer Kadhafi.

The Arab League on Tuesday called for the withdrawal of foreign forces in Libya and urged talks on ending the conflict in the North African country.

The Turkish-backed GNA has recently made major military gains against Haftar's forces, rolling back his year-long campaign to oust Sarraj's administration from the capital.

Egypt has warned that advances by Turkey-backed forces on the strategic Libyan city of Sirte could prompt an Egyptian military intervention.

The GNA denounced Cairo's statements as a "declaration of war".