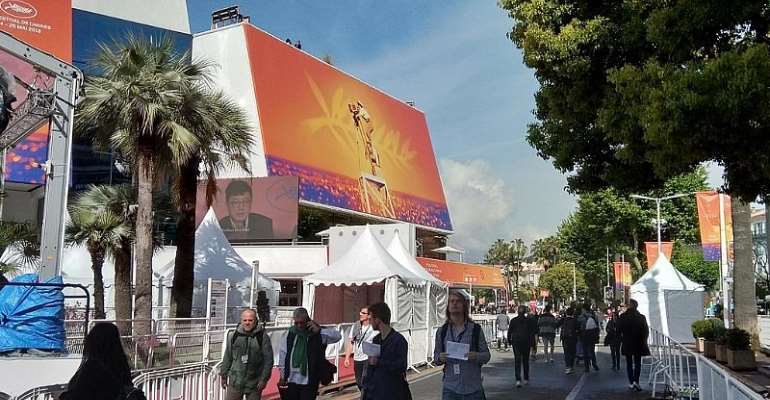 La Fabrique Cinema, a mentoring programme created by the Institut Français, and closely supported by the Cannes film festival, has selected ten projects by young filmmakers which will attempt to grab some of the limelight during this week's Marché du Film, the industry's virtual marketplace which opened on Monday.

Created by the Institut Français, a public institution designed to promote culture, La Fabrique Cinema has, over the last 11 years supported over two hundred filmmakers from around the world, on their first or second feature length films, with a particular focus on emerging film industries.

The Institut has surrounded itself with a host of partners for its ambitious programme, namely France Médias Monde (the parent company of RFI), the French composers and music editors society (Sacem), the International Francophone Organisation and Orange Studio.

Normally, the mentoring programme would've taken place in Cannes during the two- week festival, which was cancelled this year due to Covid-19.

Instead of face to face meetings, the members of the ten selected projects participated in an online coaching programme over a two month period (May-June), featuring masters classes with award-winning director Rachid Bouchareb (Indigènes, Cannes award for male cast 2006) and composer Béatrice Thiriet.

The highlight of the programme is the opportunity to promote their projects and exchange with industry professionals at the Marché du Film virtuel – the online profesional marketplace organised by the Cannes film festival, from 22-26 June.

The Institut français will host a virtual pavillion on the interactive platform called Cinemas du Monde to draw attention to these projects and help find financing and distribution.

This year's crop is especially diverse; 8 women, and 9 men from four corners of the globe, touching on subjects from historical secrets, to family life and sexual identity.

Sara Stijovic is from Montenegro, a 22 year-old documentary film graduate, is thrilled to have had the opportunity to represent a subject close to her heart at La Fabrique Cinema.

Her first feature film project Gina tells the story of Gina Markuš – a young woman who was imprisoned during the 1950's in Yugoslavia and sent to Naked Island to serve her sentence.

"Reading Gina's memoirs, I saw things and truth from the inside for the very first time. The other documents had been censored, sentences had been generalised, people had been scared to tell the truth," she told RFI, recalling the way she came across the story.

So many problems of today, she says, are linked to the trauma of yesterday, and making this film about a dark chapter of Balkan history is one way of confronting and dealing with the past.

The Covid-19 lockdown, was for her, like many of her fellow workshop participants, a gift in terms of precious time to dedicate to rewriting, re-writing, researching and developing new projects.

Sisters in Senegal
Iman Djionne, from Senegal, is also enthusiastic about her experience with La Fabrique Cinema and the opportunities to fine tune her skills as a director.

Djionne has already directed a successful short film The Boxer (La Boxeuse), which won several awards, and she has had unique opportunities of working on diverse projects such as Amin, by Philippe Faucon (La Quinzaine 2018) and the Amazon television series ZeroZeroZero.

Her first feature length film Coura + Oulèye is partially financed, and when the Covid-19 lockdown came in she had just completed some of the casting.

Although this period provided fertile terrain for her writing and research, she says she misses the physical process of filmmaking, on the set.

"Contrary to writing a book or painting a picture, filmaking is about collaboration," she told RFI.

"The most important thing is to surround oneself with a solid team with the same vision for the film as yourself."

Coura + Oulèye is the story of two sisters, born to different mothers with the same father, under the practice of polygamy which is fairly standard in Senegalese culture.

When their father dies, the teenage girls find themselves on a journey across the country to track down his testament, allowing them to get to know each other.

Although she is not speaking from personal experience, Iman Djionne says she felt it was important to tell a story through the eyes of young women, how family and community life shapes them, and the magic of sisterhood.

Women's perspective
Olga Korotko, originally from Kazakhstan, is the first person from her country to participate in the programme, and is keen to have the voice of women represented in the cinema world.

A Pair of Leather Clogs, her second feature film, is a comedy, that she has been working on with a French producer, a luxury considering her first project saw her write, produce and direct on a shoestring budget.

She explains that her original degree in psychology enabled her to better tell stories and develop characters in her film-making.

Olga Korotko says the says the contact with the other participants in La Fabrique Cinema has helped her improve her project which she hopes to shoot next year.

"I am able to see something in the script from a new angle and it helps to take the story to a new level," she told RFI.

Youth in Vietnam
Ash Mayfair, born in Vietnam, now based in New York, says the Covid-19 lockdown was one of the longest periods she has stayed in one place in the last five years.

It was a period which forced her to "pay more attention to the mental journey inwards," she explained to RFI, ideal for getting on with writing and research.

"Creatively, I feel energized and more aware than ever that I am only a part of a much larger network of human connections," she said.

La Fabrique Cinema enabled her to work on her second feature film Skin of Youth, an intimate, honest look at gender, stereotypes and the pressures young people face to conform growing up in Vietnamese society which doesn't necessarily accept them.

She identifies with being outsider, as a filmmaker she says that's part of being an artist.

"I think it is actually a gift for an artist to be able to walk on the margin. Being constantly on the peripheral of any social group afforded me the clarity to elucidate the essence of the human experience," she told RFI.

"The audience inevitably told me afterwards how much The Third Wife made them think of the lives of their own mothers or grandmothers. This is the reason why I make films. I want to touch people regardless of the cultural or linguistic boundaries."

She knows that whatever happens, a film, once out in the world, takes on a life of its own, beyond the desires and intentions of the director.

New horizons
In 2019 and the beginning of 2020, 8 films which participated in La Fabrique workshops were released in French cinemas, or selected in major festivals, and nine others were in post-production.

The whole industry is holding its breath, stumbling forward blindly after the Covid-19 crisis, which has radically modified the calendar of new releases, festivals and industry events.

With the rise of digital technology and online collaboration, who knows where the new voices of this brave new world will lead us ?