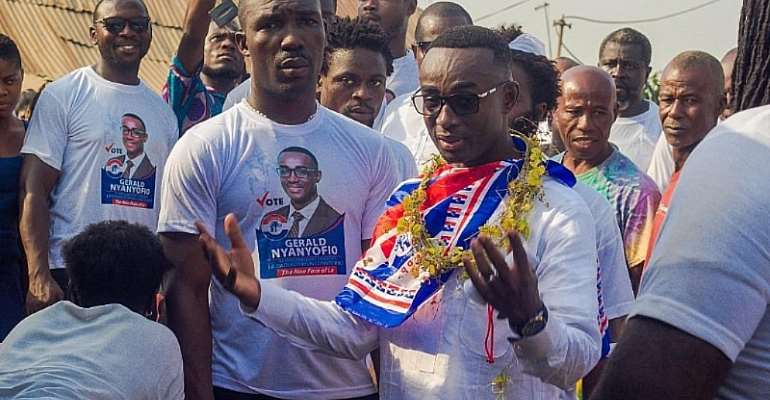 Mr Joseph Gerald Tetteh Nyanyofio, has debunked reports that there is bad blood between him and the incumbent member of parliament for La Dadekotopon constituency Mr Vincent Sowah Odotei aka Obama.

Mr Nyanyofio, the newly elected NPP's parliamentary candidate for the constituency, beat Mr Odotei in the parliamentary primaries held over the weekend, thus, denying him the opportunity to return to Parliament.

Mr Odotei, who is also a board member of Accra Hearts of Oak, got 376 votes as against Mr Nyanyofio's 543 votes.

The defeat of the incumbent has reportedly sparked tensions between the two of them.

But reacting to this in an interview on the Executive Breakfast Show (EBS) hosted by Benjamin Akakpo on Wednesday, 24 June 2020, Mr Nyanyofio said he has no problem with the sitting MP.

“Me having a problem with Odotei is a shade of someone’s imagination. It cannot be true,” he stated.

“I’m connected in a very deep way with the MP. My uncle married his aunty, so, his cousins are my cousins as well and he has been a senior brother to me all this while and we have maintained that mutual respect. Even, immediately after the elections, we had a hearty conversation where he pledged his support for me,” Mr Nyanyofio said.

He, however, noted that “the conflict and tension that characterised the election will be difficult to heal at some point” but “we are trying to build bridges among our various camps and I’m sure in the next week or so or the coming days, we will be able to see a stronger, more united party in the constituency”.

Mr Nyanyofio will be facing stiff competition from the main opposition National Democratic Congress’ (NDC) candidate for the constituency Rita Odoley Sowah in the December polls.