No Rush to Judgment 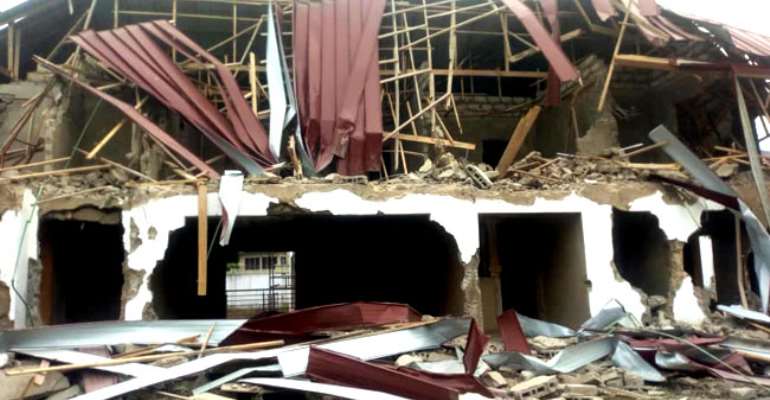 In the wake of media reports that a residential building under construction that was purported to be owned by Nigeria’s High Commission to Ghana had been massively wrecked, not demolished as such, by some assigns of the Paramount Chief of Osu-Accra – I thought the Gas had only one Paramount Chief, that is, the Ga Mantse. Anyway, a lot of criticism has been roiled up, largely having to do with the question of whether the alleged claimants to the land on which the badly damaged building sits could not have sought a conflict resolution or relief from the courts (See “Nigerian High Commission Is Taking Our Lands with Force – Osu Stool” Modernghana.com 6/22/20). We must also quickly point out that the Osu Mantse has also reportedly made the claim that there was already a building on the land in question that had been illegally pulled down by the Nigerians prior to the one which the latter had put in place of the former one, which has been badly wrecked. So that may be where the entire fracas began.

Now, I find the judicial recourse part of this narrative, or rather reasoning, to be very funny because Ghanaian courts are the last place, these days, that any bona fide Ghanaian citizen would want to turn to for redress of his or her grievances. The Nigerians must be well aware of this messy fact, thus the apparent decision by one of their nationals with close connections to the powers that be at the High Commission, we are informed, to recklessly cannibalize lands belonging to the Osu Paramountcy for private use without the proper recourse or adherence to laid-down protocol. At least the preceding is what, so far, the general public was being told at the time of this writing. Somebody, presumably an inveterate critic of President Addo Dankwa Akufo-Addo, bitched on the “Comments” tab of one of my columns about some strange animal species of international diplomacy called The Geneva Convention.

I promptly shot back to that arrant fool with the most logical answer – which was that the Geneva Convention did not authorize High Commissions and Embassies of foreign countries to literally and liberally encroach upon lands that they had not officially purchased for diplomatic activities in other countries or had not been duly and legally allocated to them by the governments of their host countries. The Paramount Chief of Osu, Nii Okwei Kinka Dowuona, VI, has publicly and categorically stated that the piece of land on which the badly damaged, some say “demolished,” building stands is Osu Royal Stool Land and not State Land or property. Nii Dowuona also, reportedly, says that a countless number of both verbal and written notices, including notices from the police, had been sent to the alleged owner of the building under construction on its Royal Stool Land over a considerable period of time without any response. The singular aim of these notices, we are told, was meant to find an amicable solution to the problem.

Then also, we are further informed that the Osu Paramountcy is well aware of the fact that the badly damaged real-estate property in question does not belong to the Nigerian High Commission, and that it was commercial property that the evidently rascally owner/intruder intended to use for either a nightclub or a restaurant or an unknown combination of some commercial venture. It is also quite fascinating that as of this writing, no official press release had been issued by the Nigerian High Commission vehemently protesting the wreckage, although Ghana’s Foreign Minister, Ms. Shirely Ayorkor Botchwey, has reportedly released a statement promising to have the matter promptly and thoroughly investigated and resolved. So, the savviest thing for all of us, members of the general Ghanaian public, to do right now is to wait for the results of the Foreign Minister’s investigations.

Personally, I decided to weigh in on this controversy because the Nigerian High Commission has had some run-ins in the recent past with some local Ghanaian authorities, including, if I recall accurately, some operatives of the present government. In the latter instance, the problem had to do with rental arrears that went back some five years, most of those years under the tenure of the previous John Dramani Mahama-led government of the National Democratic Congress (NDC). Indeed, as I vividly recall, that case had to do with some eviction notices that had been allegedly ignored for just as long as these arrears had been owed. The Nigerians were also bitterly complaining that documents belonging to the renter had been either taken out of the High Commission’s building or they had taken out of the building to an undisclosed location or chucked onto the streets or sidewalk in front of the High Commission, I forget precisely which the exact case was.

The Nigerian High Commissioner at the time also made a statement agreeing with the fact that, indeed, his diplomatic establishment was neck-deep in rental arrears going back some five years. He, however, promised that active plans were in progressive to have his country’s Foreign or External Affairs Ministry, which was to blame for such fiscal hiccups, to promptly settle these arrears in the offing. One does not suppose that both the extant High Commissioner, a man, and his staff, had not been paid for just as long. Clearly, there was some deliberate “nondiplomatic” game going on here on the part of the Nigerians. At any rate, I never really got to follow up on this event to ascertain the fact of whether, indeed, the aforesaid arrears had been fully settled by the Nigerians.

What I guess I am trying to imply here is that the Nigerians could shape up to become better kinsmen and neighbors of their Ghanaian hosts than they have, apparently, so far, shown themselves to be. Nuisances are the last thing that we expect our beloved Nigerian brothers, and sisters, resident in Ghana, diplomats or nondiplomats, to become to us, their hosts.

The author has 5299 publications published on Modern Ghana.