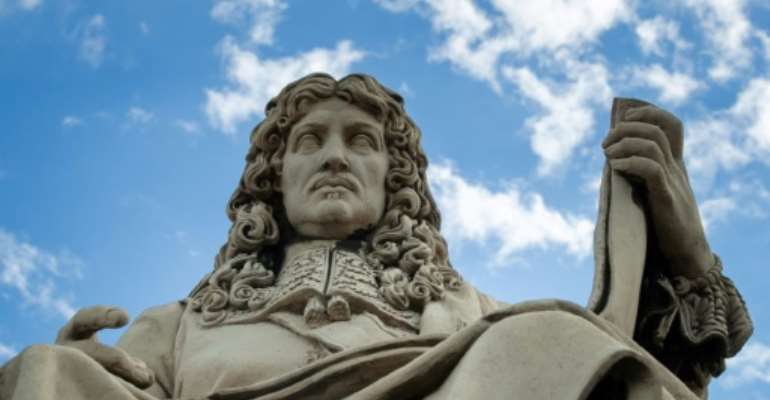 Jean-Baptiste Colbert was responsible for drawing up the notorious Code Noir (Black Code) governing slavery in the French empire. By JOEL SAGET (AFP/File)

A top French historian slammed President Emmanuel Macron on Wednesday for trying to shut down debate on the country's colonial past as a prominent statue linked to slavery was attacked in Paris.

Macron all but ignored the wave of Black Lives Matter protests in a major television address last week except to warn that France would not take down statues of controversial historical figures.

"The Republic will not wipe away any trace or any name from its history... but lucidly look at our history and our memory together," the president said.

But historian Nicolas Offenstadt pulled him up sharply, telling French radio that Macron had a made a "hugely damaging confusion between history and memory that will not help public debate in France."

His intervention came as politicians condemned an attack on a statue of the 17th-century statesman Jean-Baptiste Colbert in front of the French parliament, which was daubed with red paint and a slogan on Tuesday night condemning the "negrophobie d'Etat" (the state's fear of black people).

Colbert was responsible for drawing up the Code Noir (Black Code), a notorious 1685 decree governing the conditions of slavery in the French empire under Louis XIV, and for banning Jews from its colonies.

France "does not have the same history as the US. We are being judged on values that are not ours," he added.

Far-right leader Marine Le Pen said there should be no yielding to "the violent, excessive and brutal minorities" who want controversial statues removed.

"If we do that, we will have to take down everyone including Charles de Gaulle, and Napoleon would be the first to go," she said.

The emperor reintroduced slavery in French colonies in 1802, eight years after it had been banned under the French Revolution.

Napoleon reintroduced slavery after the French Revolution banned it in 1794.

But former prime minister Jean-Marc Ayrault said a hall in parliament that carries Colbert's name should also be renamed.

Government spokeswoman Sibeth Ndiaye, who is black, condemned the attack on the statue and said she was also against the "denial of what has been the history of our country".

With some in Macron's party supporting explanatory plaques on statues, she said "historians need to help us put the facts in their context".

Last week Oscar-nominated black filmmaker Raoul Peck accused France of being in denial of its racism, its colonial past and its wealth "built on the misery of others".

He said protesters who have taken to the streets in the US and France "are right to rise up. They are right to protest, they may even be right to smash everything," he added.

Offenstadt, who is best known for groundbreaking book on French soldiers shot by firing squad during World War I, said Macron had confused memory and history, two very different things.

He said memory, often symbolised in statues, is "something a lot more lived, more personal, subjective, chosen and more intense.

"We can unbolt a statue... that is not rewriting history. No one can rewrite history," Offenstadt said.

"But memory is something we choose and which we promote collectively," the historian added.

Offenstadt said Macron should have encouraged a wide debate between historians and the public and let people explain their problems with monuments linked to slavery and colonialism rather than try to close the argument down.

Between toppling a statue and keeping it in place there was a huge range of compromises, he argued.

Plaques, he suggested, could put them in context and offer other narratives; some statues could be moved to museums; others could be made to face off with counter monuments to show how history was disputed.

Macron admitted that colonial rule had left anger in its wake.

And he acknowledged that France had to fight against the fact that your "name, address, and colour of your skin" can affect a person's life chances.

But he insisted that France was a "nation where everyone -- whatever their origin and religion -- can find their place."

Many activists disagree however, with Human Rights Watch urging France to halt "abusive and discriminatory" police identity checks of black and Arab males.