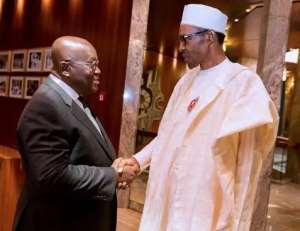 President Nana Akufo-Addo has apologised to Nigeria’s president, Muhammadu Buhari, following the demolition of a building on the premises of the Nigeria High Commission, according to Nigeria’s Presidency.

This was disclosed in a press release via a tweet from the Nigerian Presidency.

The tweet read: “President [Akufo-Addo] of Ghana [Tuesday] spoke with President [Buhari], expressing his sincere apology for the demolition of a building on the premises of Nigerian High Commission in Accra, Ghana.”

“In a telephone call, the Ghanaian leader told President Buhari that he has directed full investigation into the incident,” it added.

Armed men reportedly invaded the parcel of land on which the Commission was erecting a building on and pulled down parts of the said building in the evening on June 19.

This sparked outrage and protests from Nigerians home and abroad.

The Minister of Foreign Affairs and Regional Integration, Shirley Ayorkor Botchway was at the commission on Monday and also conveyed the apologies of the government.

She also assured that there will be a transparent probe into the incident.

“We will ensure that whatever the outcome is, we will not hide it from the people of Ghana or the people of Nigeria. It will be laid bare,” she said.

Two persons have since been arrested over the incident and been charged with conspiracy to commit a crime, unlawful entry and causing unlawful damage.