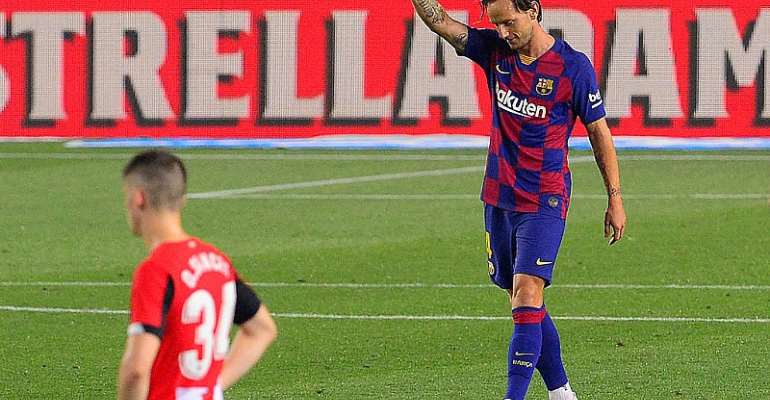 Barcelona have regained control of La Liga after a 1-0 win over Athletic Bilbao. Ivan Ratikic scored the only goal of the game at the Camp Nou in the 71st minute.

"We knew it was going to be complicated," said Barcelona boss Quique Setien. "Also because of the situation there is some anxiety because there's less and less margin for error.

"Sometimes we didn't play with that composure and that showed in the first-half when were more inaccurate than usual. We gave some belief and confidence to Athletic."

The match was billed as Lionel Messi's chance to score his 700th goal for Barcelona. But Rakitic emerged as the marksman, though Messi did have a hand in the goal.

Messi assist
After Athletic's defence failed to deal with his initial cross, the ball came back to Messi who passed to Rakitic.

The Croatia international rammed home past Athletic goalkeeper Unai Simon to register his 50th goal for Barcelona but his first since March 2019.

"It's a difficult period but we have to stick together," said Rakitic. "It was an important goal in a tough game. It was hard for us to open the game up.”

Real Madrid will leapfrog Barcelona if they win at relegation-threatened Real Mallorca on Wednesday night.

Zinedine Zidane's men have won all three of their games since Spanish football returned from a three-month lockdown imposed as the government fought the spread of the coronavirus pandemic.

Elsewhere in the top flight, Atletico Madrid continued their surge towards Champions League qualification by winning 1-0 at Levante. Diego Simeone's side took the points after Bruno Gonzalez put through his own net.

Atletico have taken 10 points from a possible 12 since the resumption on 11 June. With six games remaining, Atletico are six points clear of fifth-placed Getafe who were held to a 1-1 draw against Real Valladolid.

Donald Trump paid just $750 in tax during first year in offi...
28 minutes ago

Extend Voter Exhibition Exercise To Bring Back Register For ...
30 minutes ago