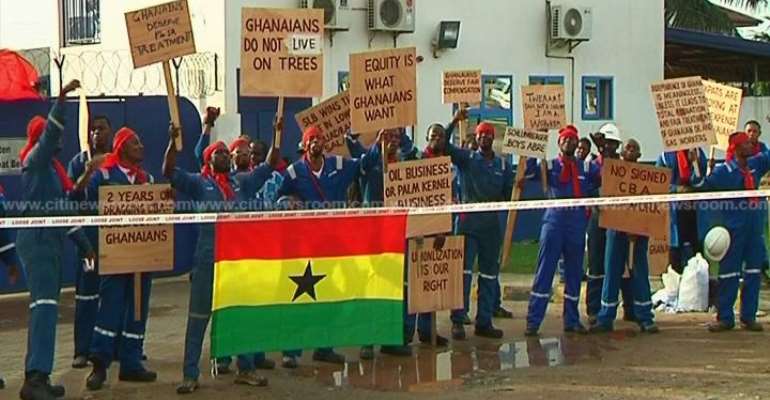 Suspended workers of Schlumberger, an international oil and gas service provider, are demanding full severance package as agreed in their 2016 Memorandum of Understanding.

The Chairman of the Schlumberger Workers Union, Bright Kwabena Dankwa, told Citi News that the company last month gave letters to about 60 of its Ghanaian workers to go on one year suspended employment without pay because of COVID-19.

He said it is not likely the company would recall all suspended workers. He said some might move on after one year without pay hence demanding full severance package, as has been given to their counterparts in Nigeria, instead of the 40 percent [severance package].

“Management served us letters last month to negotiate on a redundancy package. We met to negotiate, but after the third sitting of negotiations, management started becoming recalcitrant and also started issuing out unlawful letters of suspended employment without pay for one year to members. Some of the conditions in the letter are so appalling. So all we are trying to make management aware is that when we are on a negotiation table, you do not do such things. The moment you start doing such things, then you're putting us under duress to accept something that is not right. We have an MOU signed with management in 2016 which I took my time to read the document to management so that the document would guide all of us in our negotiations. They said that they have heard it, but instead of paying us our four-month consolidated salaries, they are choosing to pay us something around 40 percent of that. The union, including the national [union], rejected it since that cut is in breach of the MOU.”

The Schlumberger Workers Union Chairman told Citi News, their surprise is for Schlumberger to blame their actions on COVID-19 hardships hence they want the same package as being given to counterparts in Nigeria.

“When we asked why they are trying to cut our benefits, they said COVID-19. But this company has been making millions of dollars, in fact, one particular department can make 8 million dollars in revenue a month and this same company is telling us they are broke because of COVID-19. We should be fair to ourselves, when workers elsewhere have been paid their redundancy packages. Our point is that they should give us what is due us and let us go home. I don't know my future if I'm going to get a job now. We have expatriates that have gone home and paid almost 2 million dollars. In fact, they are cutting off about 60 percent of what is due us when in Nigeria they have paid all the workers, their due but why is it that when it comes to Ghana they do that? They took the matter to arbitration, as we speak, the Petroleum Commission and Labour Commission are not sitting because of this COVID-19.”

Bright Darkwa added that the about 60 suspended workers disappointment is with the Ghanaian Managers and lawyers who are aiding Schlumberger to cheat Ghanaians since there is nothing like suspended employment without pay in Ghanaian Labour Laws.

Even if Nana-Addo changes constitution and contest, Mahama w...
40 minutes ago