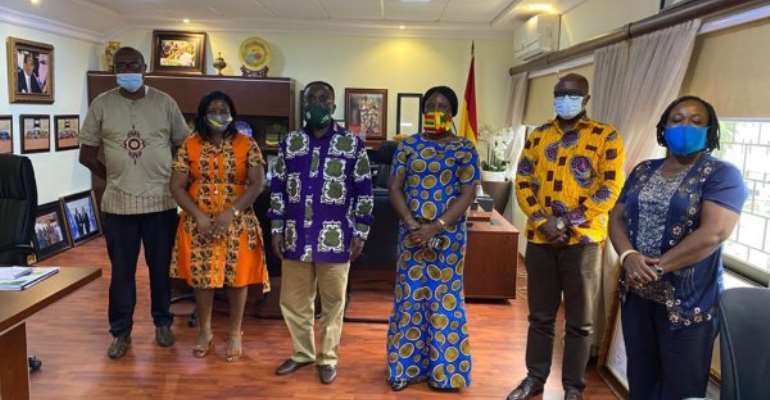 Dr Owusu Afriyie Akoto, Minister of Food and Agriculture has endorsed the new draft National Policy on Aflatoxin Control in Food and Feed.

The sector minister describes it as a timely document that will help in regulating cereals, especially maize that was in surplus.

The Policy, developed by the National Steering Committee for Aflatoxin Control (NSCAC), comes with a comprehensive action plan, expected to improve the harmonisation and coordination of activities among all stakeholders for effective management and control of aflatoxins in food and feed.

A delegation of the National Steering Committee for Aflatoxins Control [NSAC] paid a working visit to the Minister of Agriculture in Accra, where they presented the draft policy to the Minister to seek his endorsement.

In welcoming the team for a good work done, Dr Afriyie Akoto decried the fact that Ghana did not have enough warehousing and agro-processing facilities at present "to be able to handle the grains as we should have".

He said currently, his concern, was the many food surpluses produced by farmers and the threat of some going bad due to the lack of proper storage facilities and enough warehouses.

He however stated that the problem was being resolved in the interim through a partial outlet by the exportation of some of the surplus grains to neighbouring countries as well as storing the rest in some of the few ware houses across the country.

The Minister said because agriculture was being engaged in mostly by the poorest in society who did not have a voice to articulate their challenges the sector was being overwhelmed.

Admitting that Agriculture production was critical for the country, the Minister said the government came out with the Planting for Food and Jobs programme targeting the small holder farmers and providing them with the needed tools to increase their productivity especially in grains as a measure to addressing the challenges in the sector.

However, he said more needed to be done, stating that, Ghana was currently working to manage the surplus by adding value to generate more quality and high paid jobs through agriculture.

He said the government was also working to bring down machines for and agro-processes to package the surpluses of maize, rice and other grains.

He said the African Development Bank was consulted and agreed to provide working capital to millers to process the surplus grains.

Dr Rose Omari, Project Coordinator of the National Policy and Technical Regulation for Aflatoxins, explained to the Minister that the goal of the policy was to protect human and animal health and also increase the income of food value chain actors by reducing aflatoxin concentration in food and feed.

Dr Omari, who also doubles as a Senior Research Officer, Council for Scientific and Industrial Research- Science and Technology Policy Research Institute (CSIR-STEPRI) said copies of the Policy would be presented to other three stakeholder ministries.

They were, the Ministry of Health, the Trade and Industry Ministry, as well as the Ministry of Environment, Science, Technology and Innovation for their endorsement too, and to seek leadership among the four implementing ministries on the implementation of the Policy when it was finally approved.

However, groundnuts and maize were the most highly affected staple food products in the country.

The exposure of human and livestock to very high levels of aflatoxins is said to result in acute health effect known as aflatoxicosis.