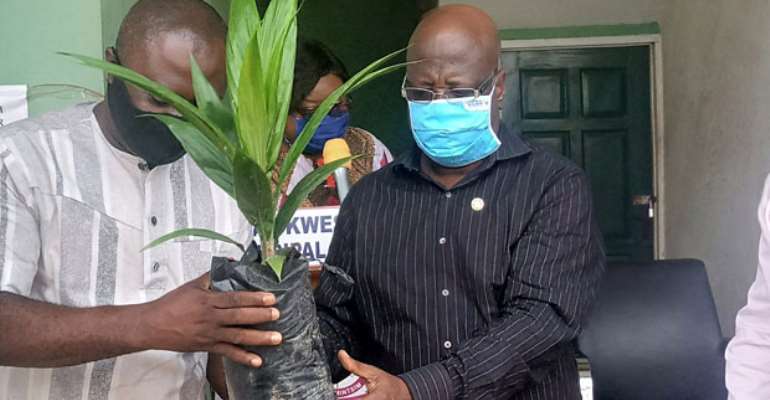 The Effia-Kwesimintsim Municipal Assembly (EKMA) in the Western Region will be distributing 10,000 each of improved and disease-free oil palm and coconut seedlings free of charge to farmers in the area for planting.

The initiative, which is under the government's Planting for Export and Rural Development (PRERD), is aimed at promoting rural economic growth and improving household incomes of rural farmers through the provision of certified improved seedlings.

At a brief ceremony to hand over the first 2,000 of the seedlings to the farmers, the Municipal Chief Executive, Kojo Acquah, said the assembly established the coconut and oil palm nurseries based on the preference of the farmers and the ecological conditions of the area.

He explained that the economic potential of the two crops had been found to be very enormous.

According to him, the government's PERD programme also seeks to create sustainable raw material base to spur up the decentralized industrialization drive through the 'One District, One Factory' initiative.

He stressed that the implementation of the programme would reduce poverty and improve livelihood in the municipality.

“This can be done through the development of solid agricultural value-chains of coconut and oil palm to feed the local industries and for export,” he said.

The Municipal Director of Agriculture, Fredrick Ansah, indicated that the PERD programme was based on the comparative advantage of all metropolitan, municipal and district assemblies (MMDAs) across the country.

He explained that the comparative advantage of the municipality were oil palm and coconut, hence the assembly's decision to nurse the seedlings for onward distribution to the beneficiary farmers towards the realization of the government's vision.

Some of the farmers expressed their gratitude to the government for providing the seedlings and the technical assistance and appealed for the sustainability of the PERD programme.