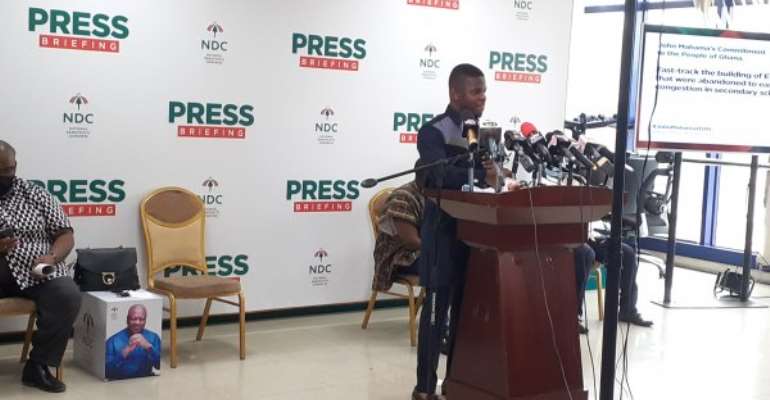 The opposition National Democratic Congress (NDC) on Monday said it will offer free technical and vocational education from the second cycle to tertiary level to build the human resource base of the country.

The Party said a strong and robust technical and vocational education was critical to addressing the growing youth unemployment and therefore the need to prioritise that sector for rapid industrialisation and development.

Mr Sammy Gyamfi, the NDC National Communication Officer, said this at a press briefing in Accra.

He gave the assurance that the Party would pay all customers of the collapsed financial institutions whose monies had been locked-up and would restore indigenous Ghanaian participation in the financial sector.

Mr Gyamfi said the NDC was committed to reducing the size of government by at least 40 ministers to bring down government expenditure and channel more resources into the productive sectors of the economy.

“The Party will institute a National Apprenticeship Programme in line with the vision of rapid industrialisation and job creation for the country.

On the health sector, the NDC National Communication Officer said when elected into power, the Party would construct a regional hospital for each of the six newly-created regions and the Western Region.

It would also ensure improvement in access to quality and efficient health care delivery and provide districts without hospitals with fully-equipped modern health facilities.

“In addition, we will take healthcare to the doorsteps of the people by building a first of its kind “Onipa Nua” Hospital Ship and deploy it to provide medical services to the inaccessible riverine and fishing communities on the inland Volta water ways,” Mr Gyamfi said.

“We will rehabilitate the “Onuador” mobile vans that have been abandoned by the current government and procure more, to provide medical outreach services in underserved and hard to reach areas in all the 16 regions of the country”.

Mr Gyamfi said the Party was known for its infrastructural development and as such would construct two new international-standard Infectious Diseases Centres and two additional international research centres.

On education, he said the NDC would abolish the double-track system of secondary education through an emergency and massive infrastructure drive.

“This will ensure a conducive environment and one-track qualitative learning experience for the Senior High School students.”

The NDC Communication Officer said the Party would abolish the mandatory national service and the licensure exams for teacher trainees and restore their automatic employment.

No teacher trainee graduate would be denied posting or employment under the next government of President John Dramani Mahama, who would prioritize the promotion and welfare of teachers.

Among other interventions the Party pledged to execute the distribution of free cocoa fertilizer and chemicals to cocoa farmers to boost yield and improve their welfare.