Osu Asafoatsemei Warns Chieftaincy Minister To Sit Up Or Else... 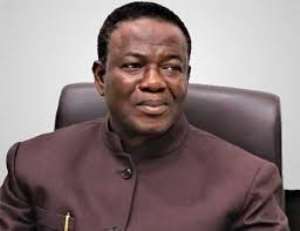 The Asafoatsemei of Osu has bemoaned the lackadaisical approach of the Ministry of Chieftaincy in resolving their long standing Stool dispute.

In a press statement signed by the Asafoatsemei and released to the press, it indicated that the people of Osu especially the youth being good citizens and believing in the rule of law have had to exercise a lot of restrains over the years which appears not be yielding any dividends with respect to the Ministry’s approach to resolution.

They are by this statement cautioning the Minister to sit up and do the needful before mayhem is sparked in Osu.

Below is the full text of their statement

forced and unwarranted imposition of a usurping OSU Mantse on Osu by some known politicians and their operatives in 2009.

We, the Asafoatsemei of OSU, have exercised patience for years on the advice of the Osu Dzaase, the kingmakers, as they continue negotiations towards resolving the issue with the statutory chieftaincy institutions empowered to resolve such disputes. Till date, our patience has not been rewarded with a peaceful resolution, but seems to have rather emboldened someunscrupulous characters.

We the Asafoatsemei from the four quarters of Osu congregated and reached a unanimousdecision, to by this release, charge the government and give the relevant statutory institutions an ultimatum to resolve this troubling impasse in Osu. The detrimental nature of the situation has necessitated this action.

Osu which also hosts the seat of government has suffered under the previous administration and the same is happening under this very government. The fraudulent imposition of Kinka Dowuona on the people of Osu is creating hardships that no person can justly be asked to bear.

We the OSU Asafoatsemei represent the interest of the people of Osu, both the elderly and youthful, and we are aware of the massive suffering of our people because we live among them and bear witness to the harrowing nature of the situation.

We have been denied and have been robbed of our inheritance, and we have been left to our fate to suffer for no wrong doing of ours. Our elderly cannot afford healthcare, utilities, food etc.

The young are left wallowing in poverty with no education, skills training, nor job opportunities to earn an income to care for themselves and their families. Osu has not benefited from a facelift since this usurper came into the picture. Infact, in terms of development, we have retrogressed.

A situation like this lends itself to breeding social vices including drug abuse, prostitition and other immoral acts. The lives of our youth are in danger as they lose their prime and energetic years through no fault of theirs, but by virtue of a bad and corrupted traditional leadership.

We are by this publication calling on the MINISTER OF CHIEFTAINCY TO COME CLEAN ON THE OSU CHIEFTAINCY MATTER, we are aware of his relationship with kinka Dowuona the usurping OSU Mantse who has also fraudulently obtained presidency of the Greater Accra Regional house of Chiefs.

We are also calling on the respectable Chiefs at the National House of Chiefs to institute an investigation into how Kinka Dowuona's gazette was acquired. These actions will go a long way to alleviate the suffering of the people of Osu, and put these eminent chiefs on the right side of history.

We have come to the cross roads, we have had enough, and we shall act by redeeming, protecting and giving life back to our people. Our frustration has burst its banks and we can no longer sit idly by whilst our people pay for the selfish acts of a few persons.

Today we implore you peacefully. We think it ill advised to ignore us as every peaceful demonstration has its limits. This bears witness to the whole world that we are for a peaceful resolution but were ignored by the powers that be. We urge you to stand with the people on the right side of history so that posterity may be kind to your legacy.

Signed by the Asafoatsemei of OSU