Fatherhood: Compassion And Competence (Power): “Give Them Something To Eat” 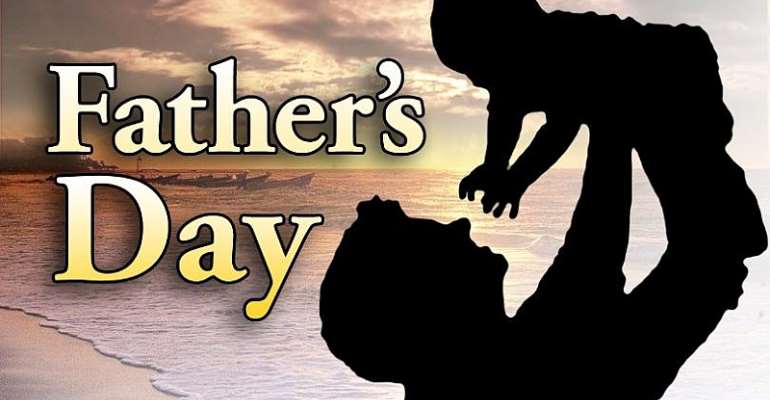 The world is celebrating fathers at a time when there are many missing links in fatherhood. About fifteen years ago, I read an interesting book by Herbert Armstrong with the title, “The missing dimension in fatherhood. In the book, Armstrong bemoaned the demise of godly fatherhood in human society. I am personally convinced that while the world can outsource everything to artificial intelligence, fatherhood cannot be outsourced to anything. It is, therefore, right that we are celebrating fathers today.

Since morning, I have read some messages from friends and students wishing me well. The kinds of messages I have received today were heart-warming. At the same time, I have been reflecting on what it means to be a father.

As an Akan from Ghana, I understand fatherhood quite differently from many cultures. Among the Akan, there are fathers, not father. There are practically two types of fathers among the Akan, which may be shared by other ethnic groups around Africa. Broadly, fatherhood is divided into two categories: Pater and genitor. Pater is a social father; while genitor is a biological father.

A pater is not a biological father, but one who provides care; whereas a genitor is a biological father, who may also provide care. If the Akan wanted to probe to differentiate between pater and genitor, he would ask the question: "Is this child the product of your penis?”

But given the matrilineal social structure of the Akan, pater was usually emphasised. Fathers providing social service is rated high among the Akan. But the Akan believed in a theocentricity in fatherhood. Among the Akan, it is believed that a child is protected by his father’s spirit. It is this that explained the dreadfulness with which the Akan viewed absentee fathers. This is precisely because of the mystification of the relationship between father and child.

But the question of paternity is usually asked when there is a dispute over the care of a child. But in my own family, I saw my father, Anthony Prempeh, as a great person. He had little education. He never appeared to have had enough money. He never bought a land. He never owned a car. He never demonstrated religious fanaticism. He hardly argued over anything. He was not given to partisan politics. He rather had passion in telling me about the history of Ghana and Africa.

But there is one thing my father had which surpassed everything else: He was a man of integrity. He was the type of father who never gave my mother any trouble whatsoever. He never drank, womanised, nor smoked any substance. For about thirty years that he fathered me on earth, I never saw him quarrelling. He was a man full of intelligence. He loved education and did his best for all my siblings.

His integrity was a hallmark that people testified. Many times, his co-workers at the Kanbros Pharmacy, where he was in charge of performing the daily task of sending the pharmacy’s money to the bank, would complain to my mother that my father was the reason we were struggling. One day, one of his co-workers drove to our house and told my mother, “Ama, Mr Prempeh is the reason you and the children are struggling. He does NOT steal.”

As children, we never understood why we never appeared to have enough. But one thing I knew was that while there were many very wealthy people in my father's family, there was never a single time he marched us to those people for help. Astonishingly, some of these individuals could be counted among the richest in Ghana. Instead, my father introduced us to an economic independent life at a very young age. He encouraged us to work to take care of ourselves. We were all introduced to petty work of making money while we were still in basic school. Consequently, throughout my life, I never depended on anyone for school fees or assistance to pay bills. I have always loved to spend within my limit.

But one thing my father gave me (us) was education. He was my first teacher. Sometimes he was very impatient with my progress in school, especially when I was in lower primary. As part of shaming me, he would call another boy (Obed), who was my junior to solve questions I was struggling with. He would also deliberately bring my cousin's (Nana Yaw Adei) terminal report home to shame me for performing poorly in primary school.

But in all of this, I was challenged to work hard. This was to the extent that while I had plans of becoming a professional footballer, I decided to take to academics. One reason that pushed me into academics was people constantly telling me about how intelligent my father was when he was in school. Usually, some of his friends would tell me whenever they saw me playing around, “You are unlike your father. He is a very brilliant person.” Such comments challenged me to work hard on my studies.

Given the difficult life my father had (probably because he was the posthumous child of his father), his death destabilised me and everyone who knew him. But, thank God, he lived to see my graduation from the University of Cape Coast (UCC) in 2008. The important thing about his death was that he died peacefully at home at the age of 65 years on December 13, 2008. He never felt sick. But he appeared to have predicted his death when he told my mother, upon my graduation from the UCC in September 2008 was that, "Now that Kofi has finished, I think I am done!"

With these words, my father passed on gloriously to be with the Lord. When our co-tenets realised my father had died, they praised the Lord saying, “Allahu akbar, this man’s death is desirable. We must all wish for such peaceful ends of life.” At the mortuary, one of the undertakers told me, “I don’t joke with your father’s body, because it portends many blessings.” So, while we paid less for the services of the undertakers at the Police Hospital Mortuary, my father’s remains was given the best of treatment.

Since I promised my father on December 9, 2008 to reach the apex of the academic ladder, I proceeded with my MPhil in African Studies at the Institute of African Studies (University of Ghana) after his death and graduated in 2011. I dedicated the prestigious Agyeman Duah award I got from the Institute of African Studies in 2010 for academic excellence to his memory. Dada, may you continue to rest in the peacefulness of the Lord! You are fondly remembered by all your children, from Patrick Adjei, Frederick Prempeh, Sarah Adjei, Rebecca Ama Aduah, Eric Kojo Amponsah, Dorcas Prempeh, and Deborah Prempeh (a set of twins).

But as I reflect on my father, I have a quintessential father who has unsurpassable compassion and competence (power). In Mark chapters six and eight, we read about Jesus Christ demonstrating compassion and competence (power) simultaneously in dealing with an existential challenge – hunger. He spoke to so many people about His glorious Kingdom. At each event, persons who had followed Him were hungry. As God, He would express compassion by commanding His disciples: “Give them something to eat.”

The disciples would usually respond in despair, “We have nothing to give them.” At that point, Jesus would demonstrate stupendous command over nature, by multiplying limited food to feed thousands of people. Usually, such acts of compassion demonstrated the mission of Jesus Christ: He came that we may have life and have it abundantly.

In our world today, we most often have compassion, but we lack the competence (power) to carry through our compassion. In the face of the coronavirus (COVID-19), we have seen many world leaders demonstrating compassion, but they have limited competence (power) to carry through with their plans of saving life. Like my father, many fathers have compassion for their children, but the challenges of the world are so daunting that they are unable to follow through with their compassion.

But as we celebrate fathers' day, I am reminded about Jesus Christ who has the power to bridge the boundaries between compassion and competence (power). He can bring to pass all that He has said about us. It is He alone who is rich in everything and yet became so poor that we (the elect of God) may have His riches. In a world that plied on heroism and the inflation of egocentricism, Jesus’s condescending to the level of humanity to solve our fundamental challenge – spiritual hunger – was/is epochal in history.

As a Christian, my hope is not in this world. My hope is in Jesus Christ and the world to come. I am encouraged to work hard. I am encouraged to contribute to making the world better for humanity. But I do not lose sight over the fact that I am only a pilgrim on earth. I do know that my native home is where my Lord and saviour Jesus Christ is. My native home is where compassion and competence (power) will merge to dispel all anxieties.

Many of us many have fathers who did not care for us. Some also may have fathers who had compassion, but were limited in pushing through with their good plans. Some of may have been born as posthumous children of their fathers. But in all of this, let us always know and remember that we have Jesus Christ who never suffers from compassion fatigue. He is always ready to supply us with our needs. His heartbeat is for us to desire Him all the time. He is always inviting us to Himself. His is the fountainhead of compassion and competence (power).

I want to wish all my fathers a happy fathers' day. I thank Rev Dr Rockeybell Adatura, a voluble international Christian apologist, who answered most of the troubling questions I had about Christianity. God used his in-depth knowledge about religions to save my soul from wandering and floundering in freethinking.

I want to thank Mr Sampson Afrifa, my father-in-law who sincerely loves me and wishes me well in life. I also thank my supervisor, Prof Jeremy Morris, who is patient with me. I thank Prof Kofi Asare Opoku, a foremost Africanist who is nurturing me to take over from him. I also salute Hon Kojo Yankah, whose university first employed me as a full lecturer to teach Africana Studies. Finally, I thank Rev Dr John B. Ghartey, the former General Secretary of the Assemblies of God Church, Ghana, who introduced me to systematic theology and hermeneutics.