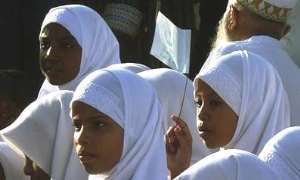 Earlier, I had expressed views on this seeming controversial matter. I wish to deviate from that position as it reflected a man jumping to the conclusion to chastise the lady who became a proverbial grasshopper at a festival of fowls.

First, most of us speaking from a supposed standpoint of Islam say it served her right because that's not what Islam represents. This view is problematic because it's based on the notion that every Muslim considers the pageant as HARAAM or REPREHENSIBLE. To that extent, we see her as having contradicted herself. She wanted them to accept her hijab as a way of expressing her beauty publicly because as a Muslim that's how she sees it.

Meanwhile, all ideas and belief systems, including religion, give us certain labels to identify with, in this case, her hijab. But once we imbibe them, they become our own; and we defend them without necessarily requiring permission from any quarters (to do so); especially, in a society not ruled by Islamic law. Those labels become an inescapable part of our subconscious minds. I think that was what she expressed.

How can Muslims advocate for the right of our women to wear hijab at the workplace, regardless of the fact that some women may not wish to do so, yet think the lady's action is an aberration? Could it be because we don't see GMB as a formal job interview? GMB may not be a formal job; but it's a platform that has provided and continue to provide avenues for young women to help solve problems and build our nation. Based on our various ideas of what constitutes haram, is it not likely that some of the workplaces we advocated to accept hijab may be considered haram by other Muslims?

For instance, some Muslims hold the view that it's haram to work in the alcohol industry. In truth, the reason for the advocacy isn't just based on our desire to freely express our beliefs and manifest the same but we believe, fundamentally, that our Constitution makes sure of that. Of course, it's our duty to advocate for our collective rights as a community. But it's not in our place to 'audit' how each member wants to use that right, for as long as it doesn't infringe on the Constitution. We can't accuse others of failing to tolerate the expression of our beliefs and then turn ourselves into 'vigilantes' to disown others who see its outcomes differently.

While others see pageants as completely reprehensible, some make references to pageants organized elsewhere for hijabis as an example for her, thereby enforcing again the notion that she didn't have to participate in GMB as an odd one. My question is, in those 'perfect' pageants, don't men sit to watch the women? I ask because other Muslims said it was wrong for her to participate in GMB because a hijabi shouldn't parade herself before men to watch! Don't we think that by appearing in her hijab she would have stood out, and given how intelligent she's said to be, she would have drummed home the point that hijab covers the her head and not her brain? What I find even more hypocritical is that a lot of us calling her out spend time and mobilize resources every year to support other Muslim girls in the same contest. Is it because we love the so-called Liberal Muslims than the so-called Hard-liners narratives as promulgated by the media?

I'm even scandalized that in the course of these discussions I saw some people condemning her; and these were people who defended a politician for kneeling before a pastor to receive blessings. There were also people who defended a respected Muslim leader in this country for receiving blessings from a Catholic priest; today, they condemn the hijabi for appearing before judges at GMB, 2020 in her hijabi. Both the Muslim leader and the politician were considered moderate with intents to show unity for a nation by being tolerant Muslims. How about her? Is it because we don't see her as representing us, or we simply think she's too small and lack the cloud? Also, is it only on the altar of pulpits Muslims can demonstrate their desire to be moderate?

GMB is about Ghanaian culture and how to express it as well as represent your values in the best ways you know how without hindrance. And there's no better banner to place religion under than the that of culture to the extent that people's cultures reflects their practice of their religion. Therfore, GMB failed to appreciate her culture, which includes how she expresses her religion; which then includes how she chooses to manifest her faith. Therefore, it was discrimination against her, even if it was borne out of ignorance.

My point about GMB's ignorance takes us to our past, especially, the period before our independence. There were some Northern political stalwarts who advocated for Ghana's independence to be delayed. Their main concern was that there was such an infrastructure gap between the North and South such that it may never be cured in an independent Ghana. They also had other concerns about the cultural domination of the North by the more developed South. These were serious concerns several decades ago as they're today. Looking back, their words were prophetic. And that's, probably, why we're having these conversations about GMB and other platforms not being inclusive.

What is true is that at the founding of our nation, not many Muslims were at the helm. While at the University of Ghana, I saw that all the main halls had chapels but there were no mosques. I'm using the UG example to buttress the point that our history speaks volumes about our current situation as Muslims, and that it wasn't a deliberate action; and also, there were no Muslims at these higher decision making levels to advocate for Muslims. But progress has also been made at UG as hall authorities and students have been able to a identify places in the various halls for Muslim students to worship. Muslim students in other universities, including KNUST, have been able to put up beautiful edifices to facilitate their worship. That's immense progress.

What I wish to add is that change comes from our national leaders, regardless of their faith; they just need to have a vision and armed with an unflinching desire to keep the nation together. Until the 1990s, when President Rawlings took bold steps, Muslims in Ghana celebrated the annual Eid without a day off. At a point in our immediate post-independence period, President Nkrumah passed the Avoidance of Discrimination Law. This law proscribed political parties formed on religious and ethnic lines. I think that has helped to hold the nation together. And that's what I expect organizers of public events to be mindful of. We all must understand that a secular state isn't based on any single religious law or cultural expression. However, interestingly,

it provides the platform for all shades of religion and culture to find expression and to thrive peacefully. This should have been at the heart of any discussion on the matter at hand.

Finally, I wish to say that GMB isn't a religious gathering; that's why it's not organized in churches and mosques. They simply ask Ghanaian women to show-case what makes them beautiful by dint of their culture. Unfortunately, they did so with a prejudiced mindset that since the hijab covers the upper part of the body, including the cleavage and ears, the public wouldn't see it; therefore, there isn't enough witness to her beauty. Consciously or unconsciously, they seek to completely redefine Ghanaian beauty, while excluding our diversity. And here we are, accepting how they've twisted beauty while condemning a lady for challenging it.

And to the imperfect Muslims expecting perfection from an imperfect hijabi, I appreciate your contradiction. In any case, those contestants from the other faiths aren't perfect representatives either. If we judge others on the specifics of what's immoral, while ignoring the larger goals they aim to achieve, we may be hindering their efforts to cause change. This is the first time it has happened. It may not not be the last. The conversation will continue. As to whether organizers will make room for diversity in 2021 or continue on that path of exclusion, only the next pageant would reveal. For me, my wife is a hijabi, and she's beautiful!

From a mosque in Area Two, Sunyani