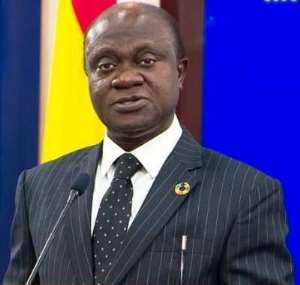 The MP for Wenchi and Minister of State in-charge of Planning, Prof. George Gyan Baffour managed to secure his fifth bid to represent his constituents again on the ticket of the NPP in parliament despite stiff opposition by four other challengers.

It was the first the first time that as many as four persons had contested with the renowned economist since he became the MP for the area in January 2005.

At the end of the day, Prof Gyan Baffour secured 172 votes as against 167 votes by his closest challenger, Albert Ameyaw.

The programmes Manager at the Ministry of Business Development, Kojo Frempong followed with 148 votes while Tina Abrefa Gyan and Yaw Opoku Atuahene lagged behind with 61 and 19 votes respectively.

In Sunyani East, the MP for the area, Kwasi Ameyaw-Cheremeh who is also the Majority Chief Whip also fought hard to retain the NPP ticket to contest the next elections as he overwhelmingly won with 564 votes as against 227 votes by Lawyer Alfred Tuah-Yeboah, a private legal practitioner.

This would be his fourth attempt to be in Ghana’s legislature, having made his debut in the House in January 2009.

The MP for Jaman South, Yaw Afful and his colleague MP for Tain Gabriel Osei also emerged victorious in their respective primaries.

Gabriel Osei, the Tain Legislator retained his bid with 345 votes as against 192 votes by Ababio Alexander, his closest challenger while the other contestant, Alex Ofori who is a lecturer at the Sunyani Technical University garnered some 110 votes.

The story at Berekum East was however different as the incumbent MP for the area and Chairman of the Select Committee on Health, Dr. Kwabena Twum Nuama lost the primaries to Nelson Kyeremeh, 35-year-old native of Biadan near Berekum.

In a fiercely contested elections, Mr. Kyeremeh garnered 286 of the valid votes cast while the incumbent MP secured 232 votes, with the two other contestants, Solomon Kyere Boadu and Paul Ofori-Ampofo going home with ten and two votes respectively.

The incumbent MP for Dormaa East, William Kwasi Sabbi also suffered the same fate as could only bag 153 of the votes as against a hooping 225 by Paul Twum Barima. The other contestant, Dr. Kwabena Sarfo bagged 31 votes.