When youths channel their strength to informal politics 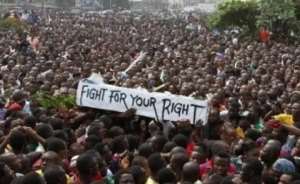 In this report, ODIMEGWU ONWUMEREwrites that youths seem to prefer informal politics to formal politics upon global reformation for their involvement in the later

How to engage youths in democratic politics has become a headache of a sort to social crusaders, political scientists, media practitioners and so many other groups in Nigeria and by extension, international. This question has continued since 1999 the country started to practice democracy after 35yrs the military held sway in the leadership of the country. Since the democratic dispensation, the country has spent billions of Dollars in electoral processes. Likewise, some international unions like the European Union, EU, can swank of supporting and strengthening Nigeria's democracy and electoral processes with not less than 100 million Euros. This, the EU can say, were supported by means of democratic institutions, the electoral processes, legislatures and all electoral stakeholders. Apart from this, the EU was keen to divulge its fresh funding of youths, women and persons with disabilities programmes with 26.5 million Euros.

While the social groups and funding are bent to bring in the youths to take-on in conventional democratic politics, the youths seem dis-interested to take the lead in lieu of their inconsiderable features and involvement in promoting and marketing the political affairs of the old politicians. One such support by the youths to old politicians was the recent summit they held for a 63yr old Governor of Ondo State, Mr. Rotimi Akeredolu (Senior Advocate of Nigeria, SAN). They are supporting his continuity in office ahead of the 2020 gubernatorial election in Ondo state.

Checks added that while the youths came out en masse to declare their support for Akeredolu in what they dubbed ‘Akoko Aketi Youth conference’ which held at Akungba Akoko, they perhaps did not take into cognizance that Akeredolu has been governor since Sunday, November 27 2016, when the Independent National Electoral Commission, INEC, announced him as the winner of the Ondo State Governorship Election. With Prof. Ganiyu Ambali as INEC Returning Officer, Akeredolu garnered 244, 842 votes defeating Eyitayo Jegede of the People's Democratic Party (PDP) who had 150, 380 votes, and Olusola Oke of the Alliance for Democracy (AD) who had 126, 889 votes . Akeredolu was sworn in on February 24 2017 in Akure, the Ondo State Capital, as the governor of Ondo State. Besides, these persons are not youths. And the question of when youths shall handle the mantle, un-equalizes political analysts’ forecast.

This is one of the many stories of youths in the country supporting old politicians instead of championing for how they would be involved in partisan politics and be decision-makers instead of the yes-men or errand boys and girls they have resorted to being.

Examinations confirmed that two persons who led the youths for Akeredolu 2020 and whose names were simply given as Mr L. Fawehinmi and Mr L. Runsewe, were happy that “the conference witnessed a massive turnout.”

It was not that any youths wanted to contest in the gubernatorial election in the state as at the time of filing this report; “the conference witnessed a massive turnout” was for the 63yr old Akeredolu. Whereas the youths should believe in themselves in moving the Ondo state, it is despondently the other way round.

A statement credited to one of the conveners of the summit, read, “The only way good governance and dividends of democracy will be sustainable in Ondo state is the continuity by Arakunrin Oluwarotimi Akeredolu as governor.”

For instance, on May 3, 2018, the European Union (EU) decried the famine of Nigerian youths partaking in partisan politics. At the INEC Continuous Voter Campus Outreach at University of Abuja, the Ambassador and Head of the EU Delegation to Nigeria and ECOWAS, Mr Ketil Karlsen said for democracy to be symbolic, it must embody all the demographic population of a country, and the youths are a chief case in point.

The Executive Director, EU Centre for Electoral Support (ECES), Mr Fabio Bargiacchi was apprehensive that the Nigerian youths represent 60 per cent of the country’s entire population, but wondered what the youths make of their strength, number and intellect in every aspect of Nigeria’s electoral process.

However, there is the Youth2030: The United Nations Youth Strategy, officially launched on Monday, September 24 2018 at a High-Level Event at the United Nations in New York, and was presented by the UN Secretary-General António Guterres. The United Nations also launched what is dubbed "Launching Global Campaign Promoting Right of Young People To Run for Public Office".

The campaign is a global issue, campaigning Not Too Young To Run. It was launched at the first United Nations Forum on Human Rights, Democracy and the Rule of Law that took place at United Nations, Geneva.

According to the UN Secretary-General’s Envoy on Youth, Ahmad Alhendawi, “Young people have every right to be active participants in civic and public life and it is time to ensure they no longer face arbitrary barriers to run for public office – whether at the local, regional or national level. Through the Not Too Young To Run campaign, my office will work with partners around the world to raise awareness about the issue of age discrimination and promote and expand the rights of young people to run for public office.”

It was gathered that the campaign, which was launched by a partnership that consisted of the Office of the UN Secretary-General’s Envoy on Youth, the UN Development Programme (UNDP), the Office of the High Commissioner for Human Rights (OHCHR), the Inter-Parliamentary Union (IPU), the European Youth Forum (EYF) and the Youth Initiative for Advocacy Growth & Advancement (YIAGA), had the objectives to push ahead the sponsorship of young people’s right to run for public office and address the wide-spread question of age intolerance.

Correspondingly, Karlsen added, “But I think we need to ask some questions, that is the reason for this outreach today. Another question to be taken into consideration is to ask what it takes for youths participation in politics; we have to look at funding, political parties and campaigns.’’

Many believe that youths have less responsibilities and more fervor towards the betterment of a given society. But this is not the views of Bargiacchi.

He said, “I also wish to encourage all electoral stakeholders to ensure the full engagement of the youths in political activities in Nigeria because youths must be paramount in political leadership. Credible young people must be given a place to contest in election into offices and the 35 per cent affirmation for gender could also be considered for the youths to protect the fairness of democracy.’’

But there are divergent views which are that policies completing youth can be enacted by the youths instead of old politicians who do not see things through the lens of the youths especially the contemporary issues besetting the youths.

Research has shown that the old politicians have created ugly perceptions surrounding politics of which the youths have embraced the game as a very ‘dirty game.’ Another side is the sit-tight-rule by the old politicians whose allegiance to their political parties was on continuity and not on paving way for younger people who ought to stand a chance to rule if the old people erase authoritarian politics from their different political parties.

These parents do not see politics as a career, because they believe that politics does not always bring in money regularly, except when the aspirant won in an election or is appointed into political office. Conversely, data has it that due to the shrewd habit of the old politicians against the youths, the later have no option rather than being easily manipulated overtly or covertly for thuggery or vandalism in electoral processes. Records however show that the few youths in politics are from political families or have a pedigree with old politicians.

Conclusion: Youths deserve to show their talents in politics

Opinions are that no matter the constraints against youths participation in politics, the democratic landscape in Nigeria needs the talent of youths in politics to burgeon. The youths need to be given access to politics to showcase their talents.

“In countries of dictatorship, the younger generation’s fresh ideas and new leadership can help to overcome authoritarian practices. Protests led by youth leaders can force autocratic leaders to step down from power, allowing these youths to become part of formal decision-making,” said a source that would prefer anonymity.

The EU chief nonetheless recommended that electoral stakeholders in Nigeria have to ensure that the country’s politics was not automatically about the person with principal financial muscle, but the person with the brightest dreams and goals approaching into power. By so doing, politics can be cleaned with the help of youths and old politicians.

Your quest to harmonise our country's religious diversity co...
11 minutes ago