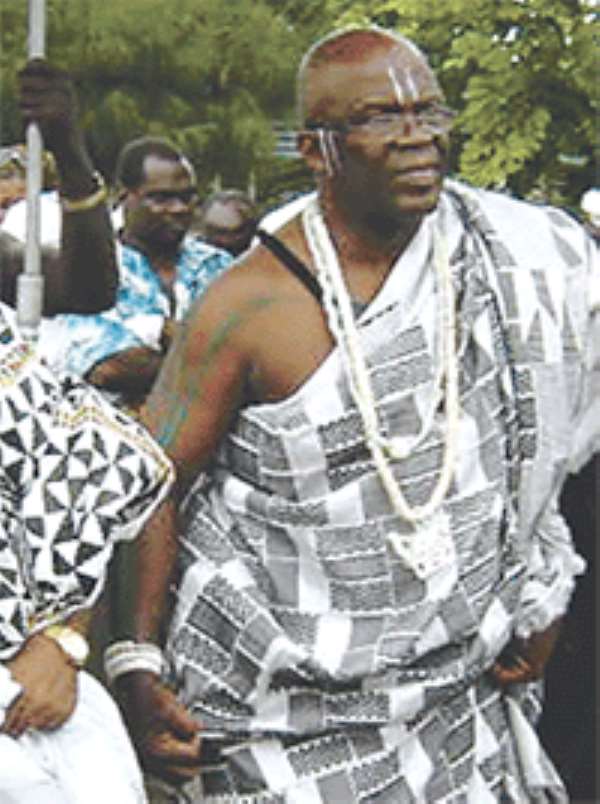 The Ga Traditional Council has accepted Dr Jo Lartey Blankson, a great grandson of King Tackie Tawiah I, as the new Ga Mantse to succeed the late Nii Amugi II.

The ceremony chaired by Nii Kpobi Tete-Tsuru; Acting President of Ga Traditional Council; was witnessed by a crowd, which later followed the new Ga Mantse in a convoy from the Palace to the Ga Traditional Stool House at Ga Mashie.

At Ga Mashie, King Tawiah and elders of Ga Stool amidst drumming, dancing and firing of musketry, gracefully walked a distance of about 200 metres to greet the Gas before he was taken into the Stool House.

King Tawiah thanked the Traditional Council and Ga Chiefs, who were at the ceremony and called for unity, love and peace among Gas.

His coronation would be in October, by which time the late Nii Amugi would have been buried, a member of Teiko Tsuru We Royal House said.

Earlier, a group of people attempted to vandalize vehicles and attack persons suspected to belong to Teiko Tsuru that recently announced the installation of the new Ga Mantse.

When the group, which apparently belonged to a rival faction, saw the GNA vehicle approaching the entrance of the Palace, they rushed to the Reporter and advised him and the driver to leave the scene and never come back because they would not be spared the next time.

In an angry mood they told the GNA that the new Ga Mantse would never be the new overlord of the Gas. They said it was not the turn of the Teiko Tsuru We to install a King.

The Curriculum Vitae of Dr Blankson

Dr Jo Lartey Blankson is the great grandson of King Tackie Tawiah I. His father was Blankson Lartey, son of Princess Ameley Tackie, daughter of the King.

His mother was Mary Lankailey Lartey, a niece of Kotei Scholar and a cousin of the late Nii Nikoi-Olai Amontia IV, the late Asere Mantse.

He has since 2002 been a member of the National Development Planning Commission, and also the Chairman of the Sub-Committee on Private Sector Development from 2002 to date.

From 1987 to date - Consultant, Harris and Dixon Insurance Brokers Limited, London, United Kingdom and was until 1998 an Associate to the Director of Reinsurance. He worked with Alexander Howdens Insurance Brokers, London.

He established the GRO's London contact office in 1980 and served as the Manager and London Representative of the organization from 1981 to 1987.

Between 1982 and 1987 he was the President of the London Contact Offices Association with representative from different parts of Asia, Africa, Latin America and the Middle East. He was engaged as Research Manager of GRO in 1977 and promoted to Senior Manager in 1978.

He was elected Secretary General of the West African Insurance Companies Association (WAICA) in 1978 and re-elected annually for six terms. He was co-Secretary of Committee of Expert that drafted the Code for the Brown Card Automobile Insurance for ECOWAS countries.

Between 1972 and 1976 he was made Senior Adjunct Lecturer in Political Science and Constitutions at the Queens College of the City University of New York and a visiting assistant Prof. at the John Jay College for Criminal Justice, New York in 1975.

Dr Blankson had travelled extensively in Africa, Asia, Europe and the Americas on Insurance interests. He has membership in various organizations for educational and professional interests.

Between 1960 and 1962 he was the special Aide to the Ghana High Commissioner in London before he was transferred to the Ghana Permanent Mission to the United Nation, New York