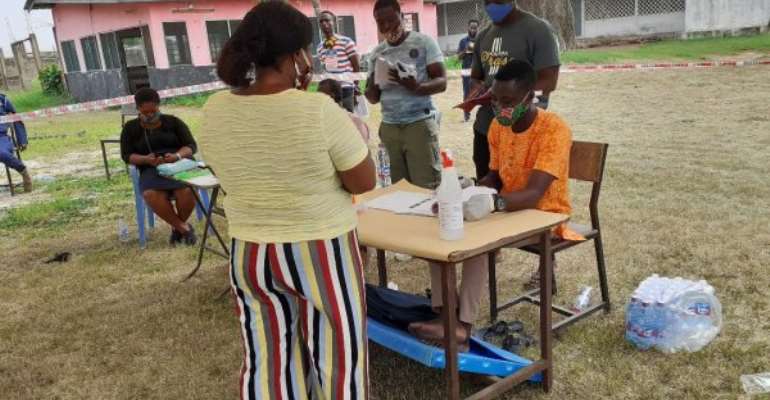 The Krowor Constituency of the New Patriotic Party has commenced Parliamentary primaries in Nungua in the Greater Accra region started peacefully on Saturday.

Some of the polling centres the Ghana News Agency visited revealed that safety protocols were observed as "Veronica" buckets and soaps and sanitizers were placed at vantage positions for delegates to wash and sanitize their hands before voting.

Social distancing protocols were also being adhered to where delegates observe the two-metre distance from each other to cast their votes.

Security personnel were in their numbers to ensure orderliness in the exercise.

Madam Elizabeth Otinkrah, the Presiding Officer, PRESECO Polling Centre at Nkpor said voting started exactly at 0700 hours with a total number of delegates in the centre as 107.

She said as, at 0854, 65 delegates had cast their votes, adding everything was on course without any challenges.

At the Nungua Secondary School, Sookpoti, Mr Osei Kwadwo, the Presiding Officer said the total number of delegates to votes are 71 and as at 0915, 39 delegates had voted.

He said the atmosphere was cool as delegates trickled in gradually to vote.

At the Royal Preparatory School at Klowe Konaa centre, the total number of delegates expected to vote is 66 while 40 delegates had voted as at 0850 hours.

Three Parliamentary aspirants are vying for the slot to represent the party in the December polls.

They are Mrs Elizabeth Afoley Quaye, the incumbent Member of Parliament for the constituency, Mr Eric Aryikwei Okine and Mr Emmanuel Laryea Odai as aspirants.