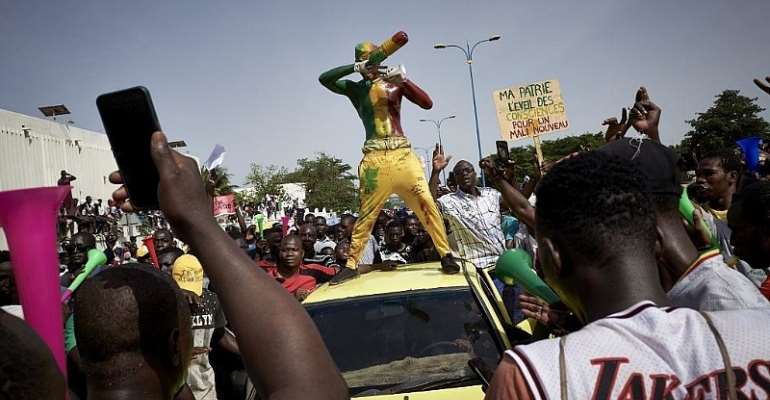 Malian protesters have taken to the streets of the capital Bamako to renew their demands for President Ibrahim Boubacar Keita to resign. Urged by opposition parties and an influential imam critic, they accuse their leader of mishandling the many crises plaguing the Sahel country.

For a second consecutive Friday, large crowds gathered at Independence square in the capital Bamako to call on President Ibrahim Boubacar Keita to step down.

They chanted "IBK, get out", using the acronym by which the president is popularly known, repeating the principal slogan that has rang out in the streets since the beginning of the protests on 5 June.

Demonstrators have responded to the call of the country's newly resurgent opposition, composed of religious leaders and civil society figures under the banner "Movement of 5 June – Rally of Patriotic Forces" or M5-RPF.

Muslim cleric Mahmoud Dicko has risen as their de facto leader and has seen his influence grow amid the social unrest.

"The president has not listened to the people. But this time, he will understand," Dicko had earlier told reporters, vowing that "this Friday's rally will be one of the most important".

Unlike the last rally, the protest movement this time sent a delegation to the president's office to fetch his letter of resignation. They were blocked by security forces and came back empty-handed.

In a statement on Friday evening, the movement warned that "the people will exercise their right to civil disobedience."

“We will be non-violent. But we will fight to the satisfaction of our demand," concluded imam Dicko.

Who is Mahmoud Dicko?

Recognisable by his white hat and Islamic dress, the 66-year-old is a well-known figure in Malian politics.

Originally a close ally of President Ibrahim Boubacar Keita, who appointed him as the head of the High Islamic Council, Dicko's rise in the ranks was aided by his conservative views mixed with a modern approach to Islam. He refuses for instance to impose the sharia law in Mali.

"In the past, he helped the president negotiate with radical Salafist groups," explains Emmanuel Dupuy, president of the Institute for European Perspective and Security Studies in Paris.

"His form of political Islam was an effective tool in countering their narrative," he told RFI.

But after seven years of Keita's leadership, Dicko and his supporters want accountability.

"You have a president who was elected with a programme and it's been a complete failure. There is now insecurity inside Bamako," explains Dupuy, referring to Mali's Islamist insurgency which was initially limited to the north.

"Social problems have not been dealt with nor has corruption," Dupuy says, with the economy stagnating, public services faltering and a widespread perception of bad governance.

March's long-delayed parliamentary poll was meant to be a step towards resolving the crisis, but it ended up mired in allegations of electoral fraud and led to calls from the opposition for parliament to be dissolved.

"Many people are saying, 'How can you run parliament when the main opposition leader is missing?'" Dupuy says, recalling the abduction of Soumaila Cissé days before the election.

After months of silence, Keita announced this week that Cissé was alive.

In recent days, the 75-year-old has also made several concessions, such as raising the salaries of public teachers after a long-running pay dispute. He also pledged to form a new unity government to try and mute criticism.

On Thursday, mediators from the West African regional bloc Ecowas arrived in Bamako to try to find a way out of the crisis, meeting with all of Mali's political actors, including IBK and Dicko.

"President Mahamadou Issoufou has asked us to come to try and mediate, to prevent the crisis from spreading to the sub-region," he told Niger's state radio.

A border attack on a military post in Côte d'Ivoire last week, highlighted that the insecurity threat has already spread beyond Mali and the other G5 countries including Burkina Faso, Niger, Chad and Mauritania.

The attack was a reminder of the daunting task posed to French military, national armies, and one of the UN's largest peacekeeping forces in stemming the violence, despite recent gains and the formation of a major coalition.

The incident has also sharpened opposition to foreign intervention, which Mali's powerful imam Mahmoud Dicko has made his battle cry.

"He has used the withdrawal of French and international troops as a tool to promote a new anti-imperial position," offers Dupuy, a tool that has proved popular among some segments of the Malian population who accuse the president of being too close to France.

But that could now could change, according to Dupuy, who says IBK is not indispensable: "A huge part of the population, various political actors and some in the military are questioning his capacity to be a leader inside and outside the country."

This is a concern for France, which has some 4,000 troops stationed in Mali and other G5 countries as part of its Barkhane operation.

President Emmanuel Macron is due to travel to the Mauritanian capital Nouakchott on 30 June to take stock of the progress made in fighting jihadist groups in the Sahel.

However, for Dupuy, Mali's domestic crisis is unlikely to top his schedule.

"France's focus right now is Burkina Faso, which risks becoming a new Mali," comments Dupuy, pointing to the rising attacks against civilians, which killed 1,500 people in 2019.

"Burkina Faso is experiencing the same problems that Mali went through in 2012: no more state, a gap between the north and south and the risk of power shifting into the wrong hands. That is the priority for France," he said.