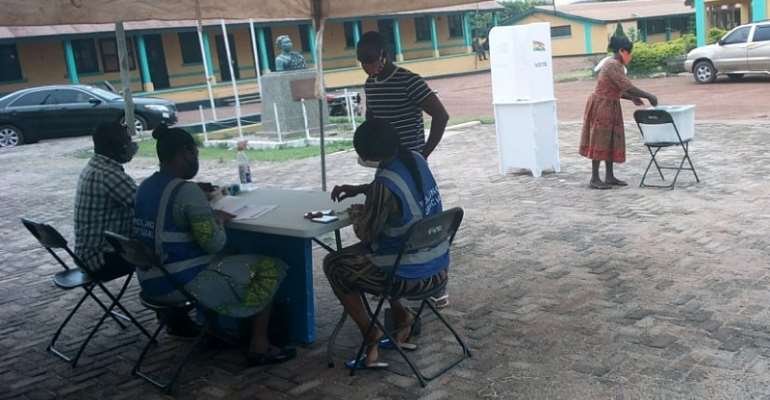 Some irate supporters of the party allegedly assaulted Mr. Musah Damtarrh, the constituency Chairman in the early hours of Saturday.

Mr. Damtarrh and two other party supporters were returning from the Sunyani residency, when the three attackers allegedly assaulted them on their way at gunpoint.

The Ghana News Agency (GNA) learnt the assailants who were wielding other offensive instruments believed Mr. Damtarrh was supporting one of the parliamentary aspirants vying for the primaries, but the timely intervention of bystanders saved the situation.

Confirming the incident to the GNA, Mr. Damtarrh said one Asoma Salia, popularly known as 'Tupac' and Asare Atua who allegedly held pistols, trailed and attacked them [the chairman and his team].

Meanwhile, voting was progressing in many of the polling stations in the Sunyani East constituency during visits by the GNA.

Mr. Alfred Tuah-Yeboah, the Bono, Bono East and Ahafo Regional Chairman of the Ghana Bar Association (GBA) and a former Deputy Brong-Ahafo Regional Secretary of the NPP is challenging Mr. Kwasi Ameyaw-Cheremeh, who has been the Member of Parliament (MP) since January 2009.

Voting however, started earnestly without hitches in most of the polling stations in an atmosphere of peace.

The Electoral Commission (EC) is conducting and supervising the primaries, expected to end by 1300 hours amidst security presence.

Delegates were waiting patiently at the Ebenezer Presbyterian and Wesley Cathedral Methodist basic schools as well as the Sunyani Victoria Park where there were clusters of polling stations.