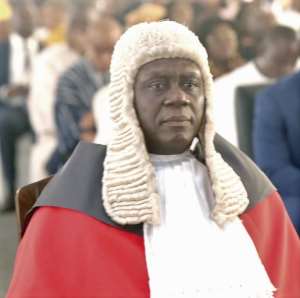 A seven-member panel of the Supreme Court presided over by Chief Justice, Kwesi Anin Yeboah has indefinitely adjourned the ruling of the case in which the National Democratic Congress dragged the Electoral Commission to court over its decision not include the existing voters’ register as a requirement in compiling the new voters’ register.

The judgment was initially scheduled for Tuesday, 23 June but Starr News’ Court correspondent Mutalla Inusah reports that the apex court has now adjourned the judgment indefinitely.

This was after the Supreme Court on Friday heard a similar case and granted the request by the Attorney General to have the two cases consolidated.

The application by one Mark Takyi-Benson against the EC was subsequently consolidated.

The applicant and his lawyers have been asked to file their statement of case by 12:00noon on Monday, June 22.

The court also ordered the AG to file their statement of case also by Tuesday, June 23, 2020.

The parties are to return to court on Wednesday, June 24, for hearing.

The opposition NDC argues that a new voter’s register will deprive many Ghanaians the right to vote in the polls if the existing voters’ ID card is rejected a claim the EC disagrees with.

The party has argued in its suit that the EC lacks the power to go ahead with its plans because it can only “compile a register of voters only once, and thereafter revise it periodically, as may be determined by law”.