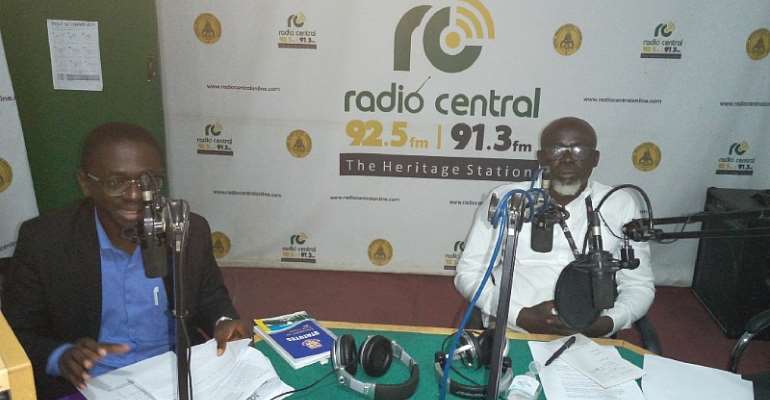 A former University Teachers Association of Ghana (UTAG) President and the current Dean of the Faculty of Arts, University of Cape Coast has admitted that some UTAG-UCC members shot themselves in the foot with the initial wholesale rejection of the Public University Bill. He averred that at the inception of the Bill, he mooted the idea for the consideration of the Bill at a meeting at convocation, "UTAG members rejected the Bill without making any inputs and in fact some members called for my head as an officer". Some of our members allowed politics to take a better part of them". One thing this country must be careful about is our penchant to allow partisan politics into every facet of our national life".

In addition, Prof. Kwarteng said "as academics, we ought not have allowed emotions to take a better part of us but we ought to look at issues dispassionately but unfortunately that didn't happen with this university bill". He continued that, "a colleague at the meeting can easily rise up, move motion for the rejection of the bill and unfortunately you get majority supporting same instead of us looking at the document before concluding" he added.

Further, the Dean of the Faculty of Arts, UCC said everybody has a political party he votes for but when issues come up, he expects that people should address such issues minus their political lenses. "If not for the wholesale rejection of the Bill they wouldn't have been at this level at this time". Expatiating further on why he thinks the wholesale rejection of government policies and programmes isn't good, Prof. Kwarteng who is also a historian, gave two classical examples;

One, when Ghana was at the verge of attaining independence, a conference was organised for all stakeholders but the National Liberation Movement members boycotted the meeting. "The others attended and the outcome of the meeting was implemented, but he added that, if the NLM members had been part of that meeting possibly things would have been different".

Secondly in 1992 when the NPP lost the presidential vote they decided to boycott the parliamentary elections. "What did they benefit, nothing and the NDC had a filled day and run the country". So today we as academics who should know better cannot repeat same mistakes that had been made by some politicians in time past. We have shot ourselves in the foot with that attitude". "We didn't help ourselves". Prof. Kwarteng remarked.

Dr. Boadi-Kusi who is the current UTAG President of UCC and the Immediate Past National Secretary of UTAG also contributing to the discussion said the Public University Bill has come about because government indicated that there were too many laws governing different universities in Ghana with some of them being outdated.

He explained that the bill went through a lot of processes to get to this point but in March of this year, the bill was gazetted, UTAG decided to go through the bill to ensure if their earlier inputs have been captured or not. "One problem UTAG had with the bill was that, it was not practical for government to have a harmonised law to govern all aspects of public universities since they had different mandates and different size and structures” the current UTAG President explained. He added that some aspects of the law could be harmonised for example promotions and conditions of service but not every aspect needed to be harmonised".

Notwithstanding all the disagreements, Dr. Boadi-Kusi said one monumental disagreement UTAG has with the new bill is the University Council. "There are three main principal officers of a University; Chancellor, Pro Chancellor or Council Chair and the Vice Chancellor". All three are officers who are appointed by Council per article 195(3) of the 1992 constitution which states that "The power to appoint persons to hold or act in an office in a body of higher education, research or professional training, shall vest in the council or other governing body of that institution or body". But "along the line and across all regimes, when the time comes for the appointment of these key officers of the University, article 70 which gives the power of appointment to the President is used to appoint the Council Chair and in some cases the Chancellor" he posited. This has been the convention overtime and no one has complained", but we have drawn the attention of the Parliamentary Select Committee on Education to this since it is subject to interpretation of the Constitution.

Dr. Boadi-Kusi continued that, irrespective of all the issues surrounding the bill, "UTAG met the President at the Jubilee House and the President agreed with most of the issues they raised and asked us to liaise with his Minister of education and see what can be done on our proposed amendments". We met the Minister and to a large extent most of our proposals were accepted".

When his attention was drawn to the fact that, the Minister of Education has said that there isn't any substantial difference in current composition of the University Council and the new one, the UTAG President of UCC opined that "to a large extent I can agree with the Minister of Education because when a proper analysis is done on the current composition of the University Council, there are more members coming from outside than internal members". "We need to look at it dispassionately as academics and see the way forward and not jump to conclusions that government wants to take over the University Council". He further explained that the current University Councils have more external members. Example, "University of Ghana has about 22 members but only 7 are internal and even in my own institution, there are more external than internal members but the only problem now is that the numerical strength of our internal members is being reduced." "This is why people think decisions at Council would sway to government side" he asserted. He further explained that they have therefore proposed that at least one senior member representation of Convocation, the alumni and GRASSAG should be brought back on Council and the Minister agreed with that position.

On the way forward regarding how the law would favour both sides, Dr. Boadi-Kusi said, they have tabled their proposals to the Parliamentary Select Committee on Education and expressed the hope that most of the proposals tabled will be factored into the revised bill. "I admit that when we went to parliament to meet the select committee on education, the Minister of Education urged his colleague MP's to pay particular attention to UTAG 's proposals since he the minister was in support of most of them and for us that is very progressive" he emphasised. He indicated that it is not possible to agree on everything but UTAG will continue to dialogue with the relevant stakeholders to ensure that the right things are done.

Dean of the Faculty of Arts Prof. Kwarteng on the other hand added his voice by saying that in every organisation there two kinds of people; "the hawkish and the dovish". "The doves are those who believe in dialogue while the hawks are those who believe things should be done with some kind of force". He concluded that, with his experience as a union leader and with close to twenty years teaching experience, "I believe dialogue helps to resolve issues than through the use of force" Prof. Kwarteng added.

A Broadcast Journalist, Fatherhood Advocate, Writer and Author, Pan Africanist, Counselor, believer in Culture and Family. Ideologically Conservative, very open to progressive issues that enhances the course of fathers and family. Available for Speaking engagements on issues of Fatherhood

Voters’ ID: Nothing Wrong With Registering SHS Students In S...
7 hours ago