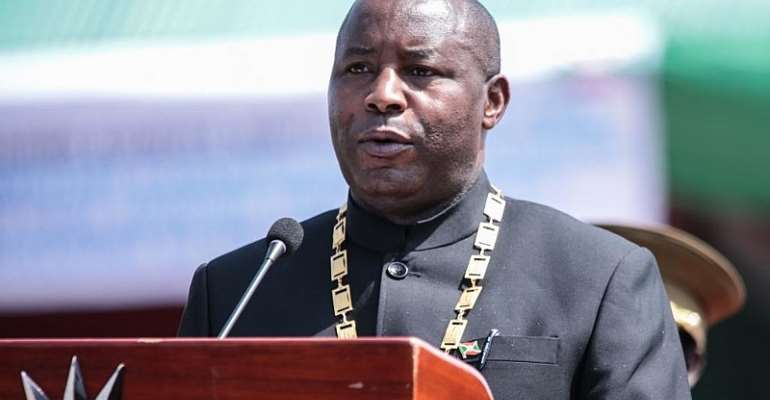 Evariste Ndayishimiye was sworn in Thursday as Burundi's new president following the sudden death of his predecessor Pierre Nkurunziza. He inherits an internationally isolated and fractured nation and faces a tough task of reconciliation.

Dressed in black, Ndayishimiye took the oath of office Thursday in front of a packed stadium in the capital city, Gitega, becoming Burundi's tenth president.

The jubilant mood was tinged with mourning, a week after the sudden death of outgoing leader Pierre Nkurunziza, said to have died from a heart attack.

Ndayishimiye led the crowds in a minute's silence and paid a heartfelt tribute to his predecessor, thanking Burundians for their "serenity" during this difficult time.

The 52-year-old was not meant to take the reins of the country until August but the Constitutional Court decided to speed up his inauguration to avoid a power vacuum.

Mood for change
Handpicked by the ruling CNDD-FDD party to succeed Nkurunziza, the retired army general was elected in May, in a vote disputed by the opposition.

While Ndayishimiye's critics have denounced an electoral fraud, many Burundians hope the change of power will lead to real change, especially in the economy.

According to the World Bank, three out of four Burundians live below the poverty line and one tenth of the 11 million population are on the brink of famine, warns the Food and Agriculture Organization.

To fix the economy, "he must put an end to corruption which plagues the CNDD-FDD system," observers told RFI's Africa service.

The ruling party has grown increasingly isolated on the world stage since the last election in 2015 when Pierre Nkurunziza decided to run for a third term, sparking months of protests.

The economy tanked and donors cut aid. More than 1,000 Burundians were killed in clashes with security forces and over 400,000 fled abroad.

Policies
Today, the new government wants refugees to return as it looks to forge national reconciliation.

"We do not want there to be a single Burundian living abroad as a refugee," Ndayishimiye insisted. "We want them to come back."

The new leader also promised change but in continuity.

"We are not going to build a new Burundi, rather we are going to use the foundation that was built by the Champion of Patriotism, President Pierre Nkurunziza," he told the public.

Among his new policies, include plans to offer free health care and increase pensions to allow retirees to earn the same amount as they did before retirement.

The policies are strikingly similar to the health and education reforms rolled out by Nkurunziza during his first term and that Ndayishimiye now wants to emulate.

Covid-19
There is one small difference however, and that is the new leader's handling of the Covid-19 pandemic.

If his predecessor ignored the virus and kicked out experts from the World Health Organization, Ndayishimiye seems unwilling to take any chances, amid rumours Nkurunziza succumbed to Covid-19.

The public was asked to arrive early Thursday for the swearing-in ceremony to allow time for coronavirus measures such as temperature checks and people were seen washing their hands with sanitizer.

Officially, Burundi has registered only a hundred positive Covid-19 cases and one death, but some doctors warn of "hidden cases," including several fatalities at health centres and in peoples' homes.

The pandemic, as well as the economy are just some of the host of challenges Ndayishimiye will have to face during the next seven years of his term.