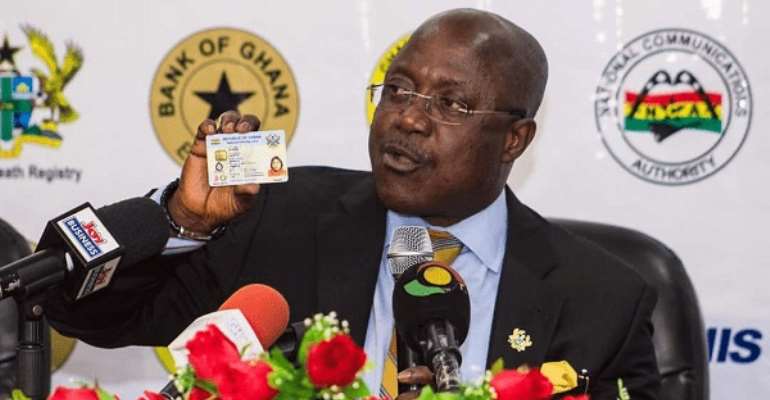 The National Identification Authority (NIA) says it will begin a nationwide mop-up exercise today after registering 11,063,259 Ghanaian adults across the nation in its initial mass registration exercise.

The Executive Secretary of NIA, Professor Ken Agyemang Attafuah, who made this known in Accra yesterday at a press conference, said the nationwide mop-up exercise had become necessary to enable eligible Ghanaian adults who could not get the opportunity to register during the first mass registration exercise to do so, adding that 16.7 million Ghanaian adults had been projected to be registered at the end of the whole registration exercise.

Besides, Prof. Attafuah announced that the mass registration in the Eastern Region, which was the last of the 16 regions to be covered by the authority but was truncated in March this year as a result of the Covid-19 pandemic, would start today alongside the nationwide mop-up exercise.

According to the Executive Secretary, the mass registration and the mop-up exercises in the Eastern Region would run concurrently in all the 33 municipalities and districts of the region and continue till June 27, 2020 between the time of 7am and 5pm.

He said the nationwide mop-up exercise would, however, begin in the Upper East and Upper West regions from today to July 3, 2020, followed by the Central, Western and Western North regions from July 4 to July 23 and then the Northern, North East and Savannah regions would follow on July 10 and end on July 24.

Continuing, the Executive Secretary said the Volta and Oti regions' mop-up exercise would begin on July 30 and end on August 8, while that of the Ashanti Region which also begins on July 30 will end on August 13.

He said the mop-up exercise in the Greater Accra Region would also start on August 16 and close on August 29, while those of the Bono, Bono East and Ahafo regions would start on August 20 and end on September 4.

He explained that as result of the lifting of the restrictions, the NIA would strictly abide by the Covid-19 safety protocols announced by the President, stressing that all eligible Ghanaians who would turn out at the various centres to register would have to wear face/nose masks otherwise they would not be registered.

He said all NIA officials who would be engaging in the exercise would also wear masks, while Veronica buckets and soaps would be provided for Ghanaians visiting the centres to wash their hands and apply sanitizer before being attended to.

He said contrary to popular misconception that the National Identity System is just about issuance of identity cards, the NIS includes citizenship recognition, data integration, harmonization of identification system, as well as storage of data and exchange system for all Ghanaians living in Ghana or abroad.

“There are up to 14 applets on the Ghana Card, one of which is a Common Payment Application. There are three International ID profiles that allow citizens to verify identities internationally and to access digital platforms to undertake electronic transactions,” he said, stressing that the technical system is a world class and at par with the best practices in the world.

He said it was very imperative for every qualified Ghanaian to register and have the Ghana Card because without it one cannot apply for a Ghanaian passport, drivers' licence, to register for land title, to vote in national elections, buy a SIM card, pay taxes or do transactions relating to pensions and with the National Health Insurance Scheme since the National Identity Register Regulations (L.I. 2111) passed in 2012 makes the Ghana Card the only identity card to be required and produced in transactions where identity must be established or proved.

He said the Ghana Card is renewable every 10 years at a fee to be determined by the NIA, but the registration is free of charge.

He warned that any foreigner who would attempt to register during this mop-up exercise would be arrested and prosecuted according to laws of the land.