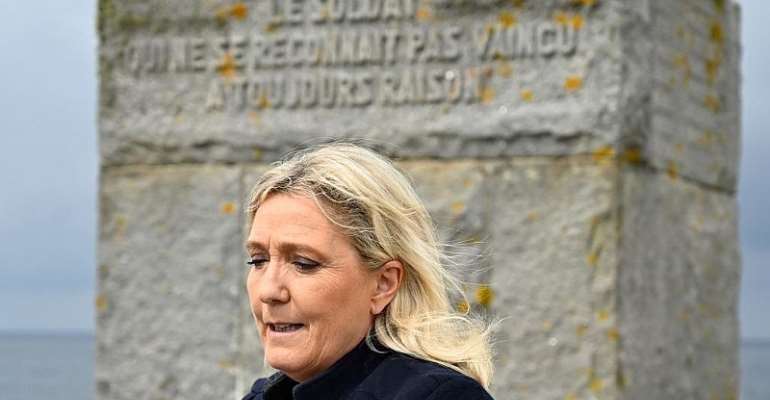 The leader of France's far-right National Rally (RN) party, Marine Le Pen says she may take legal action against local police on Sein Island in Brittany. She accuses them of preventing her from participating in a commemoration ceremony marking the 80 years since Charles de Gaulle made his 18 June 1940 'appeal' – calling on his compatriots to resist German occupation.

Le Pen labelled the Finistère police prefect's decision to modify the time of Thursday's ceremony to prevent her participating, as a "serious breach of the constitution" and "abuse of power".

In the face of the change in schedule, Le Pen made a short trip to Ile-de-Sein on Wednesday, a day before the official ceremony, in order to pay homage to soldiers who answered Charles de Gaulle's call to fight on behalf of  Free France (France Libre) in the second world war.

"The police chief has acted in a partisan manner," she told France Bleu local news after her return, accusing officers of organising "a rebellion" against the visit and "considering us with disdain."

Visit seen as a provocation
She added that she intends to inform the Prime Minister of her disgust over the matter.

"I'm considering legal action. This is a first in the history of the fifth Republic; the prefect advanced the ceremony by one hour to prevent one of the nation's deputies from being present." she said.

Many residents of the small island felt that her visit was a provocation and turned their backs to her, as can be seen in a post from independent journalist who witnessed the scene.

Around 50 protesters turned up at Le Pen's hotel to denounce her arrival.

France Bleu local news reported that Le Pen visited the monument to France's free navy in the afternoon, where she read a short speech before returning to the mainland.

She was booed when she left the island and the bouquet of flowers she left was trampled on and removed.

141 of the island's men were among the first to go to Britain following the Appeal in 1940, but only 32 came home.

Earlier, the mayor of the island Didier Fouquet had told the press that he didn't want Le Pen "interfering" with the official ceremony.

"They're taking the ceremony away from us," he told AFP agency, adding that Le Pen was trying "to recuperate images and symbols".

"This is yet another attempt by Marine Le Pen to get people talking about her," he said.

Grand-daughter of a Breton sailor
General de Gaulle was detested by the far right National Front (FN), as it was known then, founded in 1972 by Marine's father Jean-Marie Le Pen. It was made up of Nazi sympathizers and pro-French colonialists in Algeria.

Over the years, Marine Le Pen has sought to soften the image of the party, and has attempted to distance herself from the various controversies involving her father.

"I wished for a peaceful and serene commemoration. I did that today. I paid homage calmly," she told journalists, defending her actions on Wednesday.

"I don't know how commemorating the 18 June could be seen be any French person as a provocation."

"Particularly coming from the grand-daughter of a Breton sailor who died for France in 1942 and whose name is inscribed on the monument of a town in Brittany," she said.

As for the official local ceremony, it took place on Thursday morning, as planned without Marine Le Pen.