What About Our Own " I -Can't-Breathe " Moments In Africa?

...From Voice of reason
By Kwaku Adu-Gyamfi
Feature Article 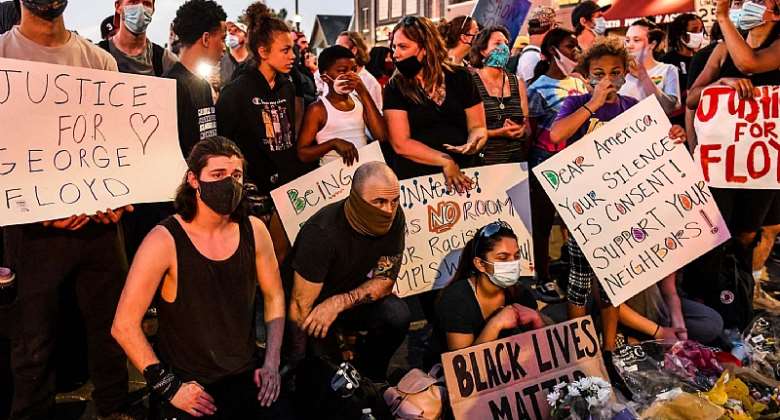 Why are we bent out of shape about the development in the U.S?

TAKE OFF YOUR KNEES from our necks, we can't breathe!

Yes, we can't- breathe when the 'system' in Africa has put a choke-hold on us like the police officer charged with alleged manslaughter of George Floyd, what a sad death! And being suffocated by our own leaders ,we feel marginalized.

Protesters have raged in the U.S for several weeks now ,sparked by the May 25th death of George Floyd, a black man who was killed while in police custody, as well as the recent killings of other blacks by the police.

And, watching the inhumane and mind-boggling video of the slaughtering of George Floyd in the middle of a street in Minneapolis was a vomit-inducing experience so was watching the pictures of hundreds of African's sons and daughters getting drown in the Mediterranean sea for no fault of their own.

Indeed, denigrating of black people(Africa's descendants ) has been going on for centuries, but this time the public's appetite for change is overwhelming than many elites had realized. It wasn't about the 'victims' per se ,but the people had it on their chins .

Nevertheless, as an African I can't be an armchair quarterbacking about the development in the United states of America. However, I'm not bent out of shape about it like the rest of my contemporaries on this side of the Atlantic ocean.

It's emotionally and spiritually exhausting and mentally draining to debate this issue(of negative image about black people) that Africans have helped to perpetuate. Sometimes, I want to shout my barbaric yawp from the rooftop.

Time and time again, I have become accustomed to having to defend my own stand on institutionalized racism against black people everywhere; not as something I subscribe to ,but something that I think the continent of Africa has perpetuated by its actions and inactions.

No, I'm not excusing the systematic racism we experience in the western world, Arab countries and China, but does it take that long to see our role in it? It's indeed, a slap in the face.

This is what is giving me sleepless nights over the entire development unfolding in the U.S :Why should Africans in general and Ghanaians in particular be bent out of shape about the racism , inhumane treatment and injustices perpetuated against the blacks ?

For one thing, have you noticed that kids from privileged households and backgrounds tend to have preferential treatments everywhere they go? The same thing can be said about race. When all they see coming from Africa are starvation, famine and war torn neighborhoods on CNN ,what do you expect them to feel and think about us and the descendants of Africa? Our problem is not just the skin tone ,but our households' (home front issues) images give off negative vibes and that is the main cause of our problem.

Yes, it may seem absurd to argue that in the time of pandemic, economic catastrophe and demand for racial justice, the make-up of Africa should preoccupy us .

Look. Africa has zero,zilch,nada, none respect in the international quarters and that has affected the way others relate to us . And, anyone who claims otherwise is engaging in the sort of myth-making.

For several decades, the lousy policies of our governments upon governments on this side of the Atlantic ocean have perpetuated a 'system' that has put a permanent chock-hold on our necks which is suffocating us very profoundly; by preventing us to be creative and ingenious.

That has not only affected our potential to see the socioeconomic promised land ,but our desire to live, work and die peacefully on our motherland. As if that is not enough, it has also turned a lot of Africa's sons and daughters into globetrotters; meandering through life aimlessly; and in the process pushes us across the high sea in search for greener pastures. If that is not inhumane and atrocious then nothing else is heartbreaking.

Unfortunately ,there are no cameras to record the negative serious effects of the 'systematic ' literally kneeling on our necks .With our zillion tons ( all sort )of natural resources at our disposal, why do we always panhandle for loans to fill our budgets' faucet ?

It's indeed, a mystery why the people living in the warmest parts of the earth are often the worst off ,economically and politically. You will think that not having to expend money for energy or resources to stay warm would be an advantage, but that doesn't seem to be so. Africa is the warmest continent, but it has many of least successful societies on earth.

If it isn't shit crazy then what-the- hell is it? Warm weather should give people in Africa a head -start on prosperity ,but not so. I wonder why!

The fact of the matter is that when it comes to the effects of racism ,certainly there is enough blame to go around; when bemoaning how we got to where we're as people .

There are three major problems that have put our progress in a chock-hold indefinitely. It's believed that any country that depends solely on natural resources as a source of revenue can never make it in the new world order. Why?

Fact: We have not created any viable and sustainable economy for ourselves that is not independent of natural resources. In other words, every revenue we generate is linked directly or partially to natural resources. And, that is not the best way to survive in this dog-eat- dog world. This kind of arrangement works against our progress because it always allows someone else, who lives thousands of miles away from us---in an Ivory towers--- to determine the prices of our natural resources.

Fact: The African human capital is not adequate to produce any considerable economic megawatt dividend because some of our education degrees have no value at all, in our situation. And those with relevant education may sometimes feel that many kinds of work are beneath them. In that case ,even engineers may prefer the desk to standing in the mud in hip boots at a construction site.

The employment market place has little value for our unemployed graduates that would be commensurate with their expectation, therefore the governments have created swollen artificial bureaucracies to hire them ,in order to neutralize their potential for political dissatisfaction, civil unrest or insurrection .

In turn, these bureaucracies and the voluminous and time-consuming red tape they generate can become obstacles to others who do have the skills and entrepreneurship drive, needed to contribute to our economic advancement.

Fact: As if all the above mentioned deficiencies are not enough to bring any economy on its knees over a period of time, now 'religious economy 'is being thrown into the twist---to complicate things-- with very deadly repercussions on our lives, future, progress and distorted image.

We've been looking the other way about this new religious economy ,whiles people's lives are being thrown down the drain .We're wasting a lot of resources , quality hours and labor on this religious dome in the hope of redeeming the wounded souls, while in fact we're digging our own graves economically. Some people even fake illness just to get a chance from work to attend all- night vigil in one-man churches. And ,that is t-r-o-u-b-l-e!

My point is : George Floyd death has brought racism and sexism and other 'isms' into open. What we're witnessing in America and around the world is an accelerated shift in thinking. His death has touched a nerve and evoked a long history of racism, but how long is it going to last and what do we make of it in relation to our own mess and self-inflicted wounds?

Just as the corona virus thought us that we must learn to deal with serious issues at our home-front by ourselves, without waiting for "manna" from the big guys, it's a wake-up call we may well have to grapple with and take personal responsibility for our development.

It's also a teachable moment, giving the fact that even the pandemic couldn't stop people from protesting against the injustices and inhumane system ; when they have it on the chin for too long.

Racism against blacks will go away as soon as we find our own bearing and equilibrium on this continent and able to give its sons and daughters the needed nutrients and socioeconomic ecology to allow them to breathe freely and comfortably without any hindrances.

That means the culture of silence on our own "can't -breathe" moments need to stop so as to find permanent solutions to our emerging problems .How many more lives need to be sacrificed on the altar of racism and sexism to show us the writings on the wall?

Would the concerns of the protesters(especially whites folks) against racism dissipate once the threat of the pandemic has passed? I pose the question because the effects of racism have never been the interest of the western world and thus never registered on the world's seismography, until now---I wonder why!

Now is the time. I sincerely believe this is the time for Africa and its leaderships to get their acts and ass together and make Africa a fountain of hope and work on its battered image for the sake of its offspring and descendants globally.

I hope that is not too much to ask from our leaders and stakeholders.

Stay tuned and be informed.

*The author is social commentator and a diehard citizen ,not a spectator.

Retract, apologise for accusing me of impersonating Adwoa Sa...
46 minutes ago

W/R: Our school has become a sleeping place for madmen, big ...
55 minutes ago