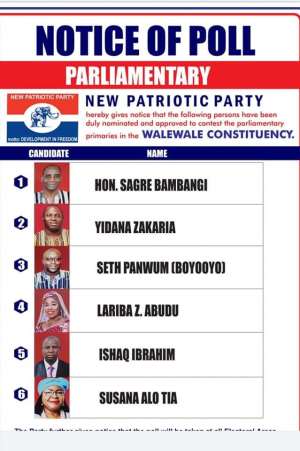 Bawumia Youth Centre (BYC), a youth group in Walewale has called on all the New Patriotic Party (NPP) parliamentary aspirants in the constituency who would be contesting in the upcoming parliamentary primaries to conduct themselves to ensure a peaceful contest in the interest of the party.

It has also cautioned supporters of the various aspirants to desist from petty allegations and politics of insults, especially on social media as such utterances could cause disaffection and affect the fortunes of the party.

“The party is bigger than any of us and winning all the six seats and especially the Walewale seat for NPP is Paramount and worthwhile” it stated.

A statement signed by President of BYC, Mr. James Bukass ahead of the primaries on Saturday said BYC is ready to work with any candidate who emerges victorious in the primaries.

Six persons are slugging it out to represent the constituency in the upcoming elections. They are Dr Sagre Bambangi, incumbent Member of Parliament (MP), Hajia Lariba Zuwera Abudu, a Deputy Chief Executive Officer of the Northern Development Authority, Dr. Susana Alo Aga, a development communications specialist and Board Member of the Ghana Free Zones Authority, Mr. Seth Panwum, a presidential staffer and two-term Presiding Officer for the West Mamprusi Municipal Assembly and Mr. Issahaku Ibrahim, a UK-based legal practitioner.

A PRESS RELEASE FROM THE OFFICE OF BAWUMIA YOUTH CENTER ON THE UPCOMING PARLIAMENTARY PRIMARIES.*

Good morning to the executives present, the members of BYC , invited people and our friends from the media.

It is an honour to have you here this morning in our office.

Bawumia youth center is the most vibrant youth group in the North East Region, it has been in existence for over a decade now. Our activities as a youth group in the last two elections in seeing the party into power were worth emulating, we helped in carrying out the campaign message of the NPP through our door to door campaign in the various communities across the constituency. As a youth group, we work in collaboration with the regional and constituency executives,and more especially the youth organizers .

Ladies and gentlemen present, as a concerned and neutral youth group in this crucial upcoming primaries, we want to state emphatically that we do not support any of the aspirants as a group. we have confidence in all the six( 6) aspirants and we believe that all of them are competent enough to retain the seat after emerging victorious on June 20th for our dear party NPP.

Nonetheless, We want to use this opportunity to plead with all the aspiring candidates to go into this keen contest with a very peaceful message and conduct among themselves to the delegates and again, we will like to caution supporters of aspirants to desist from petty allegations and politics of insults more especially on social media. The party is bigger than any of us and winning all the six seats and especially the walewale seat for NPP is Paramount and worthwhile.

In conclusion, "A United minority is always stronger than a divided majority", so fellow Patriots let's go into this contest with unity, peace and harmony among ourselves, we wish all the aspirants the best of luck may the Almighty Allah guide and protect them. BYC is ready to work with any candidate who emerges victorious in the primaries. Our appreciation goes to the regional and the constituency executives, members of BYC and our friends from the Media,we thank you for coming and may God bless you all....

NDC Dominates Here, If Your Problems Are Not Being Solved, I...
2 hours ago