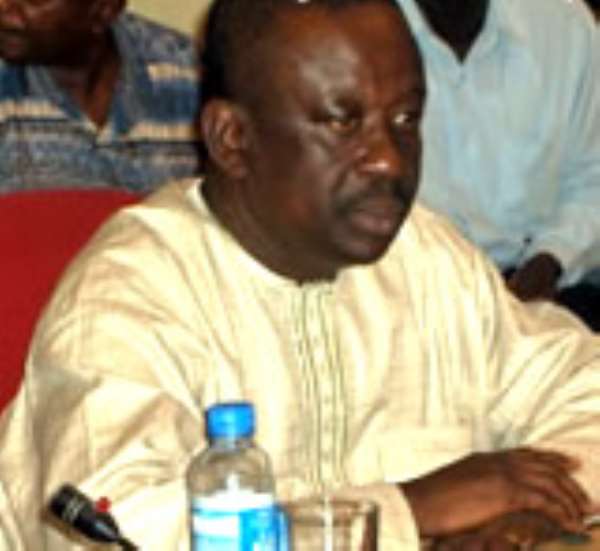 The Minister of the Interior, Mr Albert Kan-Dapaah, has set up a five-member committee to investigate the whereabouts of 77 parcels of cocaine, each weighing 30 kilogrammes, from the vessel which was intercepted on April 27, 2006.

The committee is also to investigate the various allegations leveled against some police officers with respect to the seizure of a quantity of narcotic drugs in East Legon in November last year.

A statement signed by the minister named the members of the committee as Supreme Court judge, Mrs Georgina Woode, the Deputy Director of the Bureau of National Investigations (BNI), Mr Kwaku Duah, a lawyer, Ms Jemima Mograbi, the President of the Ghana Journalists Association (GJA), Mr Ransford Tetteh, and a Member of Parliament, Mr Abraham Ossei Aidoo.

The committee, which has one month to complete its work, will be inaugurated today. It recalled that on April 27, 2006, the Narcotics Control Board, acting on intelligence information, intercepted a vessel with the assistance of the Ghana Navy.

Officials of the board, it said, conducted a search on the vessel and discovered a leather bag containing 30 slabs of a whitish substance suspected to be cocaine.

“This was seized and taken to the headquarters of the board for safekeeping,” it said.

The statement said intelligence information, , however, indicated that originally there were about 78 parcels in the vessel, with each parcel containing 30 kilogrammes of cocaine.

“This suggests that 77 parcels of cocaine, each weighing 30 kilogrammes, were taken out of the vessel just before it was intercepted,” it stated.

The statement said the terms of reference of the committee would, therefore, include finding out the person or persons who brought the parcels on board the vessel in the first instance, determine the actual number of narcotic drug parcels on the vessel immediately before it was intercepted.

They will also determine whether some of the parcels on board the vessel were removed from the vessel before it was intercepted and, if so, to establish when and how that happened at and recommend appropriate punishment.

It said the committee would also determine the whereabouts of the parcels of narcotic drugs, if any, which were removed from the vessel and to investigate any other issues relating to the loss of the narcotic drugs and make recommendations on how to avoid them in future.

In an interview to explain the formation of the committee, in view of an earlier one comprising mostly security personnel, Mr Kan-Dapaah said the work of the five-member committee was different from the three-member committee set up earlier by the ministry to investigate the loss of five kilogrammes of the 30-kilogramme cocaine seized by NACOB officials.

He said the report of the three-member committee, which was chaired Mr J. K. Mensah of the National Security Secretariat, had been submitted to the Attorney-General's Department for advice.

The other members of the committee were Mr Patrick Ampewuah, the Deputy Director General of the Criminal Investigations Department (CID) and Alhaji Adam Malik of the BNI, member-secretary.

According to him, it was in that vein that the five-member committee had been tasked to investigate the allegations leveled against some police officers with respect to the seizure of narcotic drugs in East Legon.

He said those allegations had been published in the media in the last few weeks and it was important that they were investigated.