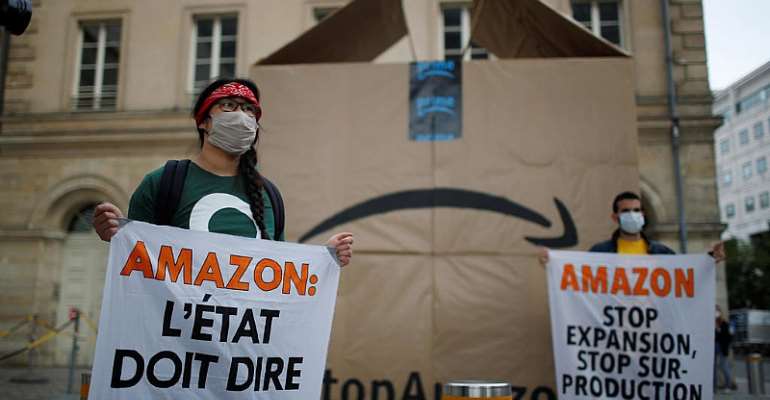 Several dozen groups of environmental activists blocked factories and sites of future Amazon warehouses across France on Wednesday in protests of what they called environmentally and socially harmful economic practices after the Covid epidemic.

The demonstrations followed a call circulating on social media in recent weeks of more than a hundred activist groups to stop the “re-intoxification of the world” after the coronavirus epidemic.

“We have just seen for the first time in our lives what would be possible if the infernal machine finally stopped,” read an English version of the call, in reference to the coronavirus lockdown that brought down carbon emissions, eased air pollution and saw wildlife return spaces of human activity.

“Our rulers are still determined to go back as soon as possible to everything that poisons this world and our lives.”

The several dozens of protests across the country included about 40 activists and Yellow Vest protesters blocking a Lafarge cement plant at Saint-Barthélémy-d'Anjoy near Angers.

“The construction industry is the most polluting after the energy industry,” the group Youth for Climate Angers wrote on Twitter, saying the action was meant “to alter the population about the ecological catastrophe represented by the sector”.

In Toulouse, about 50 members of the group ANV-Cop21 chained themselves to gates of another Lafarge plant, reported a journalist with regional newspaper La Dépêche du Midi.

In Marseille, about 30 people from the Extinction Rebellion group and several Yellow Vest protesters blocked a tanker from delivering sulphur to a factory owned by Cerexagri, an Indian company producing pesticides and other agrochemicals.

In Paris, activists delivered an enormous package in front of the Ministry of the Economy “to denounce the social and environmental impact of Amazon”, tweeted alternative globalisation campaigner Attac.

The group also held protests near sites of future giant Amazon warehouses, including in Alsace in the east and at the Pont-du-Gard monument in southern France.

Attac says the firm destroys twice as many jobs as it creates, avoids paying taxes on 57 percent of its revenue in France via tax havens and contributes to global warming by mass importation and delivery of consumer products by air.