Ken Agyapong Is A Liberator Of The People; Epoch Tree In Politics — Hon. Boniface 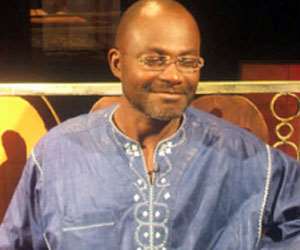 According to Alhaji Abubakar Saddique Boniface, the vociferous NPP member is a liberator who has the ordinary person at heart.

He explained that the when NPP went into opposition after ex-president John Agyekum Kufour lost power to late President John Evans Atta -Mills and everybody was scared of standing up to the then governing National Democratic Congress (NDC), it took the likes of Kennedy Agyapong to march up to the NDC by offering his radio station as the sole mouthpiece for the opposition activities.

"When people were afraid to speak, he used this radio station to elevate the NPP’s views of national interest," he explained.

The MP who is also the Minister of State at the Office of the Vice President Dr. Mahamadu Bawumia gave this description of the loud-mouth MP on his sixtieth birthday celebrations speaking on the Accra-based Oman FM’s evening sports personality programme.

According to him, the Assin Central MP is a gem in politics who always speak for the ordinary man irrespective of their party colours.

In politics, Mr Agyapong is considered as one of the fortnight MPs when it comes to saying it as it is.

"In Parliament, he cuts across both the main opposition NDC and the governing NPP members of the House with his forthrightness on issues of national interest," he intimated.

He further added that you cannot judge Mr. Agyapong by just his facial expressions because, if you do, you will be misled, which is the kind of person Mr. Agyapong is.

According to him, Mr. Agyapong by nature is an Epoch Tree in politics and outside politics.

Speaking on the developments of Madina, he said: "when I first came to the Constituency, the Constituency had nothing, today we can boast of projects ranging from astroturf, green parks, drainage, roads, schools among others thereby consolidating the Mission Madina, I promised the good people of the Constituency."

He continued, "As MP I think about the society and I don't do what will benefit a few people from my party adding that this one of the propaganda tools of the NDC going into the next elections."

According to him, propaganda goes everywhere but the difficulty is that is it does not land.