Some of Our Chiefs Are Ridiculous, Indeed! 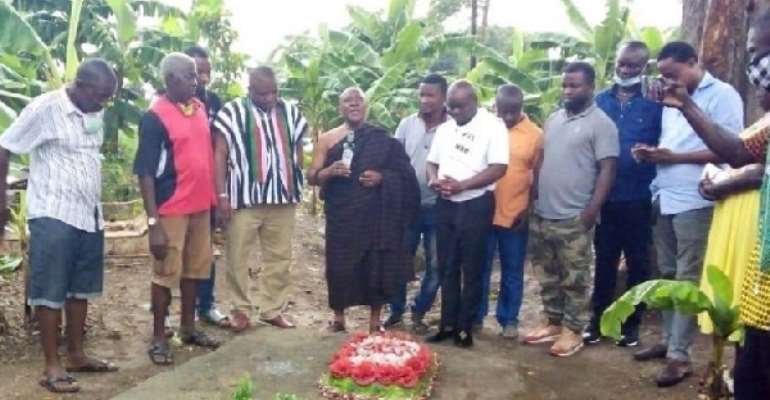 Chief Prays for Mahama at Cemetery

I don’t know what Mr. John Boadu, the General-Secretary of the ruling New Patriotic Party (NPP), had to say about the present breed of our chiefs and other traditional rulers that provoked the ire of some of these chiefs, including the Omanhene, or Paramount King, of Dormaa Ahenkro, in the new Akufo-Addo-created Bono Region. Still, however negative the import of Mr. Boadu’s aspersions or verbal abuse may be deemed to have been, it cannot be gainsaid that the native of Assin, in the Central Region, likely had in mind the Chief of the Township of Breman, near Kumasi, in the Asante Region.

The Chief of Breman is reported to have led the Parliamentary Candidate for that locality from the country’s main opposition political party, the National Democratic Congress (NDC), that is, the Suame Constituency, to a cemetery to do libation aimed at ensuring the 2020 general election victory of both the aforesaid candidate, namely, Mr. Francis Dodovi, and that of the Presidential Candidate of the National Democratic Congress, to wit, Mr. John Dramani Mahama (See “Chief Prays for Mahama at Cemetery” DailyGuideNetwork.com / Ghanaweb.com 6/15/20).

Now, several things are worth noting here in order for the Dear Reader to fully recognize and appreciate what is grossly amiss here. For starters, the action of Baffuor Kotei Kutin Sraman, the Chief of Asante-Breman, inexcusably desecrates the hallowed memory of the deceased and the sacred grounds on which the remains of the latter are interred. You see, among the Akan, the dead have transcended life here on Earth and are commonly believed to be resting in peace, in the bosom of Asaase Yaa, the Earth-Godness-Mother, and therefore are well beyond the petty and mundane and morally corrupt cares and affairs of humans in the world of the living.

Of course, the names of the deceased could have been mentioned or invoked in any libation by Nana Sraman in a victory prayer for the aforementioned National Democratic Congress’ politicians; what makes matters dangerously different here is the pouring of such libation in the cemetery, that unmistakably amounted to necromancy, a patent act of sacrilege in the context of postcolonial Ghanaian political culture. Secondly, the virulently politically partisan manner in which Baffuor Kotei Kutin Sraman conducted himself is what needs to raise the hackles or eyebrows of all progressive-minded Ghanaian citizens and be roundly condemned in toto, because such patent act of necromancy, or the existential disturbance of the dead, also clearly violates the constitutional edict governing the strict Separation between Religion and the State, or Religion and Politics in the country.

At another time in the history of our beloved nation, a prompt call would have gone out for the immediate abdication or, defaulting in the latter, the immediate destoolment of Baffuor Kotei Kutin Sraman. For not only is the Chief of Breman obligated by the very Oath of (His) Enstoolment and Allegiance to the people to conduct himself well above political partisanship, Baffuor Sraman is equally bound by the Oath of His Office to comport himself as a statesman, around whose personality all of his citizens and subjects may be able to rally without any qualms vis-à-vis the fact of his even-mindedness. We must also promptly and significantly add that Asante-Breman is also where most of the past Asante Ahenfo or Asanteman Henenom are buried. It is the Asante Royal Mausoleum, one of the holiest grounds or places of Asanteman.

Baffuor Kotei Kutin Sraman has reportedly claimed that the Ghanaian leader who is on record to have created the greatest level or magnitude of illiteracy in the postcolonial era, is also responsible for the creation of more development projects in the Asante Region than any other postcolonial Ghanaian leader. On the latter count, of course, Nana Breman is definitely entitled to his own opinion. Suffice it, however, to observe, at least in passing, that this writer is intimately familiar with this institutional establishment because not only is he a grandson of the Asantehene by way of Akyem-Asiakwa and Asante-Barekese, where Sikagua Kofi, the globally renowned Golden Stool, was once kept in custody; even more significant, he is also the bona fide heir of the much older Baanmu Division of Okyeman or Akyem-Abuakwa, Akyem-Nkronso, to be precise.

This author’s Akyem-Nkronso Royal Family Members are the traditional custodians of the Okyeman Royal Mausoleum of Banso-Koransan, The Grove of No Return as well as all the lands and forest reserves of Akyem-Abuakwa. Now, the crime that Baffuor Sraman stands incontrovertibly guilty of is the inescapable declaration of war against both the political establishment of the ruling New Patriotic Party and Mr. Osei Kyei Mensah-Bonsu, the Minister for Parliamentary Affairs and the Parliamentary Majority Leader who also doubles as the substantive Member of Parliament for the Asante-Suame Constituency. Now, it is also quite curious that the Chief of Breman would implicitly impugn the political integrity of the very Mr. Mensah-Bonsu, who was not very long ago lavishly honored by The Asantehene, His Majesty, Otumfuo Osei-Tutu, II, for ranking among the most progressive leaders of the globally renowned Asante Federation. I had by own doubts at the time but, of course, the prerogative of decorating Mr. Mensah-Bonsu exclusively belonged to The Otumfuo.

It could also not be more curious for Baffuor Kotei Kutin Sraman to be doing libation in, of all places, the holiest shrine of Asanteman for the political success of the man who not long ago told the international community that Otumfuo Osei-Tutu, II, had absolutely no credibility and did not deserve to have his pronouncements and observations on postcolonial Ghanaian politics taken seriously.