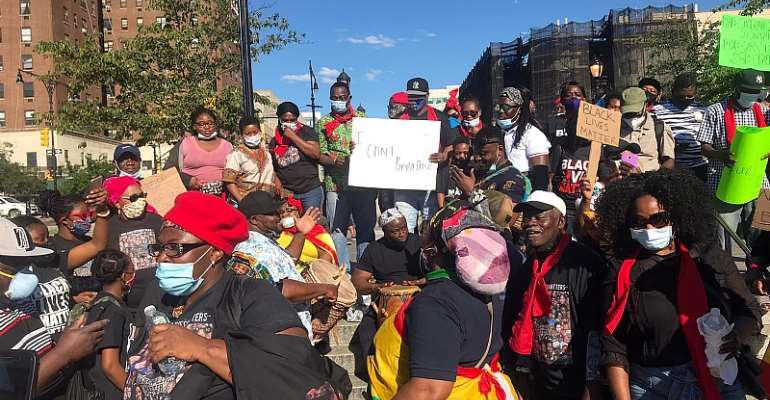 Some Ghanaians and other African Nationals in the United States of America on Sunday, embarked on a match to protest draconian treatment meted out to black Americans.

Following the tragic death of George Floyd in Minneapolis in the United States, there had been numerous marches across the world to show disapproval of such cruel behaviours against black lives.

The peaceful march organised by the National Ghana Parade Council & Gadangme Council of NY started with drumming and dancing by Zeek drummers right from I81 street to 161 on Grand Concourse in Bronx, New York.

Other organizations like Soul brothers, Liberia association, African Women Alliance of America, GP Steppers and other individuals made up of over 200 participants, joined the march, under the escort of the police officers.

At the end of the match, all organizations leaders gave a solidarity speech about the importance of standing with other African American brothers and sisters in the fight for justice.

According to Organizer & President of National Ghana Parade Council - Catherine Cudjoe aka Keymama, there is no other time than now to demand a reform in the way police officers handle an arrest.

In a message to Africans in Diaspora, Catherine Cudjoe, who was also the coordinator for the march, said, Ghanaians/Africans must unite and fight for a good cause,

"Get involved in civic engagements and other activities. We the indigenous African migrated abroad must continue to pave the way like our ancestors who were enslaved lay down their lives for us to enjoy today. The only way we can make a change is when we join the conversation," Catherine Cudjoe added