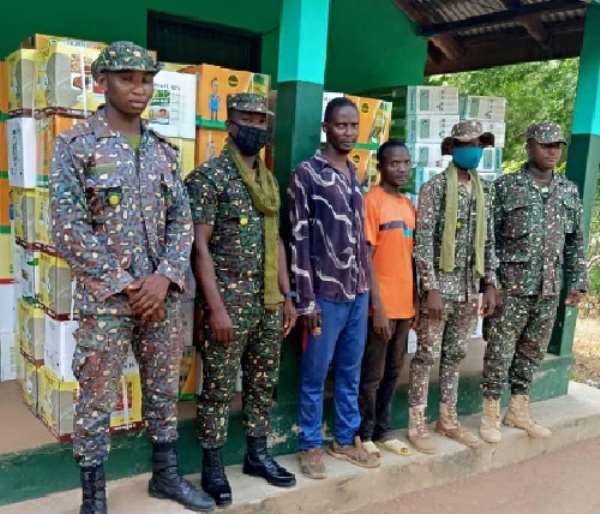 The Ghana Immigration Service (GIS) on June 16 intercepted a number of agricultural and musical items at Saboba in the Northern Region.

The items were being smuggled in a vehicle to neighbouring country, Togo.

The officers of the Ghana Immigration Service, upon intelligence swiftly moved in to apprehend the suspects, when the items were being offloaded at the riverbank at Boagban, a suburb of Saboba and handed them over to the police for further investigation.

The items include, nabsack machines, weedicides and some musical items.

Meanwhile, the driver of the vehicle and his mate has been arrested and detained at the Saboba police station.

Last year Saboba was one of the districts that were banned from selling fertilizers due to an increase in smuggled fertilizer in the area.

The Saboba District Chief Executive, George Bingrini told journalists that the Agric ministry this year decided to approve seven dealers to supply fertilizer to the district for the farmers to use in the farming season.

According to him, a security taskforce was formed to monitor the activities of the accredited suppliers to ensure that no fertilizer is smuggled outside the district.

“In one of their rounds , the immigration officers intercepted the vehicle carrying nabsack machines, weedicides a tossing into Togo.”

He assured that the district security council will ensure that they tackle smuggling in the area.

“We don't want even a piece of our fertilizer to across to any neighboring country this year and beyond, ” he said.

I'm sorry, was running away from a prophecy that I'll be sho...
9 minutes ago