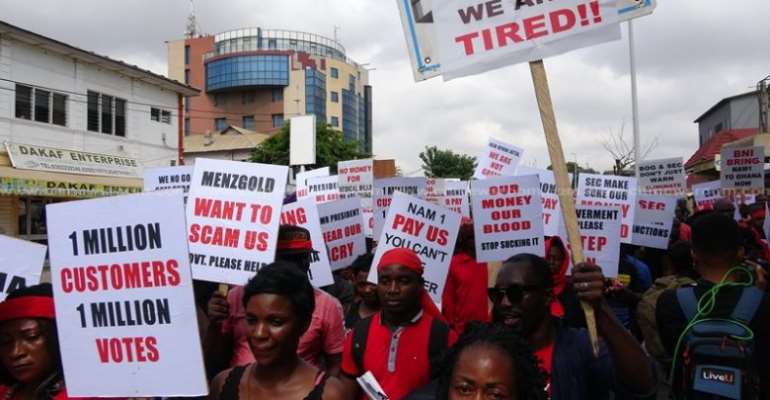 Good morning ladies and Gentlemen of the Press

We want to thank you so much for responding to our call even on short notice....

Our attention has been drawn to the weekend signing ceremony of new Arts , Tiisha by Mr Nana Appiah Mensah (Nam1) aslo CEO of defunct Menzgold Company Ghana Limited. At the said ceremony, Mr Ofei, the corporate Affairs Manager of Menzgold, Stone Bwoyy and other artistes and in the company of some landguards and national security operatives and uniformed police were spotted as providing security for him. This signing ceremony which was organised with grandeur, pump and pageantry and in the full glare of our state authorities occurred whilst victims of Menzgold continue to record deaths among them with current figure not less than 55 deaths among Menzgold Customers. Is it not surprising that Nam1, the father of Menzgold, Brew Marketing Consult, Payboy , ivex minerals , Metallica Refinery and SG Gold has got enough money to sign on Arts and to spare and go on a free for all spending whilst Victims of Menzgold customers continue to die, suffer stroke and heart attacks to death and have their lives shattered by investing in Menzgold?

We are very much appalled by the bravado and open disregard for the laws of the ĺand seeing Nam 1 a man who has been slapped with 61 criminal charges including money laundering still signing financial contract and being escorted by macho men. If indeed our laws are working and which we do believe, then we call on His . Excellency the

President to order the National security to cause the arrest of Nam1 immediately without delay.

Claims of payment of GHC 9.6 million by Nam1

The above claim by Nam1 is not only false but its also criminal. Here is a company whose accounts and assets including his trassaco residence according to official report by EOCO via a court order have been frozen, so where did Nam1 get get money to pay Ghc 9.6 million and how was the payment done?

Remember , amongst his criminal charges is a charge of money laundering. We are challenging Nam 1 to publish the names of those paid indicating amount paid with dates. He is at it again , throwing dust into the eyes of unsuspecting public. Report indicate his new scheme Payboy which was noted to be another scam has succeeded in scaming hundreds of customers who failed to heed advice from leadership of CACM. Today those people he scammed at payboy are nashing their teeth. Thanks to EOCO who arrested Payboy a couple of weeks ago and the Tarkwa high court for throwing the frivolous suit against CACM away.

The Dubai money of $39 million

In 2019 when Nam 1 arrived in Ghana from his hideout, he told the world that he has won a court case in Dubai of not less than $39 million from Horizon Royal in Dubai. He asked the government to help him retrieve the money so that he can pay customers. He further wrote to the Attorney General for assistance. We have been informed by our sources that the money has been received in Ghana recently by Nam1, when confirmed, that money belongs to customers and should be paid to us . We want to know is it that money he is using to sign on new Arts?

EOCO seizure of 400 kilos of Gold from Menzgold, Private Jet and other Assets seized

For the second time in our presser , we want to know the where about of the 400 kg gold that Menzgold told leadership of customers in a meeting that it is in custody of EOCO?

Again, the private jet was at the Kotoka Airport, we want to know the where about of the jet as at the present?

We want to know the whereabouts of many assets seized by EOCO and police CID, these included landed and movable properties, etc.

Menzgold management told customers that some state officials, including party bigwigs and chiefs , borrowed money and or were supported with Menzgold money and we want to know if such monies have been paid

Sack SEC and its boss negligence

We note the haphazard and the selective manner in which Menzgold was shut down. The security and industy Act 2016 (Act 929 section 123, a2) mandated SEC to have written to Menzgold to pay our money before shutting down the company but this was not done and hence 55 victims have died already

From september 2018 that SEC shut down MG , it was until January 2019 after a demonstration by CACM that the governent went for court order to freeze assets of Menzgold and Nam1.

For his decision and the manner in which his actions have led to the deaths of 55 victims, we call on His Excellency the President to sack the SEC boss, Rev Daniel Ogbaami Tetteh immediately. For His professional negligence and bankruptcy are dangerous to the society and customers in the capital markets. The lack of respect for ACT' 929 , section 123 a(2) and total silence on menzgold customers even though SEC , BoG had also done a research in which they promised to protect our investment before the shut down clearly shows that the SEC boss has no respect for human lives and economic investment of the Ghanaian hence the call for his dismissal by His Excellency the President President.

The events above clearly show that menzgold customers who are now victims of bad government actions through state agencies like SEC , EOCO etc coupled with government policy decision to pay customers of other collapsed local banks make us as come to a firm conclusion that our locked up investment should be charged on consolidated fund and pay us without delay. Menzgold customers plight should be treated as an emergency national security issue to avert more deaths among the customers. We note the government to a political decision to pay the customers of collapsed banks and other fund management. We request that the same decision should be taken to pay us since Menzgold was also collapsed by government

Equally upset was the sight of Stone Bwoyy and other artistes with nam1 who performed at that night of signing new Arts, some of these Artistes were signed onto.Zylofon with Menzgold money and when the collaspe came they all run away. We see their patronage over the weekend as heartless and vampires.

On his Asempa program , Ekosisen some 2 weeks ago, Mr Ken Agyapong made some disparaging remarks against Menzgold customers which we find quiet unfortunate and for the second time running , Mr Agyapong appears to be on an agenda to cause more harm than good to already bruised victims of Menzgold

It is quiet unfortunate he called Menzgold Customers greedy and used f" word on us. We dont blame him but we blame our thumbs and the ballot box with limited options to choose from during elections. One wonders if the Hon MP who is seen to be more richer than the government of Ghana actually collects salary, per diems and sitting allowance for the work he does in Parliament? If he does, then to the Menzgold customers , he is also guilty of greediness!

Again, for the first time Hon. MP admits Menzgold was licenced by minerals commission. So after all the misinformation that Menzgold was not licensed was incorrect.

1. Where is the $20 million of Nam1 in the Stan Chart account as he once told the World about on Adom TV?

2. Is that money still in the account as he claimed he was aware?

3. If the money is still there when is he going to tell the government so that it could be used to pay us?

5. On which date(s) were the money withdrawn?

7.which people received the withdrawn money?

1. Government should Pay customers locked up investment from the consolidated fund immediately to amenehiliate our suffering just as is being done for customers of collapsed banks and fund management

3. confiscate properly and genuinely all assets of Nam1 and Menzgold,including landed, and movable assets, private Jets: sell them for the state.