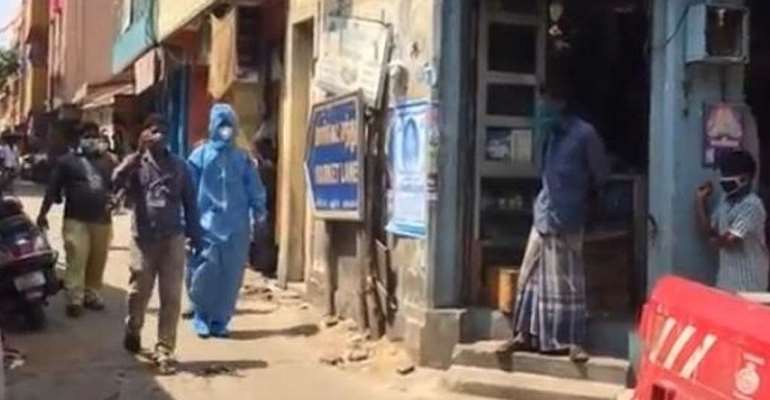 With coronavirus cases rising sharply in India, not only has the country's public health system been overburdened with COVID-19 patients but bodies in mortuaries, especially the big cities, are piling up.

The deluge of bodies in hospital mortuaries has forced staff at cemeteries and crematoriums to struggle to keep up with the mounting death toll.

Hindu cremations which are an elaborate ritual that includes chanting of sacred Vedic hymns and sprinkling holy water from the Ganges River are being given a go-by. Hindus believe the ceremony releases the soul from the cycle of rebirth.

Instead just a group of select relatives watch the wooden pyre burn.

Similarly, Islamic burials which require the body to be washed followed by a prayer have also been forfeited.

“There is no way we can allow proper rituals o happen in the current circumstances. The body count is increasing and the summer weather is intolerable,” Raj Gupta, a civil contractor told RFI.

More than 1,200 have died from the virus in the Indian capital though unofficial estimates indicate that there have been hundred more victims in the city.

In Delhi, the rising number of bodies arriving from hospitals has forced staff manning the cremation sites to extend its opening hours and look for other alternate places.

Authorities have ordered victims be incinerated in modern furnaces as a precaution against infection as anxiety grows over the spread of the disease.

“Not only are hospitals struggling to keep up, but so too are the crematoriums and morgues,” Pradyot Lal, a doctor from a leading hospital told RFI.

The rising death counts in Mumbai have also become a matter of serious concern. A photo of several dead bodies lying in a corridor of the King Edward Memorial Hospital in Mumbai created a massive online outrage.

Meanwhile, all electric crematoria are functioning at double capacity as queues continue outside cemeteries.

With an increase of 10,667 cases and 380 deaths in the past 24 hours, the Covid-19 count in India has reached 343,091 on Tuesday. The spike in cases is lower than the 11,502 registered a day earlier and has also stayed below the 11 thousand mark it had been crossing for the past two days in a row.

Authorities in Delhi estimate that it could need 80,000 beds by the end of July, and warned hotels and wedding venues that they are likely to be turned into hospitals.

Hospitals in five states – Maharashtra, Tamil Nadu, Delhi, Gujarat and Uttar Pradesh – will face an acute shortage of intensive care units and ventilators in the next m