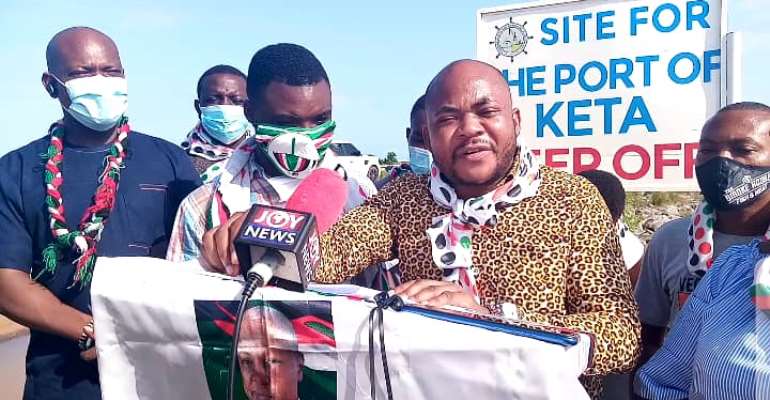 The youth wing wing of the National Democratic Congress in the Volta region has called on residents in the region to disregard government’s narratives about the construction of the Keta Sea Port and Harbour.

Addressing a press conference at the project site in Keta on Saturday, June 13, the Regional Youth Organizer, Mathias Alagbo stated that government has been dishonest, full of innuendos and has failed in keeping a promise they made in the run-up to the 2016 general elections.

He said, “our quest to come here with the media stems from the recent posturing and statements of the NPP government and its agents which seek to suggests that some significant work on the Keta Sea Port has been done, which is painfully not the case.”

“in the run-up to the 2016 general elections, then opposition leader and the flag bearer of the NPP, Nana Addo Dankwa Akuffo-Addo and the NPP party promised the good people of the Anlo land that his government, when voted into power will construct a Sea Port in Keta; many are those who bought into this manifesto promise which eventually saw the NPP win power.”

Mr. Alagbo stated that government has since failed in fulfilling that promise.

“It’s instructive to note that three and half years down the lane, nothing concrete has been done to actualize the construction of the Sea Port. It’s evident that after some agitations from the youth of the area, government cunningly came to erect a sign post on the proposed site for the project, where we stand to deliver this press statement,” he stated.

The NDC says the appointment of a director for the yet to be built Keta Sea Port and Harbour is nothing but a reckless move by government to siphon money from the pockets of the state.

“To the shock and dismay of many, government in March 2019 went further to appoint a Director General for the non-existent port the person of Dr. Alexander Adusei with sake status and privileges as Directors of Port at Tema and Takoradi, which includes monthly pay, two cars, free fuel, official accommodation, car maintenance allowance, free medical care and other entitlements,” he revealed.

Mr. Alagbo thus called on residents in the region, especially the youth to rise up and vote out what he calls a ‘deceptive, clueless government’ come December 7, 2020.