Reflections Of An Ordinary African Woman: Why Ghana Will Never Work

By Sanaaheneba The Ideas Woman 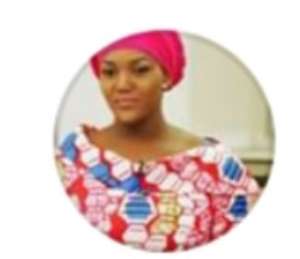 Exhale, here we go again… another blog about Ghana. And this blog is inspired by a long Facebook thread I was involved in. In the said thread, the original poster was lamenting about the fact that women in Ghana are overlooked when it comes to guest speakers on panels. A male contributor suggested that women should organize their own talks. I agreed with him. And that is when the problem started. A young woman, Felicity, one of Ghana’s new breed of feminists replied to me that what did I do after my resignation from my government appointment? She asked why I didn’t form a shadow organization instead of resigning. We went back and forth, forth and back and sadly, the issue of females on talk panels got lost until I said, hey, let’s focus on the issues. 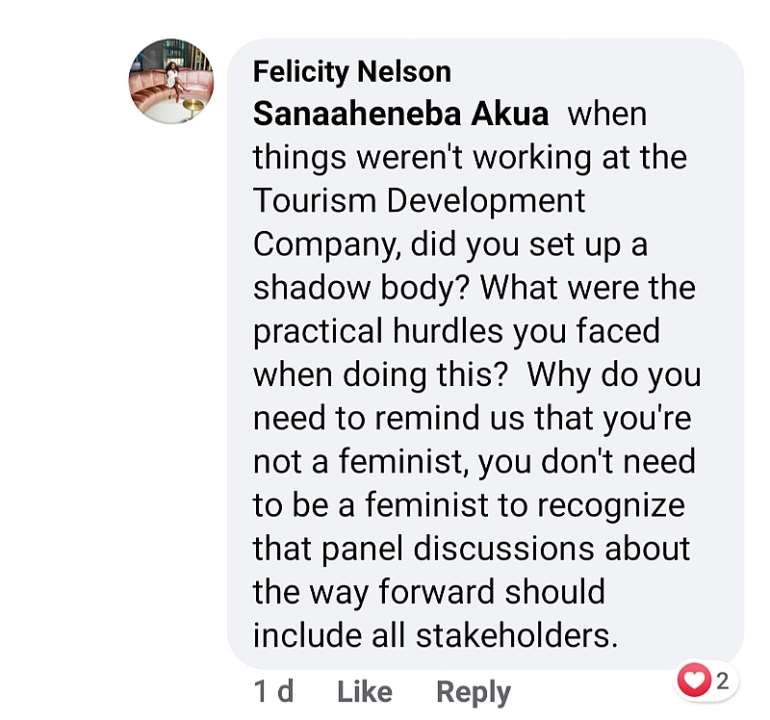 You see the problem with Ghana? And why I say things will never workout?

First of all, we are not allowed to talk about the many challenges and problems faced by Ghanaians. If you do, you will be branded an enemy of the ruling government. So if you talk about corruption under an NDC government, that means you hate the NDC and are a staunch NPP. If you speak about the same corruption under NPP, it means you hate NPP and have been paid by NDC to make them look bad! How does a country develop when speaking about developmental issues leads to you being branded anti one party and pro the other?

The other reason I say Ghana will not work is because some Ghanaians like to shoot down ideas without offering an alternative. Ghanaians will shoot down what may or may not be a valid idea simply because they do not like the person who proposed it! Or Ghanaians will shoot down an idea because they are not thinkers and the idea that somebody thinks frightens them I guess. I call myself THE IDEAS WOMAN because I generate an idea a second. Ask my former colleagues at Lintas or anyone who has worked with me. That’s my strength. I think all the time and can generate idea after idea, effortlessly. Now, I’m not saying all my ideas are good or feasible. But one of my pet peeves is people shooting down anyone’s idea without offering an alternative. Like the young feminist did in the thread that inspired this post. You see, instead of going on the personal and asking me as to why I didn’t form a shadow cabinet, why didn’t the young woman just say “I don’t think the idea of women doing it for themselves will work. I think we should do A, B, C”. That is how we dialogue and find answers. But attacking people personally with comments such as “when things weren’t working at the Tourism Development Company, did you set up a shadow body?” and “why did you need to remind us you’re not a feminist” shows the conversation no longer becomes issue based. What is wrong in saying I am not a feminist but I support women getting on the panel. Why should this statement be a big problem for this young woman? If someone says “I am a vegetarian, but I think fish should be allowed at this dinner” is that a bad thing? No. The person is merely giving you some background information about themselves. So if I say I’m not a feminist, I’m giving background information before proceeding with what I have to say. The personal attacks when discussing issues have to stop.

You see, some Ghanaians are full of so much hate and pull him/her down that they refuse to engage certain people on the issues. Some Ghanaians are full of envy and dislike someone so much that they relish the opportunity to insult them, rather than focus on the issue. I have spent far too much time with haters, fighting over my own views and suggestions. Does that even make sense? I’m only using this example of what happened in the female guest speaker thread because it is the most recent and it inspired this blog. I am not necessarily saying Felicity insulted me in this instance. However, if she had not started her comment by going into my personal space, we would not have spent time going back and forth. All she had to do was say I don’t agree with the suggestion and offer her idea. What she offered was “you proposed an impractical solution and I wanted to demonstrate the impractical by using your personal situation as an example. Proposing that women create their own panels is not the solution. Women should be included in all nation building discussions. We can’t create another Senior Ministry and we shouldn’t have to.” Yes, we all agree on that. That has been the cry all this time so Felicity’s reply to my suggestion is hardly groundbreaking. Yet her friends and supporters will love and like her comments as if she has made a profound statement or offered workable solutions! Some will even go on to say ignore me! I thought the reason for the discussion was to find solutions as to HOW to get women on these panels. I didn’t know the conversation was merely to regurgitate the same old cry! Hitting me with such a response is hardly the solution, is it? Felicity only came to knock down my ideas as “impractical” without offering another HOW idea. Saying women must be involved and we can’t create another Senior Ministry is not a HOW to find answers! 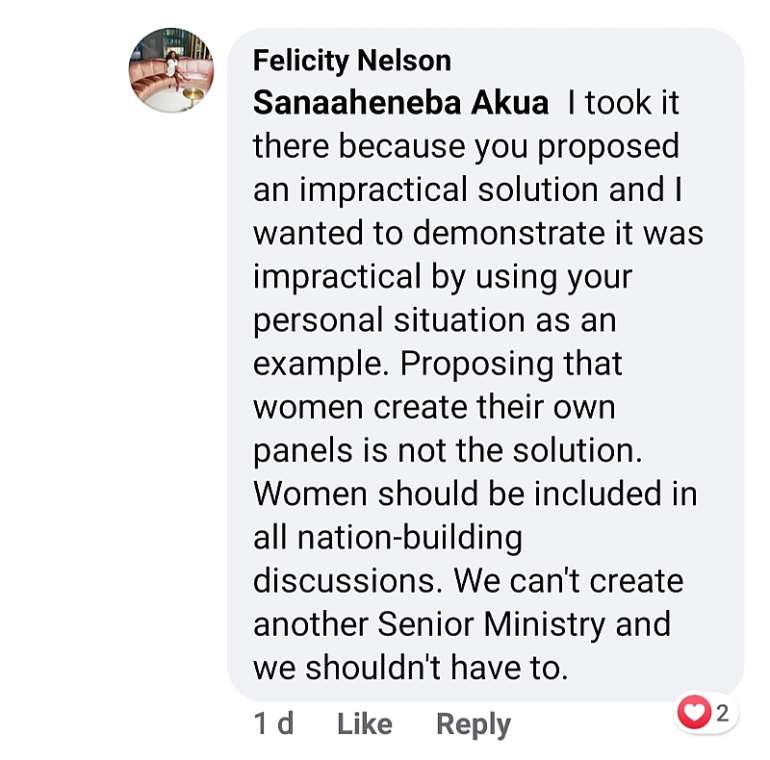 According to https://dictionary.cambridge.org/dictionary/english/impractical , impractical means “not effective or reasonable, or (of people) not able to provide effective or simple solutions.” Now, with that definition in mind, let’s look at the ideas I generated whilst going back and forth with Felicity. Remember, these weren’t ideas I had given much thought to. They simply came to me during our argument so yes, maybe it can be refined if we are to give it a proper thought.

1. A talk panel to discuss HOW women can become involved. The theme is ‘The Importance / Power of the Female Voice in Panels, A Practical Guide’. There would be three speakers – Speaker 1 would talk about the importance and power of the female voice on panels; Speaker 2 would talk about HOW to get women on panels (Ideally Felicity should handle this topic because she is extremely vocal and passionate about this issue. It would be beneficial if Felicity were to give a talk on HOW to involve women where she shares several practical and do-able ideas. We are past saying women must be involved. We must share ideas and suggestions on HOW women are to be involved. And remember,women doing our own panels has been shot down as nonsense and not do-able so no need for any Speaker to come with that stupid suggestion). Speaker 3 would come with an impressive profile of about 30 Ghanaian women who can contribute in all areas of national development.

2. A quarterly panel organized by women in Ghanaian media where they invite women from all fields as guest speakers.

With the idea of women doing it for themselves, I believe what will happen is, whoever organizes panels for women only will have a database of solid and suitably qualified women from all fields. This database can then be made available to event organizers who currently claim the women are not there. Because the women are there. Ghana has the qualified women who can make a meaningful contribution. Now, if the men are not inviting to you to their panels, how long must you cry? Why can’t you think of another way to gain entry? My idea may not work, but before you shoot it down, bring another option and don’t get into personal attacks or insults! Stick to the issue at hand. And anyone who believes this idea is “impractical” needs to ask themselves why they think so and if they would still feel the same if someone else generated the idea… 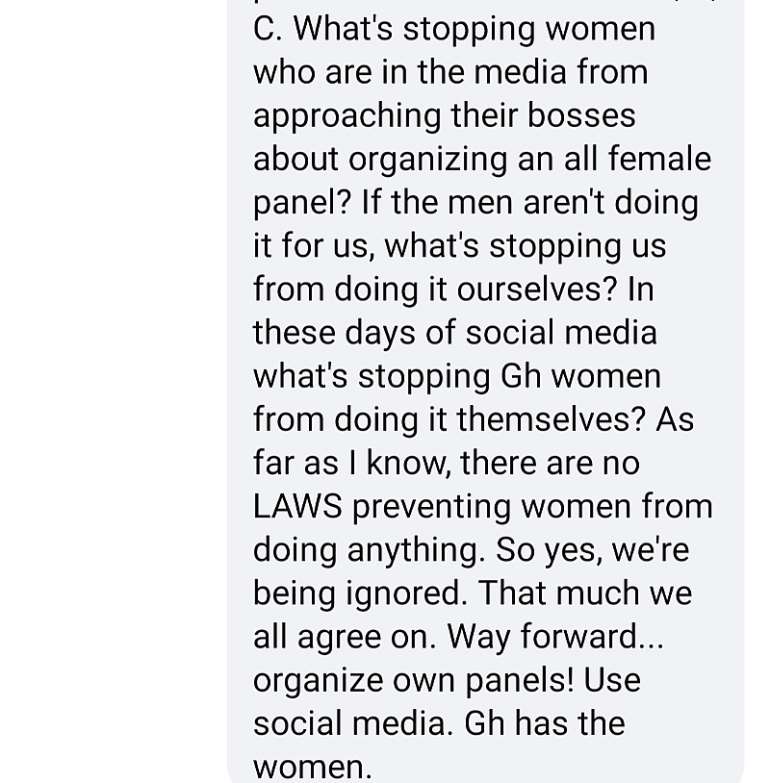 Ghana will only work when we encourage and engage in mature, non-insulting dialogue. So instead of going into a tirade over my resignation, Felicity could have simply offered her solution as to HOW to get women on panels. Saying things such as “women should be included” is not the solution! HOW does she propose women are included? When you tear down an idea, have an alternative one in place. So for example, someone may say ABC, won’t work. Let’s try XZY. Another person may also suggest FGH. Instead of knocking down ideas, bring yours on board. And maybe when everyone contributes, that is when Ghana will find solutions. So the solution to how to get women involved in panels may have come from taking A, adding Z and then adding G. But if you shoot down the person who suggests ABC without offering XYZ, all you’re doing is killing visions, without offering a way out of the mess Ghana is in.

I am not saying the idea of women organizing their own talks is the best or only idea. What I am however saying is, instead of the constant crying, why can’t we organize our own talk, as a way to let event organizers know that Ghana has the women? In these days when you can just organize a zoom chat, why do we feel we can’t do our own events whilst fighting for the men to involve us? Won’t the cries be stronger if the women say “why are you ignoring us? We organize quarterly panels and can confidently tell you there are fully qualified female Doctors, Economists, Politicians, CEOs, etc. etc. etc. that can make a meaningful contribution to the national dialogue.” Imagine how powerful the cry would be when supported with evidence and examples. 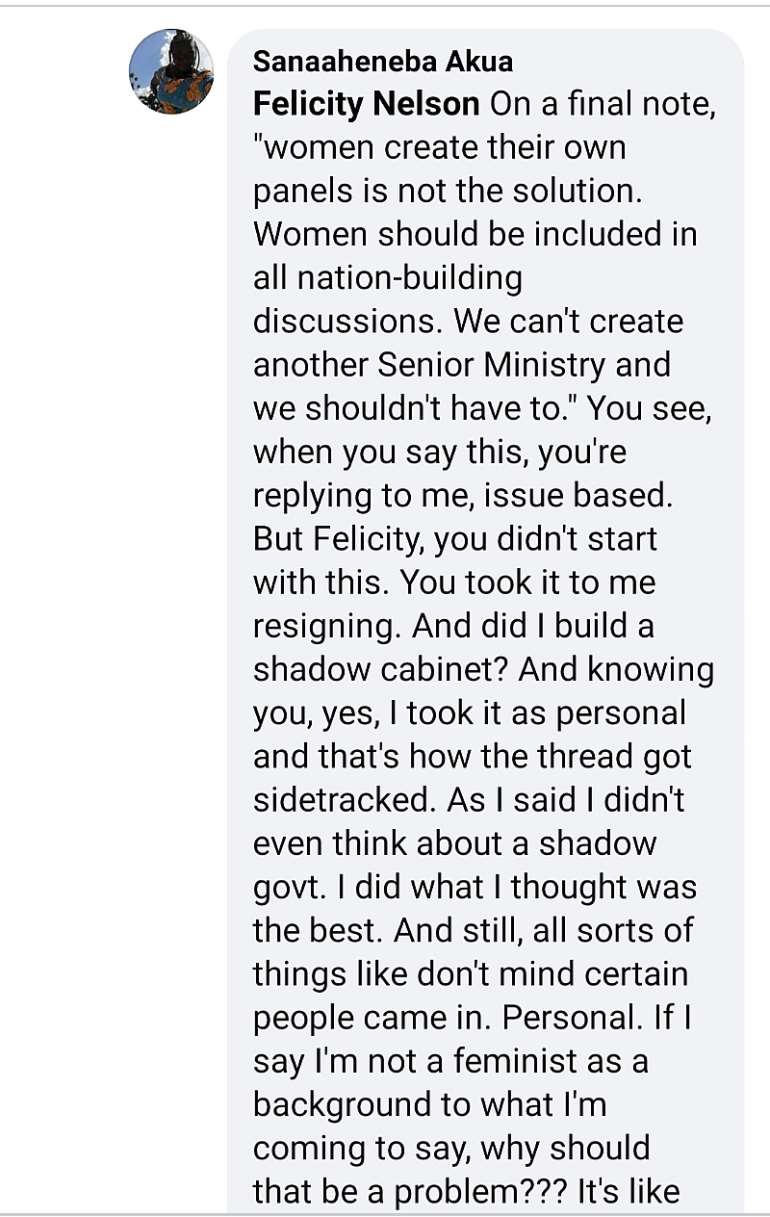 Ghana has a lot of problems. Some of us are naturally thinkers. Ideas come to us effortlessly. Not all are good or workable. But to shoot people down because you hate them and offer no better alternative will do more harm than good in Ghana’s development. From now on now, think Ghana. Think solutions and think less of the messengers that bring the answers Ghana so desperately needs.There are loads of people who have brilliant ideas for Ghana. Don’t shoot them down. Let all suggestions be heard and only shoot them down when you have a better alternative. Ghana can only work when you begin with ideas and suggestions!

But hey, these are just the reflections of an ordinary African woman.

Okada Legalization: Disaster For The Country
5 minutes ago