French police protest against being 'abondoned' by the govenment 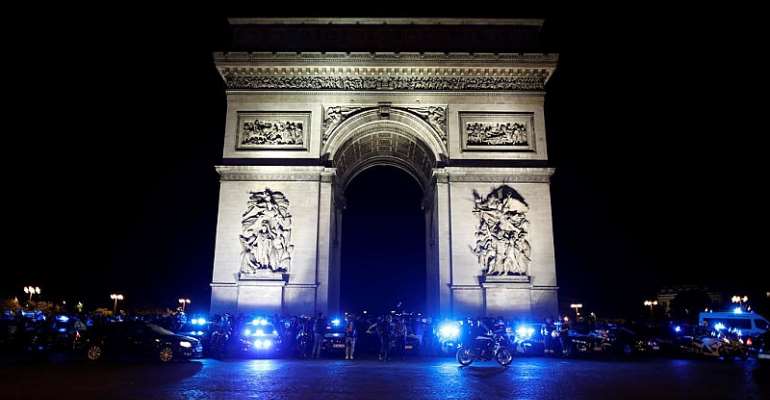 French police held another protest in central Paris on Sunday evening to show their discontent following the televised address of the President Emmanuel Macron. Tension is high after changes to policing techniques announced last week by the interior ministry.

Sirens wailed and lights flashed as hundreds of police officers gathered at Trocadéro in Paris on Sunday night, angry over changes announced by the government that will affect the way certain situations are handled.

It was another protest, the third since Friday and followed on from one held at the Arc de Triomphe on Saturday evening, one on Sunday, on the Champs Elysées, and on Friday afternoon.

"Police are angry over what Christophe Castaner said six days ago," read a message on Twitter posted by observers who witnessed the scene.

It refers to the announcement last Monday made by the interior minister who said the 'chokehold', used by police (leaning on the detainees' neck) during arrests was to be banned.

In his televised address on Sunday evening President Emmanuel Macron made an attempt to appease the situation by saying that police "deserved the support from the state and recognition from the Nation."

"Without Republican order, there's no security, no freedom," he said.

"The order is upheld by our police force and gendarmes across the country. They are exposed to risk everyday in our name."

"We are not reassured by this speech at all, on the contrary," one officer, who had placed his handcuffs on the ground as a sign of protest told AFP.

"What we want are concrete measures, and above all, we want the interior minister to back track on what he said," he explained.

Legitimate anger
David Le Bars, the secretary general of the national police station union told France info that he felt Macron used "strong", meaningful words, which went to the heart of the matter.

But he agreed that the anger in the police force was legitimate. This can be seen by the number of protests held across France in recent months.

"After the President's strong words, now we need to see action. We now need the means to operate on a daily basis." he said.

However, his words were not what many in the police force wanted to hear, and it came on the back of a tense week of protests against police violence and racism.

"Being let down by your own boss, it's terrible!" said another officer, who also wished to stay anonymous.

"We have the impression that it's the street making the rules, and we feel completely abandoned," adding that she would be willing to protest every evening if necessary to have their message heard.

Taser 'not the answer'
Yves Lefebvre, secretary general of the Unité SGP Police union earlier this week called on his colleagues to "stop all interventions and arrests," until their voices were heard.

Christophe Castaner, met with police union leaders on Friday, to discuss his announcement concerning the banning of the chokehold position and the government stance on racism.

For David Le Bars, he says its obvious that police shouldn't be strangling fellow citizens, but that using Taser electric shock guns was not the answer either.

"It's obvious that if police are using force, it's because they are dealing with someone who is breaking the law."

"If you ban a method, then you have to replace it with something else. And we agree that the solution is not to use Tasers," he said.

Request to meet Macron
In terms of how he handled the question of racism in the police force, Castaner admitted that he had "made a mistake", and had been "clumsy" with his words when he said that any police officer should be suspended immediately if there was any "suspicion of racism".

"Not everything is falling apart in the national police service, we shouldn't fall into the trap of caricatures. But we're capable of doing better. We need to pull away from our certainty and accept criticism. We need to get back to basics. Police are not the enemies of the republic."

Several police unions, such as Alliance, have requested a meeting with President Macron and said they will maintain their protests until strong measures have been announced.