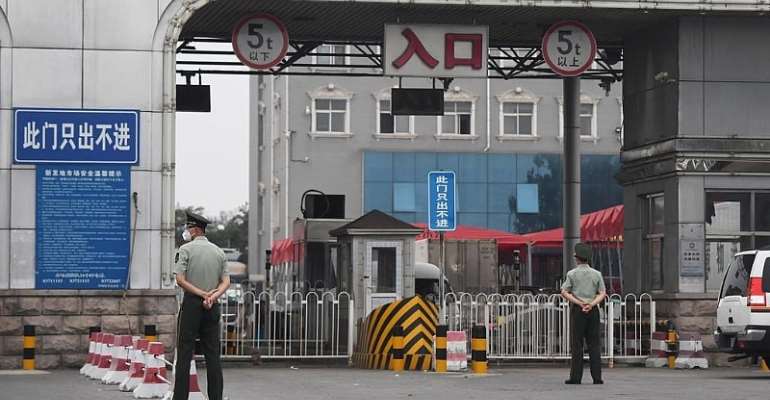 Beijing has begun carrying out mass coronavirus testing after a new cluster linked to a food market raised the alarm and prompted travel warnings across the country.

The deadly contagion had been brought largely under control in China through strict lockdowns that were imposed early this year but have since been lifted.

But a fresh cluster linked to a wholesale food market in the capital has sparked widespread alarm and raised the spectre of a return to painful restrictions.

The National Health Commission (NHC) reported 57 new infections on Sunday, of which 36 were local transmissions in Beijing, all linked to the Xinfadi market.

Another two domestic infections were in northeastern Liaoning province and were close contacts of the Beijing cases.

The 19 other infections were among Chinese nationals returning from abroad.

Liaoning was among several provinces to advise residents against travelling to Beijing due to the new outbreak -- along with cities such as nearby Tianjin and several in Hebei province, which surrounds Beijing.

Some local authorities said people entering from Beijing would have to quarantine, state media reported.

In the capital, lockdowns have been imposed on a very small part of the city that includes 11 residential estates near the market which supplies most of the city's fresh produce.

Officials said Sunday they planned to carry out virus tests on 46,000 residents in the area surrounding the market and had set up 24 testing stations.

Everyone who works at Xinfadi also has to undergo testing.

So far 10,881 people have been tested in the area with another eight cases diagnosed on Sunday. They were not included in the NHC's tally earlier in the day that covered the previous 24 hours.

"I went to Xinfadi market so I want to confirm that I am not infected," a 32-year-old woman surnamed Guo told French news agency AFP as she queued in scorching heat at a stadium waiting for a virus test.

"We were told that after the tests... if it is positive, we will be taken directly to the hospital."

Lockdowns and closures
One of Sunday's new cases was a 56-year-old man who works as an airport bus driver and had visited the Xinfadi market in early June before later falling ill, state-run People's Daily reported.

The meat section of the huge, sprawling market was closed Sunday and AFP reporters saw hundreds of police officers and security personnel plus dozens of paramilitary police blocking access.

Efforts to trace those who had visited the market have begun, with companies and neighbourhood communities messaging staff and residents across the city to ask about their recent movements.

A vegetable market adjacent to Xinfadi was open Sunday and trucks were arriving to deliver or collect stock.

"But anyway I have no choice -- I am part of the lowest class of society. So I have to keep working in order to make a living."

In nearby streets, residents were under lockdown and restaurants closed.

Some people used a wooden stepladder propped against the gated entrance to one community to pass supplies to loved ones.

A resident surnamed Chen told AFP he had made several trips with his car to the front gate of his compound to deliver food.

"As soon as I finish delivering the supplies to my family members, I will go upstairs to join them," he said.

"After that I won't be able to get out."
Food safety inspections
Covid-19 first emerged late last year and one of the first clusters was from a market in the central city of Wuhan that sold wild animals for meat.

The latest outbreak in Beijing has turned the spotlight on the hygiene of the city's food supply chain.

State-run media reported that the virus was detected on chopping boards used to handle imported salmon, and that major supermarkets had removed the fish from their stocks.

City authorities have closed nine schools and kindergartens near Xinfadi, while sporting events and cross-provincial tour groups have been stopped.