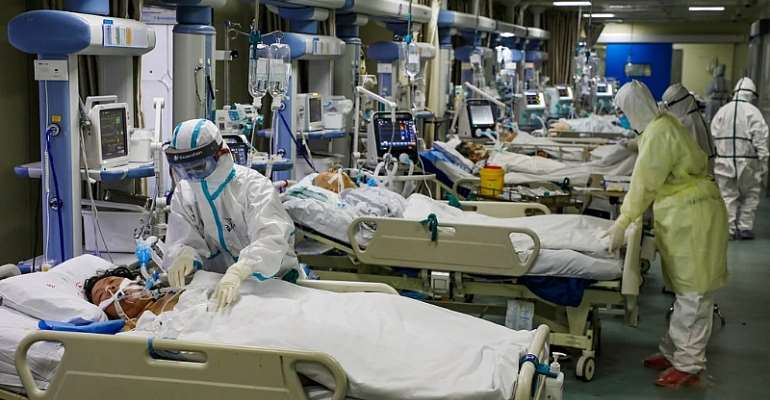 After a new infection focus was discovered in a market in China's capital, the affected area is in an emergency mode like in wartime. Investigators have traced the virus back to a chopping board that processed imported salmon.

Beijing is experiencing a major outbreak of the coronavirus for the first time in many weeks. In the initial 500 tests on the Chinese capital's wholesale market, 45 infections had already been discovered. The Xinfadi market in the Fengtai district, which supplies around 90 percent of the vegetables and fruits of the 20 the million-metropolis, was closed. In the area, eleven residential areas were closed off and nine kindergartens and primary schools closed. Around 10,000 dealers and employees of the market are to be tested.

The affected area is in a wartime emergency mode, a local official told journalists. Local traffic was stopped and roads in the area were blocked by the police. A nearby bus station has suspended operations until further notice, and sports events have been canceled, state media reported.

Investigators have traced the virus back to a chopping board that was used to process imported salmon, as the head of the Beijing Qingnianbao wholesale market reported. The salmon came from another seafood market. Many supermarkets in Beijing then took imported salmon off their shelves. It was initially unclear whether the fish came from Norway, from where a lot of salmon is imported to China.

The meat and Jingshen seafood markets had already been closed by the authorities on Friday. The news reporter AFP reported a massive police force in front of the facilities. Nobody was allowed to leave the Xinfadi market. Beijing's market surveillance authorities ordered a city-wide inspection that focused on fresh and frozen meat, poultry, and fish in supermarkets, warehouses, and catering services.

The Xinfadi market is the largest in Beijing and has an area of 112 hectares - the equivalent of around 150 soccer fields. It should be disinfected "comprehensively". A large contingent of security forces marched to secure the site. Other markets in Beijing also had to close their gates for investigation. The Global Times newspaper cited experts who believe food supply to the capital may be affected.

Fear of the second wave of coronavirus From Thursday to Friday, seven new infections with Sars-Cov-2 had already been reported in Beijing - the first local infections in the capital in one and a half months. According to China Daily, everyone had a connection to the Xinfadi market, which the investigation then focused on. According to local media, the 45 infected initially discovered in the first tests show no symptoms at first.

The new cases raised fears of a second wave of infection in China, which has so far largely managed the outbreak. In Beijing, all security measures were tightened immediately. China recently reported only a few infections, most of which were imported from abroad. China's capital had been particularly protected since the pandemic in Wuhan, central China, six months ago, and was more isolated from the rest of the country than other cities. The strict security measures had only been relaxed a few weeks ago.

Security measures should be tightened The capital's COVID-19 crisis team announced plans to tighten controls on cargo and travelers upon entry to prevent the virus from spreading further. China is no longer issuing visas to foreigners and is restricting the entry of Chinese returning home by severely restricting international flights and requiring corona tests and 14-day quarantine.

Beijing has 98 laboratories that have a capacity of more than 90,000 tests per day, a spokesman for the city's health commission said, according to the China Daily. "It will be enough to meet the need." In the metropolis of eleven million Wuhan, where the virus was first discovered in early December, the authorities tested almost ten million people in the second half of May. Only 300 asymptomatic cases were discovered.

Already in Wuhan, a seafood market, where wild animals had also been sold, was suspected to be the possible source of the outbreak of the lung disease Covid-19, which has spread throughout the world since then. More than seven million infections have been counted worldwide, more than 400,000 people have died.