By Helen Roxburgh, with AFP Bureaus 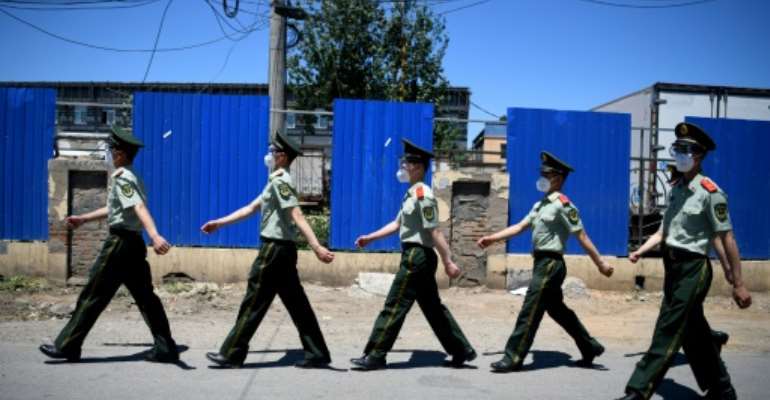 China reported 57 new cases of the coronavirus on Sunday, deploying paramilitary police to quell a fresh outbreak in Beijing. By NOEL CELIS (AFP)

China reported its highest daily number of new coronavirus cases in months on Sunday, warning of a second wave as more European countries prepared to reopen their borders.

The shock resurgence in domestic infections has rattled China, where the disease emerged late last year but had largely been tamed through severe restrictions on movement that were later emulated across the globe.

It also gives a bleak insight into the difficulties the world will face in conquering COVID-19, coming as many hard-hit European countries have seen an encouraging drop in contagion and prepare to welcome visitors from elsewhere on the continent.

Of the 57 new cases logged by Chinese authorities, 36 were domestic infections in Beijing linked to a large wholesale food market that has been closed and nearby housing estates put under lockdown. 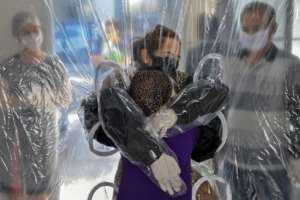 A woman hugs her sister-in-law through a plastic sheet at a seniors' home in Sao Paulo, Brazil. By NELSON ALMEIDA (AFP)

"The meat sellers have had to close. This disease is really scary," said a fruit and vegetable trader surnamed Sun at another central Beijing market, adding there were fewer customers than normal.

The Middle East's hardest hit country Iran reported its own grim uptick on Sunday, recording more than 100 new virus deaths in a single day for the first time since April 13.

"This is an unpredictable and wild virus and may surprise us at any time," health ministry spokeswoman Sima Sadat Lari said.

More than 430,000 people worldwide have died from the respiratory illness, nearly halfway through a year in which countless lives have been upended and the global economy ravaged.

The total number of confirmed cases has doubled to nearly 7.8 million in slightly over a month and the disease is now spreading most rapidly in Latin America, where it is threatening healthcare systems and sparking political turmoil. 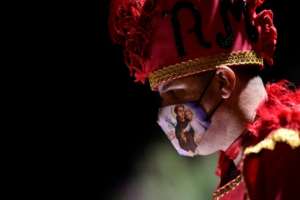 The disease is now spreading most rapidly in Latin America. By DOUGLAS MAGNO (AFP)

Brazil now has the second-highest number of virus deaths after the United States, and the Chilean health minister resigned on Saturday amid a furore over the country's true number of fatalities.

In the US, more than a dozen states -- including populous Texas and Florida -- reported their highest-ever daily case totals in recent days.

The pandemic has put pressure on healthcare systems across the world, and surging infections have exposed a deadly shortage of hospital beds in India's capital.

"They don't care whether we live or die," said Kashish Jain, whose father died from coronavirus in the back of an ambulance as his family raced around Delhi, pleading with hospitals to take him.

"It won't matter to them but I have lost my father, he was the world to me," she said, tears welling up. 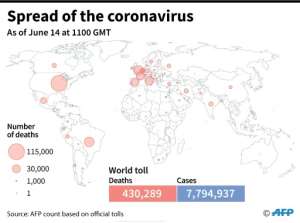 A world map showing the official number of coronavirus cases per country. By Simon MALFATTO (AFP)

Many European nations are further lifting painful lockdowns that have saved lives and forced caseloads down, but have also withered economies and wearied confined populations.

The EU has recommended that member states fully reopen their frontiers with each other from Monday, but the border reopenings have been far from harmoniously coordinated.

Poland has already allowed people from other European Union countries to visit, and Germany said it would end land border checks on Monday.

Spain said Sunday it will reopen its borders to EU countries -- except for Portugal -- on June 21. 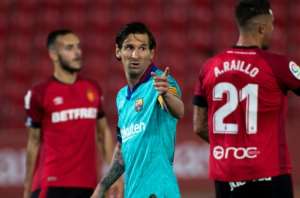 A beardless Lionel Messi returned to the football pitch with a goal and two assists as Barcelona thumped Real Mallorca. By JAIME REINA (AFP)

France has said it will gradually reopen to countries outside the borderless Schengen zone from July, with President Emmanuel Macron set to give a speech on Sunday detailing plans to further ease restrictions.

In another joyful return to semi-normality, football superstar Lionel Messi took to the pitch again in Spain as Barcelona resumed their La Liga title challenge and thumped Real Mallorca 4-0 in an empty stadium.

But stadiums have been full in New Zealand, with 43,000 rugby fans watching the Auckland Blues beat the Wellington Hurricanes on Sunday.

There have been wobbles in sport's much-awaited return -- Australian rugby league officials postponed a top-level game hours before kick-off due to a coronavirus scare.

The pandemic has not meant economic ruin for everyone -- postal services have been boosted by populations working from home and shopping online.

"It's been like Christmas," said Sahir Saeed, a postal worker for Britain's Royal Mail.

"We do feel really appreciated and loved."