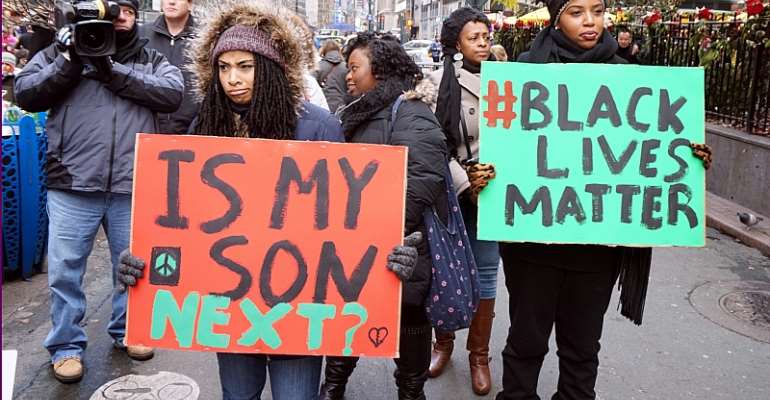 Color line was created in the 1600 by laws in Virginia to divide and conquer people along the "racial" line. It may have been shattered or cracked into partial pieces by the children of the same white, black, red and brown people demonstrations around the world. Before then, it was Pope Nicolas the V in 1442 that gave Portugal the Papal bull to capture Africans for slave labor.

It is not yet Uhuru! Despite all the atrocities thrown at Africans, they preached forgiveness, love and only longed for happiness in return. As much as many Africans would like to forgive and move on, they are constantly shocked into the reality of their predicament. In 1962, John F. Kennedy famously said, "those who make peaceful revolution impossible will make violent revolution inevitable."

300 years of reforms: baptism, religious converts, schools, piety, abolition, etc. have not changed economic subjugation. If anything, grandfathers, mothers and children from different generations have been told change would come peacefully, not by violence. At the same time, they are denying that Systemic Racism still exists. If they were blind, we could say they cannot see but since they are white, they are defending their privileges and can gather enough blacks to reject claims of Systemic Racism while blaming racism on the violence of individual victims.

The same religious pieties that pray with slaves urging them to wait for their reward in heaven while 84% of regular Church goers turned around recently and voted for the most extremist conservative parties in America and Europe. They encouraged worshippers of those that fought against abolition of slavery and revere Christopher Columbus that decimated the American Indians after he was rescued from the Sea. The celebration of traitors against their Country and slave owners entrenched old Privilege as justification for slave labor speaks louder than voice. Oh, they can always apologize and postpone the day of reckoning until judgment day in heaven. They want to go back to the Good Old Days when Africans had no Right. But Harold Washington, the first African Mayor of Chicago rejected it as the worst days of slavery for Africans in America.

Bitterness comes out of hopelessness of the oppressed. When black university graduates earn the same as white high school graduates or you have to do two or three jobs to eke a living while whites with the same skill and qualifications earn and live better than you on one salary. You know it is not fair.

George Floyd's video of Police snuffing precious life out of him in broad daylight was the last straw that broke out the silent majority demonstrating against injustice. But only African families know of many more not carried on televisions or videos. Suppression of peaceful expression of anger by Civil Rights demonstration as dissent encourages a vicious circle of another violence. It was a reminder evidence that Lynching in broad daylight did not end after the 1960s Protests by Africans in America. It is now carried out by the code words of Law and Order. Not different from world dictatorships.

Violence is the cry of the voiceless: it is the difference between those crying for change, those that are hungry; from those that are labelled as criminals. These threats of racial, ethnic, xenophobia and afrophobia kill their African victims slowly like other insidious diseases. It may not show an open wound but it is just as deadly as hypertension.

Our basic natural defense against hate comes from Flight or Fight. This applies to all animals including humans regardless of race or ethnicities for survival. As soon as the threat is over, we default back to our normal selves and all the biological hormones needed for defense preparedness are reset.

When provoked, animals including humans are created to fight when backed to the wall. An indication to live or die fighting for dear life. When you push people into violence by violence and decide to quell even peaceful demonstration by violence, it becomes a self-fulfilling prophecy. Ironically, that same natural Response is a Death sentence in the hands of Police among Diaspora Africans and some African countries.

So Africans coach their children on Restrain when questioned by Police. It is only the whites that can boldly demand reason for staged or unnecessary Police intrusions. Any black that refuses to be domesticated in the Diaspora hostile environment is a rebel that must be subdued by "legal" force. We remember the case of Louis Gate, the Harvard Professor, exhausted after returning from an international trip trying to get into his own house. The police sergeant called by his neighbors who knew he had some leg problem, coded him "uncooperative" for backup!

There is more, in terms of ability to cope under such constant emotional pain and interaction, it adversely affects our loved ones and others. Since the hostile environment degrades our well-being regardless of which community we are, our response could also be a double edged sword.

Nevertheless, Fight or Flight is easily indicated as elevated blood pressure demonstrating that our defences are on high alert. The problem starts when only blacks are on constant alert in a hostile and intolerant environment. Anxiety of High blood pressure then becomes a disease

putting additional stress on the blood vessel walls, making them stiffer and decreasing the amount of blood that flows through the body affecting most organs of our body from damage to the blood vessels of the brain, to the heart and kidneys that may result in a stroke, heart failure, kidney failure, obstructions (thrombus), to vessels in our legs.

You could be Louis Gate, Nelson Oyesiku or Philip Ozua in a New York Times article that claimed he Fought Two Plagues and Only Beat One: I know the cumulative burden of those experiences day after day, week after week, month after month, decade after decade. https://www.nytimes.com/.../coronavirus-racism-montefiore-medicine.html Therefore, those at risk of dying from hostile environments on a daily basis are more than those dying from Covid-19!

Their argument is that without law and order neither properties nor lives can be preserved. This general agreement empowered constituted authorities to give Police maximum discretion to use force with immunity even when charged to the Court of law. The division between conservative and liberal ideologies has to do with emphasis on the protection of properties or lives. Both value property and life but differ on which is needed to preserve the other. Both can be done fairly.

Favoritism and Privilege favor the elites and their families. Their corruption favors leaders and their cronies with devastating problems for the average man on the Main Street economy. Nobody or generation gives up Privilege without a Fight or Flight at the risk of the lives of Oppressed and Oppressors, otherwise real change will never come.

The only other way out is what we are witnessing right now as white children of the Oppressors see through the hypocrisy of their parents and decided to demonstrate with the Oppressed in larger numbers. This has never happened since the 1600s when we were divided and conquered on imposed color lines. This generation regardless of skin color assigned, woke up in large numbers and decided enough is enough. Put an end to injustice.

On June 12, 2020 The City of Boston that had its own history, declared Racism a Public Health Crisis.