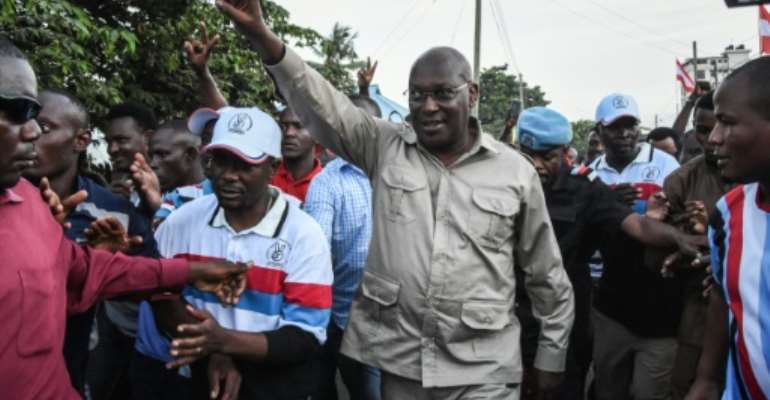 Tanzanian opposition leader Freeman Mbowe, pictured on March 14 after being released from jail over a protest against President John Magufuli. By Ericky BONIPHACE (AFP/File)

Tanzanian police said Friday that they had doubts over opposition leader Freeman Mbowe's claims he was attacked, as their investigations had yielded no evidence.

Mbowe was ambushed by unknown assailants as he returned home late Monday in the capital Dodoma, and rushed to hospital with injuries including a broken leg, his Chadema party said in a statement.

The party described the attack as "politically motivated".

Tanzanian police spokesman David Misime said there was no evidence Mbowe had called for assistance during the midnight attack, and that there were people near the scene who did not see or hear it take place.

Mbowe stopped at a family member's home before going to the hospital, "without even notifying (there was) a young man at his home," Misime said in a statement.

The only evidence of an attack were the statements of Mbowe and his driver, Misime said, "which raise doubts about the truth of the incident".

The police statement claimed that when Mbowe arrived at the hospital he was drunk.

On Wednesday, Chadema deputy chairman Tundu Lissu defended Mbowe in a spoeech, saying drinking was not a crime in Tanzania.

Via Facebook, he said the police comments were aimed at "weakening the weight of the incident and legitimise the attack. Some people just want to divert the discussion of the issue."

In 2017, Lissu was shot several times near the place where Mbowe was attacked.

Lissu, who last week announced his intention to run against Magufuli in October elections, lives in self-imposed exile in Belgium where he was treated after the shooting.

Chadema said on Thursday that Mbowe was recovering at Aga Khan Hospital in Dar es Salaam where he was transferred for further treatment for his broken leg.

A high-profile critic of President John Magufuli, Mbowe has repeatedly accused the government of covering up the extent of Tanzania's coronavirus outbreak and failing to take the pandemic seriously.

Mbowe's attack was condemned by other opposition parties, rights groups, the European Union head of missions and the UK and US embassies in Tanzania which called for quick investigations, identification and prosecution of those responsible.

Chadema has faced increasing hostility under Magufuli, who took office in 2015 as a corruption-fighting "man of the people" but has been criticised for his authoritarian leadership style.

Voter Exhibition Chaos: Tension Brews At Binduri As 400 Out ...
48 minutes ago