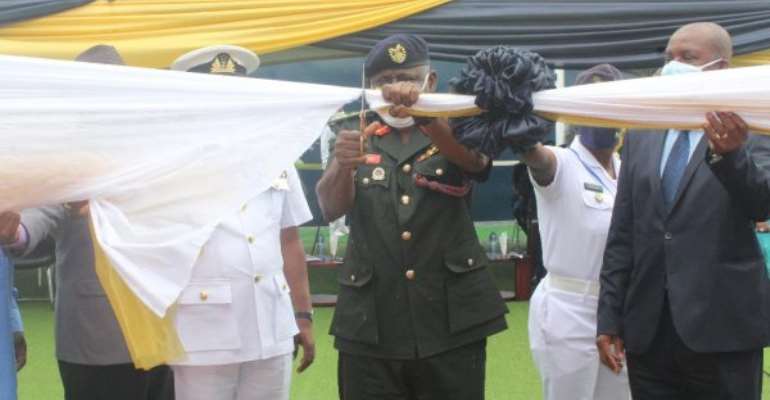 The Ghana Navy has finished and commissioned a fully-furnished 16-unit accommodation block to serve as a transit residence for officers posted to Accra for operational and administrative duties.

The Block, KP Fiadoo Lodge, was named after Rear Admiral Peter Kofi Fiadoo, the immediate past Chief of Naval Staff, will minimise the struggle to find decent accommodation for officers in transit.

Each unit of the block, sited in the Naval Wardroom, near the Jubilee House, in Accra, comprise a bedroom, a hall and a kitchenette.

Additionally, it would provide opportunities for young officers to imbibe the tradition of the Army and important values such as etiquette, integrity, teamwork, and morale.

“The role of the mess in developing and strengthening professionalism in the military cannot be overemphasized,” he explained.

Lt. Gen. OB Akwa said inadequate accommodation had posed a serious challenge to officers but the Military hierarchy was working in partnership with the government to address the problem.

He commended the Present and Past Commanders of the Navy, especially Rear Admiral George Mawuli Biekro, Rear Admiral KP Fiadoo, and Rear Admiral Seth Amoama, the Chief of Naval Staff, who he said, joined their efforts towards the successful completion of the edifice.

He said the decision to name the edifice after Rear Admiral KP Fiadoo was most appropriate and well deserved, especially for his invaluable contribution towards its construction.

The Chief of Defense Staff urged the Unit leadership to ensure the maintenance of the building with all its facilities for the use of future generations, saying, “I entreat the Mess Committee to put in the necessary measures to avoid the incidence of fire and other domestic accidents.”

For his part, Rear Admiral S. Amoama said the project was initiated in 2015 under the leadership of Rear Admiral Biekro.

However, it stalled for some years after old structures were demolished, the site was cleared and the site had been hoarded because of lack of funds.

In September 2018, it was reactivated with Internally Generated Funds and awarded to Edrick Construction Services.

The Mess, Rear Adm said, was the home of living-in personnel, the club of all members, and the centre of military social life in every unit, noting that with the anticipation of an increase in living-in members, social events would be reaching a crescendo.

Rear Adm Fiadoo said: “I am truly elated to witness the completion of this project, explaining that, it was not only because the project began during his tenure, but also of the joy of witnessing the solution to some of the perennial accommodation issues.

He said some officers, hitherto, resorted to renting guest houses or similar facilities while they were in transit.

Madam Patience Danso Abiam, the Chief Executive Officer of Edrick Construction Services, said all the three successive leaders involved in the project were passionate about it.

She said there was provision for all modern amenities, such as air-conditioners, washing machines, water heaters, and gas cookers, adding that the beautiful scenery had been created for the comfort and wellbeing of its occupants.