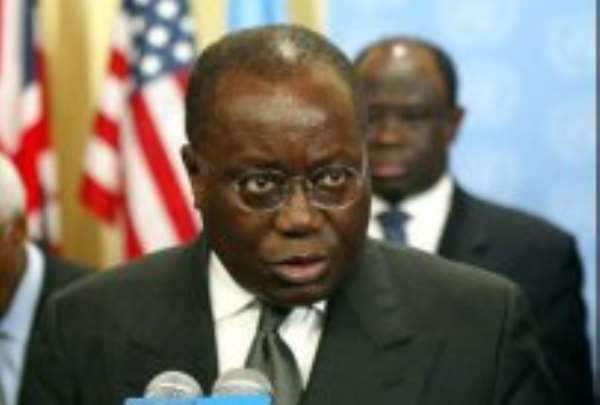 Accra, June 27, GNA - The Minister of Foreign Affairs, Nana Addo Dankwa Akufo-Addo on Tuesday left Accra for Banjul, The Gambia, to participate in the ninth Ordinary Session of the Executive Council of the African Union to be held from June 28 to June 29, 2006.

A statement signed by Mr Jefferson Kwamina Sackey, Media Relations, Office of the Minister, said the Session would among other issues, adopt the agenda for the seventh Session of the Assembly of Heads of State and government of the African Union scheduled for July 1 to July 2, 2006 in Banjul, The Gambia.

The theme for the Summit is: "Rationalization of Regional Economic Communities and Regional Integration."

It said the summit, which would also be attended by President John Agyekum Kufuor, would also mark the commemoration of the 25th Anniversary of the African Commission on Human and People's Rights. Nana Akufo-Addo is expected to return to Accra on July 2, 2006.